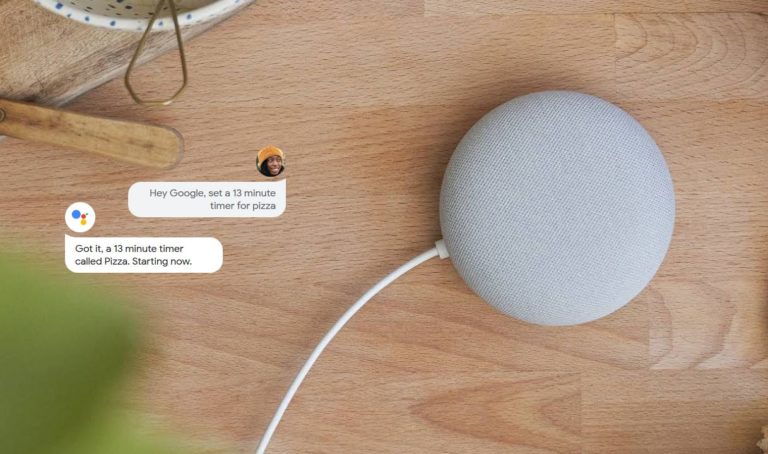 The Google Nest Mini is the update to the original Google Home Mini. The aim – make it sound better! Although that is like little small dog syndrome – a big yappy bark instead of a throaty growl.

To be fair, the original Google Mini was the perfect, low-cost way to add OK Google to your home network. But it’s sound signature was for clear voice, not music. The Google Nest Mini does sound a little better.

What about Nest? The Google Nest Mini is part of its rebranding reflect the move of all its smart devices to the Nest sub-brand.

So what has and has not changed with the Google Nest Mini?

How does the Google Nest Mini sound?

In our original review, we said, “The Mini is a single speaker capable of 80dB volume. It has no bass, reasonable mids and then treble drops. This is called a mid-sound signature. It is fine for mid volumes as a personal speaker but gets way too harsh at higher volumes.”

Sorry Google but we just don’t see the 2x Bass improvement – oh, wait, two times nothing is… Volume-wise the Google Nest Mini is a tad behind (77dB) versus the old Mini (80dB) – and that makes it sound a little less harsh.

While the Google Nest Mini does have a vague whiff of middle and high bass, it is not really evident when listening side-by-side (as these tests were).

Interestingly both become flat (good) from 236Hz (low-mid) and are almost identical to 10kHz (Dog Whistle) where the Google Nest Mini quickly drops off the cliff at 15kHz and the Home Mini gracefully descends to the full 20Hz.

So as far as a sound signature goes both are Mid-centric which is best for clear voice. The Google Nest Mini has a slightly rounder sound and is a little less harsh at full volume because of a lower upper-treble response and a slightly lower volume.

The changes are all good, and it is a worthy successor to the Home Mini. It still is a long way from being a music speaker, BUT YOU DON’T BUY IT FOR THAT. You buy it for OK Google.

In our original Google Home Mini review, we rated it and the Google Home speaker at 4.2-out-of-5. In part that was value for money.

Since then there has been a raft of far better audiophile speakers. While our OK Google August 2018 ‘shootout’ is slightly out of date, it shows that you have to spend somewhere between $200-600 to get a really decent sound.

Our pick of them all is the LG WK7, 24-bit/96Hz upscaling speaker that is on special at JB for $199. Just click the link above to see what an OK Google speaker can sound like.

Since then Google has its new Nest Hub ($349 for speaker and 10” screen), and you have excellent offerings from Lenovo, Sony, JBL and more.

The Smart Speaker battle is over – at least in Australia. Shopping behemoth Amazon has lost.

A later report on smart speakers with a screen puts Google’s then single offering launched only two months prior at 41.5% versus Alexa Echo Show at 13.2% (source Voicebot.ai).

VoiceBot stated, “Amazon’s share seems to be coming from its paid Prime members who were 50% more likely to buy the Alexa speaker”. Tellingly the vast majority clearly bought OK Google based speakers.

Features
Value for money
Performance
Ease of Use
Design
Reader Rating0 Votes
The cheapest way to get Google Assistant (unless you find a Home Mini at a giveaway price)
On-board machine learning means slightly faster response
Far-field mic has improved
Still a mid-centric sound signature for clear voice
Not a speaker you want to listen to [good] music on
4.2