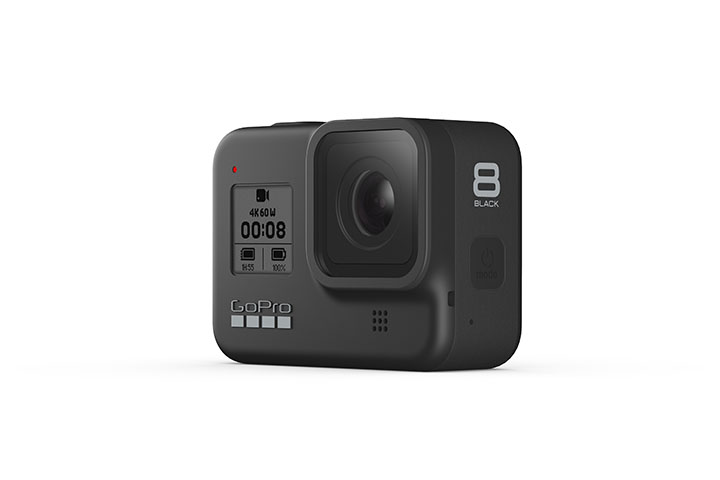 Was it only three months ago that we reviewed the GoPro Hero 7 Black? Absolutely. And now its – not replacement, but successor – the GoPro HERO8 Black action camera is here. And it’s here at the same $599.95 price as the earlier model. The 7 remains, though, at the reduced price of $529.95.

At first glance, the GoPro HERO8 looks like the subtlest of moves from the Hero 7. It’s still a very compact unit. It has the colour screen occupying just about the whole of the back, the camera lens at top right on the front with a small monochrome status display next to it.

But, no, it’s quite different, with an expansion of internal features and marked changes to the outside. The first change: it’s bigger on a couple of dimensions, but also smaller. It’s heavier, but also lighter.

But it’s also smaller. You see, if you flip the HERO8 Black upside down, you’ll see two odd looking tabs folded into its base – GoPro calls them “floating fingers”. Flip both of them out and they form a standard GoPro twin-tab mount. To mount the Hero 7, you have to insert it into the included frame. With that in place, the Hero 7 is both wider and taller than the GoPro HERO8 Black.

Like the Hero 7, the HERO8 Black is waterproof to ten metres without a housing. If anything, it’s probably easier to keep watertight because it has only one door instead of two. That’s on the side and it houses the battery (the same one used by the 7 and 6), the microSD card (up to 256GB) and the USB Type-C port.

There is one arguably backwards step with the GoPro HERO8 Black compared to the 7: it no longer has a microHDMI output port. The USB Type-C port is the only connection. I think it was a change worth making because with the reduced space demands, the need for a second door is removed. And if you are keen on better I/O, then in coming months you’ll be able to purchase a new “Media Mod” ($129.95) for the GoPro HERO8 Black. This is like an oversized frame for the HERO8 Black. It includes a directional microphone (there’s a microphone on the front of the HERO8, so I assume this one is better), two “cold” shoes for mounting accessories, a USB Type-C port, a microHDMI out port and a 3.5mm microphone in port.

Basically, add the Media Mod and you’re started to turn your GoPro HERO8 Black into a powerful media capturing device.

Included in the box with the GoPro HERO8 Black is the battery, a USB charge cable, a curved adhesive mount, a clip-in attachment compatible with standard GoPro fittings and the necessary screw to clamps things down. Not included with the unit is a standard 1/4-inch camera tripod adaptor.

There is a wide range of other accessories including (coming soon) a flip up display and an LED light source (you need the Media Mod for them), plus batteries, chargers, all manner of mounts and protective cases, including an underwater one to allow more than 10 metres of depth.

As for functionality, take the Hero 7 and add about 20% and you’ve got the HERO8.

Oh, yes, a couple of things have been taken away. There are no longer 720p and 960p video modes, but do you need them? The 1080p slow motion mode goes up to 8x. The old 720p and 960p slo-mo were the same speed for no particular advantage.

4K still goes up to 60 frames per second and 2.7K up to 120 frames per second. (1080p? up to 240 fps). And maximum bitrates are up to 100Mbps instead of 78Mbps. TimeWarp video – which is kind of like an automated, smoother Time Lapse video, now comes in version 2.0, although it’s unclear what changes. Likewise, the HyperSmooth digital video stabilisation now also comes as version 2.0.

In addition to the standard “Wide”, “SuperView” and “Linear” fields of view, there’s now a tighter “Narrow” one. HDR on photos has been improved. A “LiveBurst” photo mode has been added. RAW format stills can be captured in all photo modes now. In addition to the 7’s time lapse video intervals from half a second to one minute, two, five, thirty and 60 minutes have been added.

It seems that the GoPro HERO8 is a tough little unit. You see, it had clearly been in use by someone else before it got to me and had not been properly secured on the mount inside the packaging. And that meant it was rattling around inside the hard box, along with various accessories, during transportation. But it all worked fine.

Once I worked out how to open the door, I charged it up and went through the menu system on the rear display to find the factory reset option. A few seconds later, a mini-wizard guided me through the start of setup as though it were new from the box. After a couple of steps it tells you to do the rest with the GoPro app (iOS or Android).

The app soon found the GoPro HERO8 Black and, in my case, and suspect most others’ cases, it informed me that there was a firmware update available for the camera. I let it do its stuff and after five minutes, it was ready to go.

One other thing that was different is that the GoPro HERO8 Black relies heavily on defined, named presets for choosing the video format. You can edit them and create new ones, setting things like resolution and whether you want HyperSmooth on and the field of view. It kind of forces a little discipline on one, but it pays off because it makes you think what settings are best in different circumstances. I created one called “Bike” very easily, just by changing a couple of settings in one of the existing presets. Thereafter all I had to was select that.

GoPro HERO8 Black in use

The first thing to note was that it was a genuine pleasure not having to fiddle with the mounting frame. The 7 was always a tight fit in the frame and it took careful manipulation to get it in and out. And you had to have it out to open the two hatches to access the connections USB connection and battery.

I already had a GoPro-style mount on my bike, so putting the GoPro HERO8 Black into place was the work of a few seconds. I switched it on, pressed the record button and rode off.  I had the “Bike” preset set to 4K at 60fps with HyperSmooth on. Two thirds of the way through my ride I stopped and switched HyperSmooth off.

On playback – both on my 32-inch computer monitor and on a 65-inch Panasonic OLED TV – the results were stunning. HyperSmooth simply eliminated almost all the bumps in the video. And believe me, as the person sitting on the bike, there were bumps aplenty, from the driveways entered and exited, across the expansion cracks on the concrete surface, and the tree litter on paths. The result was smooth, yet sharp and detailed.

With the Hero 7 I’d noticed some loss of detail in the faster-moving parts of the frame (that is, the parts close to the ground). That seemed far less evident with the GoPro HERO8 Black. Maybe that’s one of the improvements of HyperSmooth 2.0.

But, but. When I switched it off and resumed my journey, the resulting video had its own special charm. Yes, it was juddering all over the place. But one of the virtues of a wide-angle lens is that the change in angle caused by vibrations constitutes only a small part of the picture. In exchange for a clearly more jittery ride, there seemed to be a slightly increased sense of sharpness.

I’d suggest experimenting before settling on whether you want it on or off. HyperSmooth 2.0 does an astonishingly good job. But you may want it off for artistic reasons.

I also gave TimeWarp Video a run. That was a lot of fun. I put a mount on my car’s windscreen, left TimeWarp in auto mode and went for a drive. It’s like Time Lapse, but smoother, less juddery.

Since I did that one with the camera upside down, the video was tagged internally for inverted playback. That worked fine on the computer (I used VLC) but the current model Panasonic OLED played it back upside down. I guess it doesn’t read those tags.

The photo quality was fairly good. About as good as one of the better-quality phones. I’ve shown three fields of view – Wide, Linear and Narrow – on this page. By my calculations, Linear is about 1.4x zoom, while Narrow is about 1.65x zoom compared to Wide.

HDR, also illustrated on this page, brightened up dark areas, revealing more detail in them, and also made the sky bluer rather than leaving it washed out as it was in the other shots.

RAW, surprisingly, produced a smaller-sized image than the corresponding JPEG version: 5.1MB versus 9.9MB. It was softer, noisier and lower in resolution, showing the work that the GoPro HERO8 Black puts into its processing. You’re going to have to be pretty decent with Photoshop to get a result from RAW as good as GoPro’s own processing.

One slight irritation: the resulting still photos are tagged in the “Caption” field with something like “DCIM100GOPROGOPR0041.JPG”. That’s the folder, sub-folder and filename of the photo, without the slashes. Weird. And if you’re using the photos on-line, you’ll probably have to go and empty the field if you don’t want silly-looking captions.

There are three main ways of getting your videos and photos out of the GoPro HERO8 Black onto a computer for further work. One is to use the GoPro app. You can also remote control and change the settings of the HERO8 Black using the app and take photos and videos. That can be especially useful where you need the camera to remain steady.

Transferring that way tends to be fairly slow. The phone established a Wi-Fi connection to the camera. When downloading a 500MB video it took many minutes.

Another way is to pop out the microSD card and put it in a card reader or the slot of an appropriately equipped computer. You might be able to get the card out of the GoPro HERO9 Black if you have petite fingers. Space is tight in there. I used a small screwdriver to push in the card to release the catch (and also to push it in again when re-inserting it) and then a pair of tweezers to grab the card.

The best way is to use a proper USB 3.0-rated Type-C cable and plug it into the USB socket on the camera. I copied across 4.55GB in files in one minute and fifteen seconds for an average speed of 62.2MB/s.

There are a stack of other features I haven’t gotten into here: voice control for one. You can read about them here. In all sensible ways, the GoPro HERO8 Black is a significant upgrade over the 7, yet keeps the same price. Given that GoPro largely established the field, and continues to set standards, it should definitely be on your shortlist for action cameras.

Features
Value for money
Performance
Ease of use
Design
UltraHD recording up to 60p
Excellent stabilisation
New presets for easier operation
Built-in tabs for use with GoPro attachments
No 1/4-inch tripod adaptor included
4.6