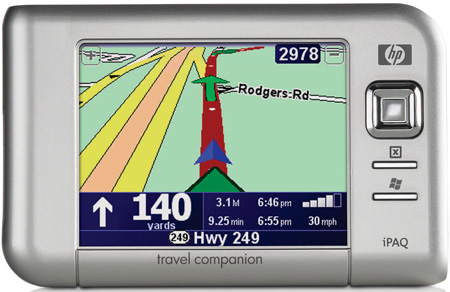 GPS systems are popular amongst gadget fanatics right now, but there’s an inherent limitation in what they can do if they’re just GPS systems – sure, you can use them to get from point A to point B, but once you’re there you’re stuck with an expensive paperweight until it’s time to move again. Plenty of GPS models are incorporating extra features, such as Navman’s NavPix technology in order to broaden their appeal, but we’re particularly fond of the hybrid GPS/PDA (Personal Digital Assistant) idea. This incorporates a GPS into an existing or new PDA model, letting you carry everything from business documents to movie files within your GPS unit. That’s squarely the market that HP pitches the iPaq RX5965 at; it’s even described as a “travel companion” on the base of the unit.

As a travel companion, it’s particularly richly featured, with GPS software provided by TomTom (using the same Sensis map data as everyone else) and the same SiRFStar III chipset as its competitors. Beyond that, however, it features a whopping 2GB of internal flash memory storage, which can be used for anything from word documents to personal audio. We doubt it’s going to replace the iPod as the personal music player of choice, but it’s great to easily be able to carry several albums, some work documents and even small video files around with your GPS, all witout having to carry anything extra. It’s also equipped with WiFi and Bluetooth, making it possible to synchronise your phone and surf the web from plenty of commercial locations (and many free ones) once you’ve completed your trip.

We’ll make no secret of the fact that we love TomTom’s intuitive approach to GPS mapping and location, and within the iPaq RX5965 it works just as well as within a dedicated TomTom unit such as the Go910 or ONE. We did hit one catch with the iPaq RX5965’s GPS performance that it shares in common with the Mio P350 GPS/PDA hybrid – because the iPaq RX5965 launches TomTom as just another application, it can be a bit slow to get that initial GPS lock, and if you’re forgetful, it’s too easy to minimise the application rather than quitting it, at which point the GPS will keep on draining battery power at no benefit to you.

At first glance, $899 for a GPS/PDA hybrid seems exceptionally on the rich side, especially given that half the price can score you the Mio P350 which uses the same hybrid model. We reckon that the extra speed, easy TomTom software and globs of storage space that HP throws into the iPaq RX5965’s attractive casing makes it a worthwhile price to pay regardless.