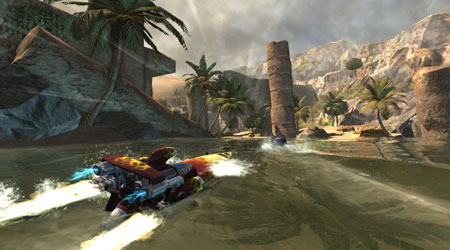 Exclusive to Xbox Live Arcade, Hydro Thunder Hurricane is a perfect poster-boy for the service, despite not quite being the ‘full-featured sequel’ its developers claim. ‘Inspired’ by the utterly brilliant arcade game ‘Hydro Thunder’ by Midway, there’s a lot of familiar ground here for people who played the game the first time around. The developer, Vector Unit, has boosted the offering with eight players online (to complement the four-player split screen play in your lounge room) and a couple of extra game modes, largely tests of skill, but the ‘meat’ of the game is substantially the same, seeing the same boat designs and eerily familiar course design that borrows much from before. However, there’s online multiplayer, unlockable boat liveries and Xbox Live Avatar items to collect along the way.
The new Hydro Thunder looks a lot prettier and, more crucially for a water-based racing game, implements water dynamics that actually affects your boat’s performance. This, in turn, makes you more carefully consider which speedboat you take out: rather than just go for the most recently unlocked, or the one with the paint job you like best, it’s worth recalling the race course itself and choose accordingly – the slimline Tidal Blade, which cuts through the contained waves in the Tsunami Bowl (Hydro Speedway), for instance, makes it a much better choice than the nominally faster Banshee for making tighter turns and dealing with the wave machine’s antics.
The original Hydro Thunder game delivered its thrills mainly through the excellent shortcuts and the exhilarating jumps – or, rather, ‘falls’, as you find yourself hurtling over the edge of a rock formation and then falling, falling, falling before you hit the water again with an almighty splash and rocket away under boost. Finding and using the shortcuts is key to securing a podium position in each race here too and makes for a lot of fun as you use the first couple of run throughs to scout their locations and then go again, boosting and jumping your way through them to hit first place.
It may have been over 10 years since the arcade, Dreamcast and N64 versions of the game wowed us all, but the graphical makeover and faithful recreation of the dynamic levels makes the racing feel fresh. And for only 1200 points – just under 20 bucks – Hydro Thunder Hurricane is the best thing you can do with a John Flynn this month.

Max Everingham is the owner of Game State, a B2B videogame software analysis & marketing consultancy. Max is a videogames veteran, having worked in the industry since 1996, including senior brand & product marketing positions at EA and Codemasters.
Overall
Performance
Design
Reader Rating0 Votes
2.7