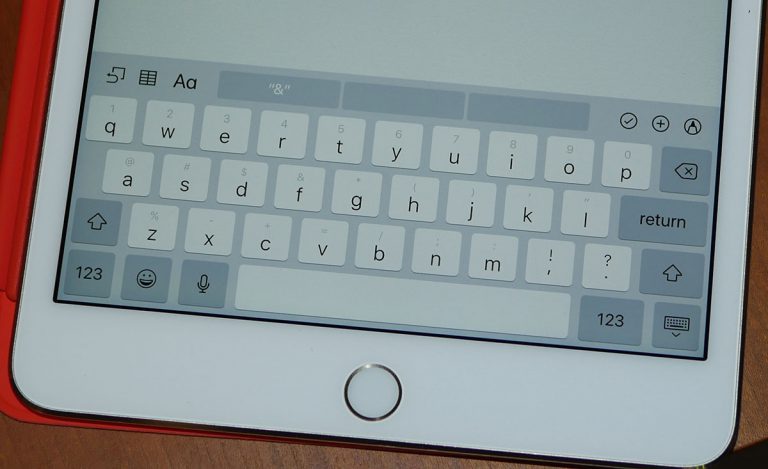 When Apple releases a new version of iOS, the iPhone, iPod Touch and iPad operating system, it tends to highlight such features as new, improved emoji, and greater support for things like virtual reality. But for those who use their iDevice as a productivity tool, one of the best things to roll out with iOS 11 has been a keyboard enhancement.

It’s only a little thing, but the addition of the finger slide feature makes the iOS 11 keyboard far more efficient. Apple calls it the QuickType keyboard.

What is this? On each letter of the standard QWERTY “soft” keyboard on the iPad there is now a light grey secondary character shown above it. Above the top row are the ten numeric digits. Above the other letters are things like hash symbols (#), ampersands (&), asterisks (*) and such. Rather than having to press the number key – although that’s still there in case you want to do things the old way – you simply touch the relevant letter key and drag it down slightly. That exposes the secondary character. Lift your finger and that’s the character that goes into the app’s text box.

You don’t have to slide your finger far. And with the smallest amount of practice, it becomes a second-nature mini swipe with barely a break in your tapping speed.

Being an Apple product, the touch thing works smoothly and reliably, with good discrimination between the mini swipe for the second character and tapping for the main character.

And each time you want to enter a symbol or number, it turn three taps – Number Shift, Character, Alphabet shift – into one small slide.