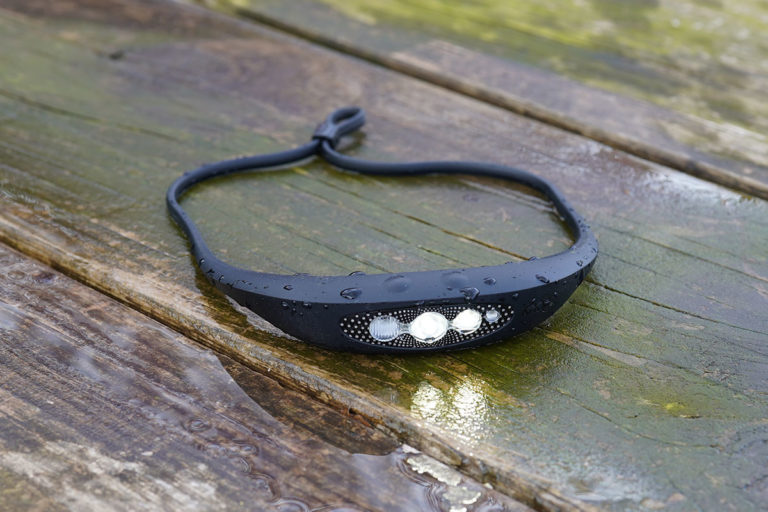 Late last year I had a lot of fun with the Bandicoot silicone headlamp from the Australian firm Knog. Now it has come out with the Knog Bilby. This is similar in theme but offers four times the brightness. Let’s check it out.

About the Knog Bilby

Like the Bandicoot, the Knog Bilby consists of a stretchy silicone band with a lighting module inserted into it. Medical grade silicone was chosen because it can withstand temperatures that would rapidly kill you, remains stretchy without perishing, and should be non-allergenic. The silicon band is available in “Black”, “Fluro Orange”, “Putty Grey” and “Violet Blue”.

The working insert looks a lot like that on the Bandicoot, with three white LED lamps across the face, four small ones under the lip, firing downwards, and final red one on the face. On top are two buttons, presenting as two bumps in the silicone band. The insert has a rechargeable battery and a USB plug on one end for charging.

On the Bandicoot, you yank the silicone from one arm, exposing this plug. For some reason – perhaps that join became loose over time? It didn’t for me – the Knog Bilby uses a different method. You simply stretch the silicone a little to pull the whole lighting module out of the headband, and then you can plug it in. The charge time is four hours. Press either button while the Knog Bilby is switched off and the four downwards firing lamps will flash a number of times to show the level of charge.

The whole thing is IP67 rated. The “6” means that it’s entirely dustproof, while the “7” means that you can immerse it in up to a metre of water for at least half an hour. It weighs, says, Knog, 90 grams. My scales say 86.9 grams. That’s around fifty percent more than the Bandicoot, presumably because the battery is heavier. Still, easily light enough to carry with you wherever you are.

It’s the lamps that really set the Knog Bilby apart from the Bandicoot. I’m going to be using one set of names here. Knog uses a couple of different names across the user manual and the website, and on the latter seems to confuse the Mid with the Wide in terms of output. The Wide lamp is definitely much brighter than the Mid lamp. Each press of the right button (all this from the wearer’s point of view) cycles through the different output modes, which by default are simply the different lamps. Each press of the left button cycles through four brightness levels for the current mode.

The centre lamp is called Spot. It shoots a fairly tight beam directly forwards at up to 200 lumens output, 25 lumens minimum (rated runtime: 14 and 105 hours respectively). To its left is the Wide lamp. This also runs from 25 lumens up to 200 lumens. It seems a little less intense because it spreads its brightness pattern more widely. I’m guessing it uses the same model of lamp as the spot because its runtime is also the same. A Fresnel lens is what changes the pattern.

To the right of the Spot is the Mid lamp. This runs from 7 to 48 lumens (98 hours to 22 hours). It is clearly lower in output, is fairly diffuse and aims somewhat downwards. It seems good for watching your footing as you’re walking through the scrub. Notice that the runtime at 7 lumens is shorter than that of the Spot at 25 lumens. Clearly this uses a different lamp.

It’s not all white

Those lamps are all white, but the next one you select is even further to the left and it’s the Red one. I gather that’s good for helping preserve your night vision. It is rated at only 7 lumens max and 2 lumens, 32 hours and 103 hours.

Finally, the bank of four downwards firing lights are called Reading. In total they put out between 2 and 10 lumens, and last between 17 and 75 hours. You can imagine their purpose.

As always with these things, you trade-off brightness against runtime. I have to say I’m impressed with the Spot and Wide lamps, though. They are the longest running at low output – a still very useful 25 lumens. And even at their bright 200 lumens level, either one’s 14-hours will get you all the way through a long winter’s night, with some left over.

Finally, there’s a “Tilt” mode. Hold down the right button and the output of the three main lamps is manipulated so that the brightest point seems to lower, until it ends up where the Mid lamp normally glows. That’s much lower in output of course. Hold the left button, and the process reverses.

Using Modemaker on the Knog Bilby

Knog’s Modemaker software has been updated to work with the Bilby. As with the Bandicoot, you can extensively customise the various modes on offer. Find Red useless? Just delete it. Want an emergency beacon? Delete the weaker of the Boost modes and replace it with the SOS mode, in which the spot continually flashes in groups of three. There are other flashing modes, some additional combinations and several goofy modes (Knight Rider v1 and v2, Let’s Party and so on).

My only complaint is that Knog ought to get the Windows version of Modemaker (it’s also available for macOS) properly certified. To get the installer to run, you have to click the “More Info” link and push through Window’s dire warnings.

There really isn’t much to say when it comes to actually using the Knog Bilby. It’s very simple. You just slip it over your head and adjust the position. The light falls naturally where you want it to. Use Wide for a broader area, and Spot for deeper penetration. The band remained firmly fixed on my head, yet I found it so comfortable I wouldn’t hesitate to wear it for many hours.

In the middle of the night, the brighter Boost mode lit up my whole backyard – maybe 350 square metres – remarkably well. The Wide mode turned out to cast its broader light pattern lower than Spot, so that it thoroughly lit up the ground in front of me out to ten or more metres.

The control buttons are widely-enough spread so that you can easily use them with gloves. They require a positive but not excessive press. And, as I’ve said, you can customise the Knog Bilby to pretty much whatever style of operation that you want.

And it’s not just for outdoors. I found the Knog Bilby very useful when climbing under and behind my equipment cabinets to connect cables, and to add a bit of additional light when photographing equipment.

What more, really, needs to be said. Well, only that the Australian-designed Knog Bilby headlamp does a superb job, is comfortable, easy to use and powerful.