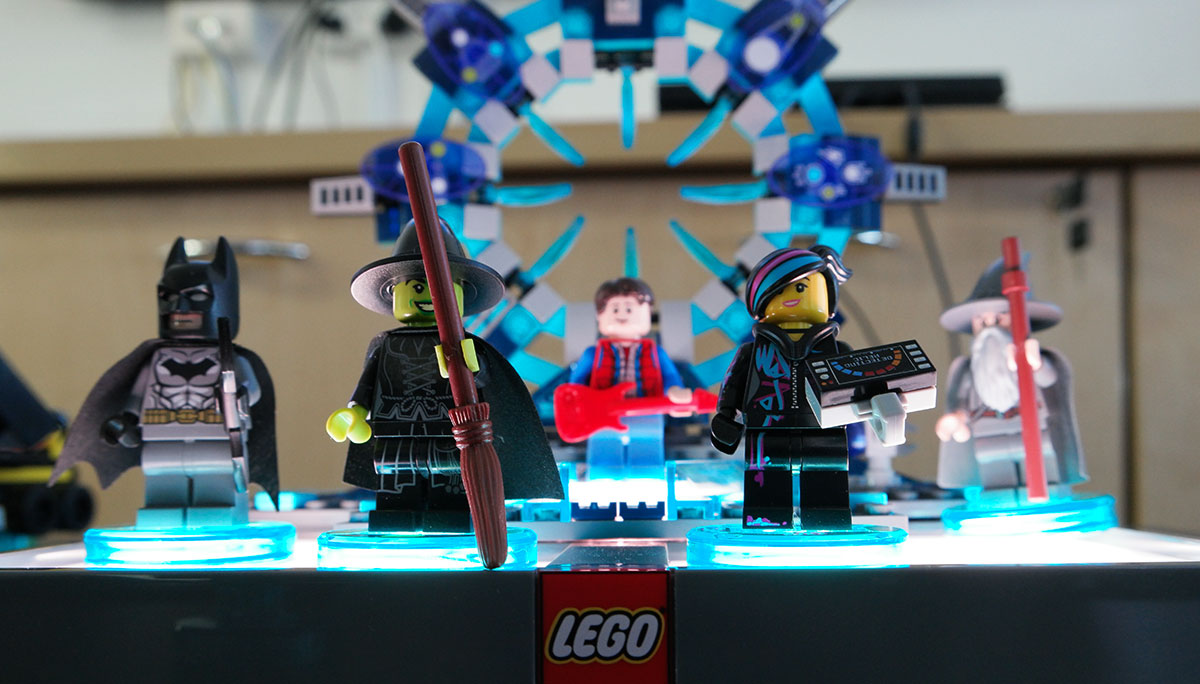 Lego Dimensions to make adults get out their toys once again

One of the best things about being a grown up has to be getting to do what you want, and buy what you want, but if you’ve ever been told to put away toys, a new game on the way is all about not doing exactly that.

You can call this writer immature, but there’s nothing quite like playing with Lego. Maybe it’s the creativity one can get from time with a blank canvas and an instruction to build and only build, but Lego is one of those toys anyone can go back to.

Adults don’t always go back to toys, but sometimes, it’s worth it to go back into the toy chest and see what we can dig up.

A new title from WB Games may have you doing exactly that, with “Lego Dimensions” climbing quickly to the top of the list of games we really want to own this year after spending a couple of hours with the game only recently.

More than just blocks in a box — which is what Lego kind of is — Dimensions is about making those “blocks in a box” semi-interactive, and combining the sharp storytelling seen in previous Lego games as well as “The Lego Movie” with a game that connects everywhere, from the world of Lego to other worlds you may remember fondly, like “The Wizard of Oz” and “Scooby Doo”.

While it may well be a video game, Lego Dimensions falls under a fairly recent style of toys called “toys to life” whereby figurines are used with specialised hardware to make them come to life. Granted, they won’t become robots, nor do they animate in front of your eyes; rather, “toys to life” is about taking a figurine, setting it on a digital board capable of reading the chip built into the toy, and allowing a video game to talk to the toy.

Activision was one of the first companies to try this with its “Skylanders” games, and Disney has joined a year or so ago with the “Infinity” series, which blends characters from Marvel, Star Wars, and Disney’s and Pixar’s own franchises, creating a game that has all the characters you and your kids are familiar with.

But there has always been a catch with these titles, and that’s the figurines you were asked to buy: they didn’t do a thing.

You may as well call them “statues” rather than “figurines”, because while an action figure has posable parts and kids (and a few adults) will wave them about and make voices and actions for them in their own imaginary world, “statues” are less likely to elicit that sort of response.

For both Disney Infinity and Skylanders, your figurines are essentially just game pieces that start up a character. Put “Lilo and Stitch”’s Stitch on the board alongside “Toy Story”’s Woody, and Disney Infinity will throw up the characters from each of those movies in this game, allowing you to play with them.

That’s all that will happen, however, and with no moving parts, no actual joints, arm movements, head tilts, and so on, your child is less likely to be playing with a toy.

Instead, you’re just buying characters for a game, like downloadable content or add-on packs represented by statues you’re allowed to own.

It’s a great way for toy manufacturers to make money, but it’s not exactly fun to play with.

Lego has a different take on how this should work, and Lego Dimensions is a game all about challenging perceptions, taking the fun and creative concept of Lego brick- and story-building — a toy that never gets old and can be something even adults continue to have fun with — and mixes it with a tongue-in-cheek video game with a story that not only feels like it has come straight from the Aussie-made “Lego Movie”, but also from other stories that many of us have grown up with.

What Lego Dimensions appears to be, then, is a game made for both adults and kids to enjoy together, rather than for each to grumble and groan painfully while one sits back and watches.

Take the pad that you have to use to play the game, for starters.

Every “toys to life” game relies on one of these, and they’re all a little different. You need the Skylanders one to play that game on a console, and you need a Disney Infinity one to play Disney’s titles.

Lego’s is no different for Dimensions, and it uses the same Near-Field Communication reading technology inside to pick up on tags built inside the base of toys, loading the characters in the game as and when you play with them and put them on the panel.

But Lego also lets you decorate the pad yourself, keeping Lego’s circular block-building pattern on the panel and letting you make it into whatever you want. You could bring some Lego from home — maybe build yourself a full-on Technics portal or attach a few extra characters — and provided you don’t impact the pad space for Dimensions characters, you will literally be making the Dimensions pad well and truly yours.

Then there are the characters themselves, and these are actual Lego mini-figs.

Everyone has seen a mini-fig in the past, and the ones being used in Lego Dimensions can actually be taken off their little game pads and used in other Lego adventures, with your own imagination at play.

For now, we’ll leave our little mini-figs on their respective game pad and use them with the Dimensions main pad, because this will let the game bring them in.

The game itself arrives with three characters for you to start with, delivering Batman, The Hobbit’s Gandalf, and The Lego Movie’s Wyldstyle, which will give one or two players a few characters to start the adventure with. They’ll explore a Lego world being taken over by a bad guy, and this Lego world will include a few movies and places you might already be familiar with, such as the world of Hill Valley from “Back to the Future”, Oz from “The Wizard of Oz”, Springfield from “The Simpsons”, and even a strange two-dimensional version of Valve’s “Portal” video game, with Lego-based versions of characters.

These are all example Lego worlds that will have Lego characters for you to buy, if you so choose, and while each major themed Lego pack will come with extra missions based on these franchises, you don’t need to buy them to play some of the story.

Rather, with each extra pack, you get extra characters and extra missions, and that word “extra” is key simply because the base game — the one with Batman, Gandalf, and Wyldstyle — will arrive with hours of gameplay and a mission from each story already in the box, providing a demo world to play with.

Now if you go and buy a few other characters — maybe you want Homer Simpson or Marty McFly — you’ll find these can play along in the game levels as well as the originals, but purchase of these characters will unlock extra levels, too; essentially, purchase of these characters are just like the other “toys to life” games, with these activating downloadable content, except this extra stuff is already built into the game, with characters, levels, and voices just waiting to be unlocked.

But you don’t have to, and since the game and its base station starts at a good $170 with the packs ranging from $30 for just the characters to $60 for the characters and levels, Lego, developer TT Games, and its publisher WB Games have all come together to basically offer a middle ground starting area with both mission-based levels and neato open world sandbox versions, so you can explore each area until your heart is content (though some parts of the sandbox may only open up to extra characters later on).