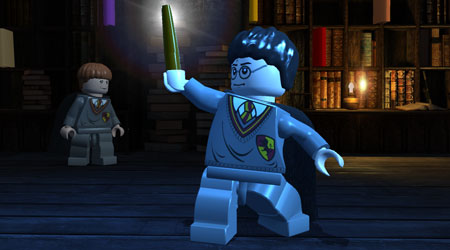 If you have kids, and like playing videogames with them, stop reading this right now and go out and buy LEGO Harry Potter: Years 1-4. Wait! Unless they’re under 10 and, oh bugger, you’ve gone already! Never mind, it’s only a minor caveat and we’ll deal with that later.

LEGO Harry Potter: Years 1-4 is the latest hot intellectual property to receive the LEGO treatment, courtesy of Warner Bros and developer Traveller’s Tales. It’s available on every conceivable games machine (we played it on an Xbox 360), out now, and is so well executed, with a few really well thought-out ‘tweaks’ to the successful LEGO game formula, that you can’t help but enjoy it. As the name suggests, you get to live out Harry’s exciting life from the books and movies Harry Potter and the Philosopher’s Stone, Harry Potter and the Chamber of Secrets, Harry Potter and the Prisoner of Azkaban, and Harry Potter and the Goblet of Fire. So there’s loads of content, and gamers can play as Harry, Ron and Hermione, as well as hundreds other ‘bit players’ from the Harry Potter films, pretty much ensuring that the kids can be who they want to be.

One of the best innovations for this game is the treatment of co-op play. In previous LEGO games, you could play with a friend but were ‘tethered’ together, meaning that if one of you decided to go explore the outer edges of the screen, your partner would be stopped in their tracks and pulled back over towards you. This could lead to all manner of frustrating moments, rendering one player ‘blind’, unable to see part of the environment, or forcing them accidentally off a cliff, into a vat of boiling goo or some other calamity. But in LEGO Harry Potter: Years 1-4, the screen now instantly ‘splits’ into two as the distance between you becomes too great, allowing each player to go their own way, then recombines as you approach each other again. It takes a moment to get used to this new system but, overall, is a great improvement.

LEGO Harry Potter is certainly one of the most accomplished, and complex, LEGO videogames made, and really therein lies the only real criticism. For younger players – and possibly older ones, at the other end of the age scale where billions of things happening at once can lead to confusion – there’s a quite bewildering amount of stuff going on. Like previous LEGO outings, players can build things, bust things and collect coins, but in the Harry Potter version you also have to wield your magic wand, switching between the various invocations that you collect to ensure you use the correct spell on the correct item. This adds a layer of complexity to the game that other, simpler fare like the utterly brilliant LEGO Star Wars, did not have, potentially rendering it too tricky for less experienced players. There’s just so much to remember – on account of the developers giving you SO much to do – that you often find yourself waddling past all sorts of objects that, only later, does it occur to you that you could, or even should, manipulate in some way or other.

You can have too much of a good thing and LEGO Harry Potter: Years 1-4 very nearly is too much. But it’s also important to note that you don’t have to collect, build, dig up, transform, destroy, liberate or cast spells on absolutely everything to enjoy the game. The game is funny, great in co-op and dream fare for families.