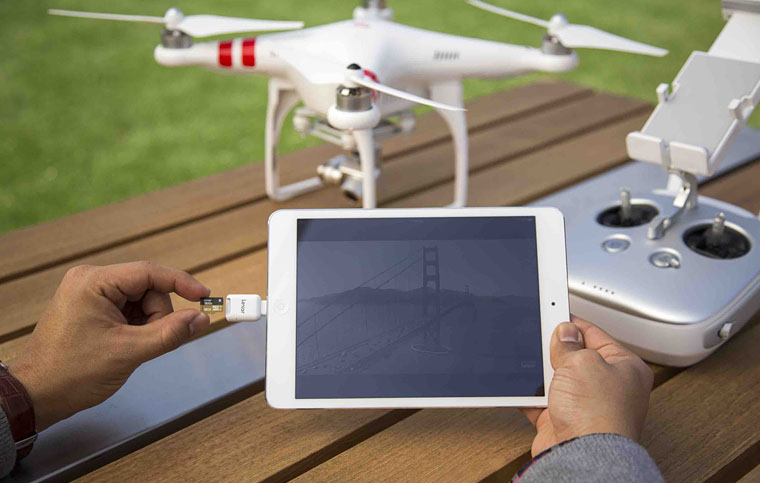 So you’re out and about with your action camera, maybe even video-camera drone, and you’ve captured what you’re hoping will be great footage. But it’s a bit hard to tell from the small, low resolution screen on the camera. Wouldn’t it be nice if you could load the video onto your iPad, or even iPhone, for a better view?

Lexar, well known for its flash memory products, including USB memory sticks and memory cards across all formats, has released a microSD card reader for iOS devices. Take the microSD card out of the video camera and stick it in the Lexar microSD Reader, and then attach that to the Lightning port at the base of your tablet or phone, and you can load the video and photos right in for viewing on a better screen, or for backup, or for editing and then sharing via the Internet.

Micron (the owner of Lexar) Consumer Products Group Marketing Manager APAC Mathew Luu says, “Users who are looking to capture more content in real time while on the move can find it challenging to manage that content, especially in an iOS device. Shooters can now take advantage of the large screens and connectivity of their iOS devices by editing and uploading content captured on their action, sports and aerial cameras wirelessly. Users no longer need to wait until they’re back in front of their main computer at home or in the office to upload content captured on-the-go.”

The Lexar microSD Reader is compact and easy to carry, and is designed so that it will attach to most devices even with their cases in place.

Just as important is software. iOS devices may upload content from attached memory with some devices, but Lexar has provided a free app at the App store that manages the process more precisely, and allows other content to be downloaded from the iOS device to an SD card in the microSD card reader. The app only works with Lexar devices.

The Lexar microSD Reader is available from leading retailers for a recommended retail price of $54.95.