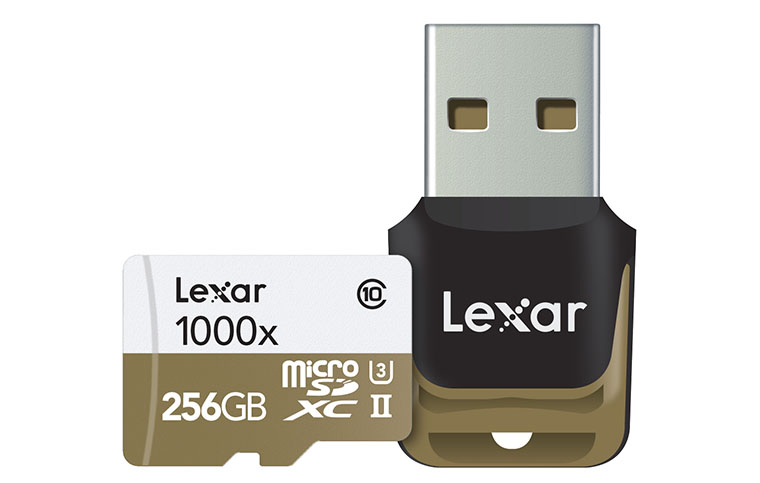 When writing about phones, I keep using formulations like “it supports microSD cards of up to 256GB, if and when they become available”. There have been some high capacity, ultra-expensive curiosities around, but now Lexar has released a high speed 256GB microSD card that’s suitable for the main use of such a high capacity card: UltraHD video.

The new card has been through GoPro’s “Works with GoPro” verification, so you know it’ll work. It’s part of Lexar’s “Professional” card range and is tagged “Lexar 1000x microSDXC UHS-II (U3) memory card”.

microSDXC is the variant of microSD that supports capacities above 32GB, up to two terabytes (“if and when they become available”!) “1000x” means a thousand times the piddling speed of the original 1x CD-ROM reader. UHS-II is the new advanced bus – UHS stands for Ultra High Speed – with eight extra contacts to allow much faster transfer speeds. They are placed in such a way that the card will still work with older interfaces, just at more normal speeds.

An Ultra High Speed Interface does not necessarily guarantee that that the memory in the card can be read from or written to at commensurately high speeds, but the U3 rating says that it does. That’s the UHS Speed Class which requires a minimum sequential writing speed of at least 30 megabytes per second, needed for recording 4K video files at up to 120 frames per second. A conforming card should support very high bitrate encoding to at least 200 megabits per second.

As basically the fastest, biggest (in terms of capacity) thing around, the Lexar 1000x microSDXC UHS-II (U3) memory card is far from cheap. When released some time this quarter, it’ll sell for $449.95 in Australia. It comes with a compact USB 3.0 reader for UHS-II cards to allow fast transfers of your massive videos. The card is available at lower prices in 128GB, 64GB and 32GB capacities.