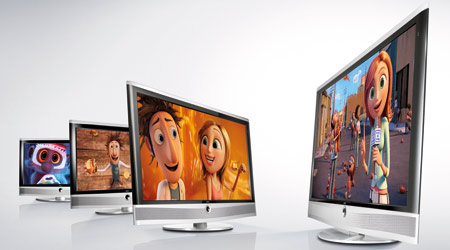 German TV and electronics manufacturer Loewe has had a small but significant place in the Australian market for many years, primarily with its amazingly high quality TVs. Back before panel TVs became the norm, Loewe consistently demonstrated that it was possible to have a beautiful smooth picture from regular analog TV broadcasts, and even more so with DVD.

But the glass tube is dead, and all is now LCD or plasma. The Loewe Art 42 SL DR+ TV uses LCD technology in full high definition resolution and an unusually attractive styling.

But we’ve also drawn in a couple of electronic devices from Loewe as well: a Blu-ray player and an unusual combination of DVD player, digital media player and FM radio.

First, back to the TV. As the name implies, this is a 106cm (42 inch) model and it of course offers a full high definition display. The TV has a dynamic backlight that allows it to darken overall during night scenes.

This is placed in an unusual enclosure, with a black border immediately around the picture, with a largish white panel at the bottom (holding eight small loudspeakers to produce its sound) and a white trim at the top.

The most unusual aspect of this TV is that it is also a PVR, with a 250GB hard disk. Also unusual, but quite useful in some circumstances, is the ‘centre channel’ input. This allows you to use the TV’s own speakers as the centre channel in a home theatre system.

To feed it signals, we looked at the BluTechVision Interactive Blu-ray player. Despite the name, this is a regular Blu-ray player, offering full BonusView and BD-Live capabilities. And instead of having to add some USB memory to support those features, it has 1GB of ‘persistent’ storage (ie. computer memory that retains its contents) built in.

The Audiovision is a CD and DVD player with an FM radio tuner, and it also supports USB (it has two sockets) and an iPod using the included connecting cable. It is a source device only: you need a TV display, an amplifier and speakers. Or you can use it with other Loewe equipment, including a subwoofer, which makes full use of a special proprietary output socket to deliver full surround sound.

Let’s take them in turn. The TV offers a reasonably good screen, backed by pretty amazing video processing. The colour was excellent, and in a normally lit room the black levels were adequate. In a darkened room, its limitations became apparent. Even though the backlight could automatically turn down in response to dark scenes, it was not an LED system which could be adjusted differently for different parts of the screen.

Still, there was no ‘pumping’ effect and black levels were moderately good.

The processing included Loewe’s longstanding ‘DMM’ mode, which is a motion smoothing system that generates intermediate frames between the real ones, thereby eliminating picture judder sometimes inherent in both DVDs and Blu-ray discs.

This is not an uncommon feature these days, except that Loewe does it spectacularly well. I suspect it uses Philips technology for this (sadly, Philips no longer sells TVs here), but even on really complicated full high definition Blu-ray scenes, the motion smoothing maintains its operation. On these same scenes, those from most of its competitors find it all too hard and just give up, going back to motion judder.

So Loewe’s system is actually worth using, since it produces very few artefacts and provides more information for the eyes about what’s happening in the picture.

The other processing was of a similarly high standard, if not quite as much of a standout against the competition.

This is one really nice TV.

The PVR function – which can be programmed manually, programmed via the EPG, or invoked on the spur of the moment – worked smoothly as well. It was assisted by the fact that this is a twin tuner TV. You can record one station while watching another, or watch two at once with the PIP function. But you can’t record two stations at the same time.

In general the Audiovision unit was fairly good at what it did. Having an iPod cable in the box was a nice inclusion and this and the USB playback worked as well as any consumer electronics devices do with these new media. In fact, scrolling through long menu lists (the unit presents your iPod’s content list, for example, on a connected TV) was faster than most. The FM radio worked all right as well.

But the DVD player section was simply not very good at all, which was quite surprising given Loewe’s experience. When the HDMI output is used – normally the best way to get great picture quality – the output resolutions available are 576p, 720p, 1080i or 1080p. Each of these requires the player to do a progressive scan conversion from the interlaced format of the DVD. This is where the player falls down.

It seems to rely entirely on certain information – a ‘flag’ as to the format of the video – encoded into the disc, but with more than 90 percent of Australian DVDs, this information is wrong. So the player uses the wrong processes and generated some nasty artefacts. These included jaggies, moire patterns and flickering horizontal lines.

The Blu-ray player clearly comes from an entirely different lineage because when playing Australian DVDs it ignores that information and instead examines the video content, and tries to determine from that how to perform the progressive scan conversion. It does this correctly most of the time, to a level better than most other Blu-ray players.

In operation, this is a dream player. It is fast. It starts quickly from standby. It loads discs very rapidly: typically in one-third to one-half the time taken by some of the slower current model players. It responds rapidly to the remote control.

It can even decode all Blu-ray audio standards – including Dolby TrueHD and DTS-HD Master Audio – to multichannel PCM should you need it to.

There are only two real problems with it. The player appears to be based on the same platform as used in current LG players. That’s not a bad thing, because they are also fast. This player measured almost identically in speed and other performance characteristics.

What is less impressive is that this Blu-ray player costs three times as much, and sheds some of LG’s more interesting functionality (WiFi support, YouTube and network media access).

What you get, though, is tighter integration into Loewe’s scheme of electronics, with the ability of the remote from any these three units capable of controlling any of the other devices. Indeed, aside from labelling the remotes for the Blu-ray player and the multi-source player seem to be identical. The TV one is also identical, except that it is better built, with a brushed aluminium case rather than plastic, and even nice rubber rests at the back to assist it to be gently laid down.

The downside of these is that some of the functions are rather difficult to discern from the labels on the remotes, and some transport controls are relegated to shared-function keys. So, to skip a chapter you press the fast forward key briefly. To actually fast forward, you hold the same key down for several seconds.

The Loewe Art 42 SL DR+ TV is a dream machine. It is a genuinely great TV with PVR functionality. The other units could work well if you have this TV, primarily through the remote control convenience. Just remember to play DVDs in the Blu-ray player, not in the Audiovision.