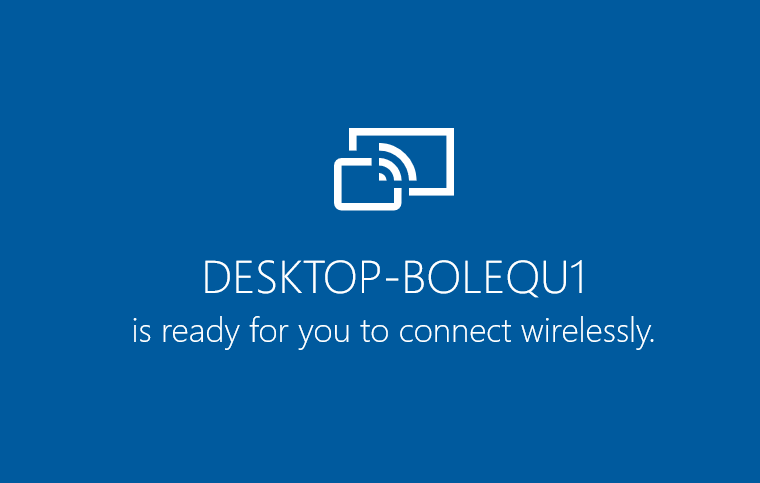 I’m going to make no promises. Miracast may or may not work. In my office, some devices work with others. Other devices don’t, and there seems to be no discernible pattern as to why. But if you like the idea of mirroring your portable device’s screen to a larger display, with Windows 10 your computer can now become that larger display.

By Windows 10, I mean version 1607, or the Anniversary Version, now presently rolling out to Windows 10 computers around the world. This comes with an app called Connect. Start that app and the computer becomes discoverable to portable devices capable of sharing their screens with other devices, typically using Miracast.

At this point I should pause to make it clear that we’re talking about wireless connectivity between Windows and Android devices. For iOS and Macs, things are different and typically require an Apple TV to use with Airplay.

For some years Android and some Windows devices have been able to mirror their screens wirelessly to some smart TVs and other consumer devices (eg. some network Blu-ray players) attached to the same network. The schemes used have been Miracast (Android) and WiDi (Windows). When Miracast appeared, WiDi was extended to include support for Miracast. What both in effect do is connect a portable device with a larger display as though with a HDMI cable, but wirelessly.

This has been useful for doing such things as showing photos on a smartphone to a larger group of people, or displaying business presentations, using a large TV. In addition, with Windows computers, once a connection was established, the smart TV could be changed from simply mirroring the computer screen to becoming a second screen. So, all very convenient.

As I’ve indicated, this has sometimes been an iffy proposition. Over time, it does seem to have been getting more reliable.

With Android 6.0 Google has dropped support for Miracast, leaving it to phone vendors to provide it themselves. On Samsung devices it’s available on the swipe down menu as ‘Quick connect’. As for WiDi, on Windows 10 computers it’s available under the ‘Connect’ box at the bottom of the notification bar. Fire up either of these and a list of available displays will be presented.

The new thing with the new Windows 10 is the ‘Connect’ app. This differs from the Connect box, in that it receives screen data instead of sending it. It creates a window to which other devices can mirror their screens.

Is this useful? If you want to see photos on a larger screen and you don’t have a smart TV, then indeed it would be. I expect that people will find other valuable uses for themselves. There are reports that for people with a Windows phone, Connect can go further and allow the phone to be controlled by the connected computer. I don’t have a Windows phone.

It turned out to be easy and fairly reliable. As with a number of devices in my office, the first attempt to connect usually failed. But the second attempt worked fine. To use it, you first run the Connect app on your Windows 10 computer. This will present a window, waiting for connection.

I’ll use my Samsung Galaxy S6 phone as the example source device. Pull down from the top of the display and choose ‘Quick Connect’ at the bottom of the main control bar. (Quick Connect integrates all the media connection options, including Miracast and Bluetooth, into one control panel.) This presents the connection screen, which will list other devices to which you’ve previously connected.

Touch the ‘Connect to and use nearby devices’ to search for new devices to which you can connect. Your computer (which has Connect running) should appear on the list. Touch its name. You may get a couple of options appearing under it. Choose the one that says ‘mirror screen’:

A pop up will show you that the connection is in progress:

The computer will also tell you that it’s establishing a connection. And soon enough (if it works at all: no promises, remember!) what’s appearing on your phone will also appear on the computer screen:

Pick a photo from your phone’s gallery and up it will pop on the computer display:

It doesn’t have to be an Android phone sending the screen. Here is the screen of my Microsoft Surface Pro 4 mirrored to a Windows Desktop computer. But I guess that might be a solution to a problem which doesn’t exist….