Nissan LEAF – On the Road 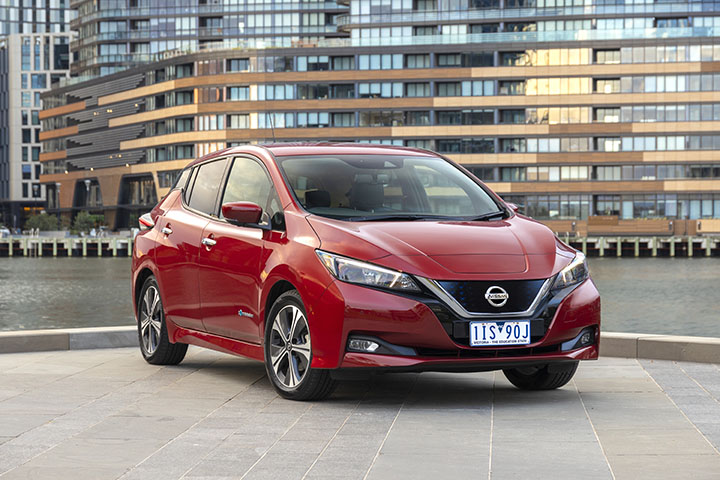 Wednesday 10 May 2019, Melbourne Airport – I arrived a little late, thanks to high winds closing down most of the runways at Tullamarine. But even so, as I stepped out into the Qantas Valet Parking area, there was still a row of four shiny new Nissan LEAF electric cars, one of which I’d soon be driving.

I wrote about the relaunch of the Nissan LEAF electric vehicle back in October last year. Back then a lot still remained unknown, including the selling price. I estimated that the price would be more than $51,000. Wrong. It’s $49,990.

Of course, you’re paying a lot more for a Nissan LEAF than you would for an otherwise equivalent petrol-powered vehicle. But there are two things which may offset that. First, fuel is cheap. On running assumptions that would cost you $1,800 per year in petrol, a Nissan LEAF will cost you less than $800 per year in electricity … if you charge it up at home at peak electricity rates. At off-peak, that can halve. And if your home is solar, then it might be entirely free.

And that’s not counting the fascinating trend of supermarkets and shopping malls installing free charging points in their parking lots.

The other offset is to do with a forthcoming feature of the Nissan LEAF: bi-directional charging. That is, the battery in the Nissan LEAF can supply its power back into a suitably equipped grid. Or it will be able to do so some time this year. Some overseas models of the Nissan LEAF can already do that. The feature will be enabled in the Australian models as soon as the regulatory hurdles are cleared.

It’s unclear what additional expenses might be required in the home to enable this ability, but the potential is enormous. If your Nissan LEAF tends to stay at home in the daytime, it can charge from free solar during the day and provide power to your home at night. Or it can charge up on cheap off-peak power at night and power your home during the expensive peak-price times.

Am I focusing too much on this aspect of the Nissan LEAF? Perhaps, but I’d note that was a strong focus of the launch event.

I drove about fifty kilometres through Melbourne, part on the expressways, part on back streets. Naturally, I adhered to all road rules, so the maximum speed I achieved was 100km/h. As usual with these sorts of events, there was little time to familiarise myself with the secondary features of the vehicle. Especially how to turn those features on and off.

So, for example, I had to endure the warning vibration in the steering wheel when the car judged that I’d approached too closely to the edge of my lane. (That’s my driving style, but the car did not approve.) The Nissan LEAF is full of those assists, including pedestrian detection and emergency braking.

I’m being crotchety here. In fact, the Nissan LEAF has just about all the mod cons that one would hope for in 2019. That includes two displays. An 8-inch one on the centre console is for managing GPS and car appointments such as stereo. The car of course supports both Android Auto and Apple CarPlay. In front of the driver is a speedometer to the right and another display to the left. This can show things like energy flow, driving range and battery level and so forth. It also shows the current speed limit.

The thing that I still think of as ignition, but is really an on/off switch, is a simple push button. The parking brake is a lever on the floor near the left foot. Surprisingly, the steering column stalks are Euro-style, with the indicators on the left. The steering was light but sure and nicely direct.

I found the suspension to be firm, but not uncomfortable. I took a wrong turn at one point and ended up on a suburban road that looked like the surface of the moon, craters punctuated by other craters. The suspension absorbed most of it, without hiding how appalling the surface was.

But the Nissan LEAF is, of course, all about the electric motor. With a full charge the battery is rated at a range of 270 kilometres. Acceleration is rated at 0 to 100km/h in 7.9 seconds and top speed at 144km/h.  The motor produces 320Nm of torque all the way from zero rpm to 3,283. Above that Nissan doesn’t quote the torque and instead specifies the power output from 3,283rpm to 9,795rpm at 110kW.

The 7.9 second acceleration gives the car modestly sportscar-like performance, making it very zippy. But it’s zippy in a slightly different way to a petrol car, principally because its smooth. It pushes hard with no fuss, no roar of a motor, and no gear changes. The acceleration doesn’t feel as hard as it would in a petrol car performing exactly the same way.

But, then, I doubt a petrol car would perform exactly the same way, given the relatively truncated torque curve of a petrol car. The Nissan LEAF just maintains a steady impetus.

That’s both at slow and highway speeds. I slowed a little on an expressway to make space in front of me, then stabbed the “gas” pedal. The car accelerated very firmly and quickly from 70 to 100km/h. I had no sense that acceleration was fading near 100, such I expect that overtaking would not have been a problem.

Of course, the car employs regenerative braking. When slowing, the motor takes the kinetic energy of the car’s forward movement and turns it into electrical energy, which it pushes back into the battery. But you don’t need to hit the brake pedal to do that, thanks to the e-Pedal. Nissan touts this as allowing “one pedal driving”.

You push down on the accelerator and the car accelerates. You back off on the accelerator, and the car brakes. It can brake reasonably firmly in this mode, all the way down to a stop if you wish. You still have the brake pedal which you can apply should you need to stop more quickly still. And the car has four-wheel disc brakes in case the regenerative braking is insufficient. It also has anti-lock braking and electronically controlled distribution of the braking force.

“Throttle” control is the most unusual, occasionally disconcerting, thing about driving the Nissan LEAF. My instincts for the effect of engine braking were completely off, so I far too often came to a near halt too short of my goal.

You can switch off “e-Pedal” – there’s a prominent switch for that. But that doesn’t make it more like a petrol car because it means no engine braking at all. That’s equally disconcerting.

But, of course, it’s really just a matter of getting used to different things. Already by the end of my driving time my instincts were starting to adjust to the level of braking applied by the e-Pedal. And I came to appreciate some of the little things it offers, like the how it holds your position when you’re stopped at traffic lights without you having to do anything.

The new Nissan LEAF is fine car with very good performance and is wonderfully cheap to run. It comes with connections to charge at home as well as at proper CHAdeMO points. It looks good and is comfortable.

And, it seems, you’ll soon be able to use it to power your home.