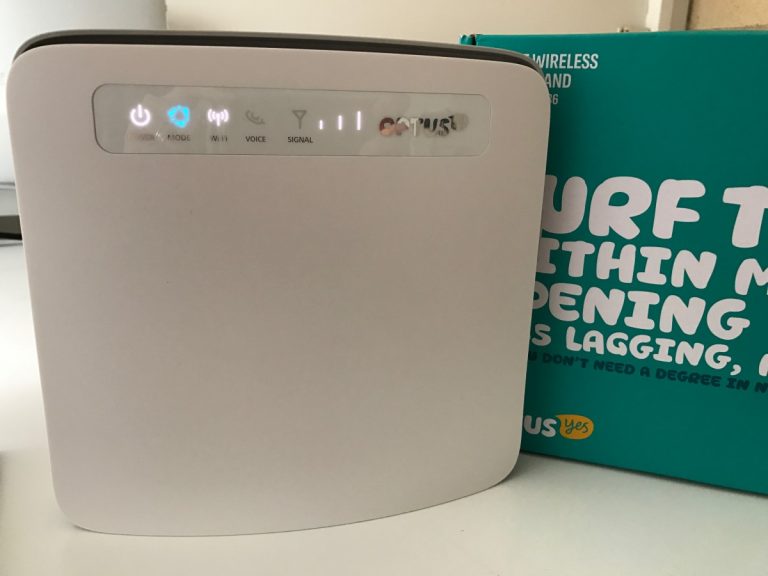 I was up and running in less than 5 minutes and don’t have a degree in nanotechnology, so I can confirm that Optus’s claims. You simply open the box, get the bits out and plug in the router. Once powered on, the router hunts down the mobile network and confirms its connection with a blue light on the display panel. From there, it’s up to you to either simply plug in an Ethernet cable from your computer or device, or otherwise, you can hook up via the Wi-Fi.

Optus’s Home Wireless Broadband is indented for people who want to connect to the Internet from home without having to deal with the delays and challenges of installing a more ‘permanent’ connection like NBN, Cable or ADSL. It’s good for renters, students or share houses where you want a private connection, and the ability to pack up and take it with you if you choose to live somewhere else.

There’s the Optus-badged Huawei E5186 router, which is compact and slim, and intended to stand up rather than lie flat. It supports Wi-Fi 802.11b/g/n/ac varieties on 2.4GHz and 5GHz bands, and can connect 64 devices simultaneously, so no need to worry here.

There are four Ethernet ports on the back of the router for cable network connections but the two telephone jacks don’t do anything on this model.

Located next to the power plug is a USB socket, which will share a hard drive or printer to all the devices connected to the network. It’s not USB 3 but rather the slower USB 2 kind, although this won’t have much of an impact on sharing files over the network.

Otherwise, a SIM card socket can be found on the router’s edge, along with a Wi-Fi on-off switch, WDS network and reset buttons.

If your so inclined, the router’s configuration page lets you tweak a variety of network and admin settings including remote management, auto-updating, a hardware firewall, QoS (Quality of Service) and many others.

Optus’s Home Wireless Broadband plan offers 200 gigabytes per month, with an extra 10 gigabytes costing $10 if you go over. You can automatically top-up 5 times to a total of 250 gigabytes before your connection is speed limited to a snail-like 256 kilobytes per second. Optus charges $80 per month on a 24-month plan, or $90 per month on a 12 month plan. There’s free next-business-day delivery too if you live in a major metro area.

While Optus’s Home Wireless Broadband connects to the internet via its 2300MHz (4G) network, it’s important to point out that you’re not going to get 4G speeds. In fact, you’re getting more like ADSL speeds.

We tested ours in the Gadget Group office in Woolloomooloo, NSW, which is about a 10-minute walk to Sydney’s CBD. Our speed tests showed a maximum download speed of around 12 megabits per second (Mbps), with a max upload of 1Mbps. This is pretty much what you’d get with most ADSL connections, give or take those that are located close to a telephone exchange.

If you’re outside of Optus’s 4G network area, then your connection speed will more likely be 5Mbps down, and 1Mbps up.

It’s important to note that 12Mbps isn’t really optimal for video streaming. While you can do it, if you plan to have multiple devices connected to the internet around your home at the same time, the quality of your videos will suffer. This would be even more pronounced if you’re running at a 5Mbps download speed.

While you don’t get them in the box, you can purchase two 4G antennas to boost your reception, and potentially increases your Internet connection speed.

Overall, Optus offers a reasonably priced way to connect your home to the Internet, including all its devices, without needing to put roots down. On one hand, it’s frustrating that Optus’s otherwise super-fast 4G network is hobbled down to 12Mbps speeds, you do get a healthy 200 gigabytes of data per month, and this would be an unheard of price if it were a full speed 4G connection. So if you’re OK with ADSL-like speeds, and the added benefit of being able to take it with you to your next home, Optus’s Home Wireless Broadband may be just right.

Overall
Features
Value for money
Performance
Ease of Use
Reader Rating0 Votes
Super quick to set up, take it with you to your next home
Limited to 12Mbps (or less) download speeds
4