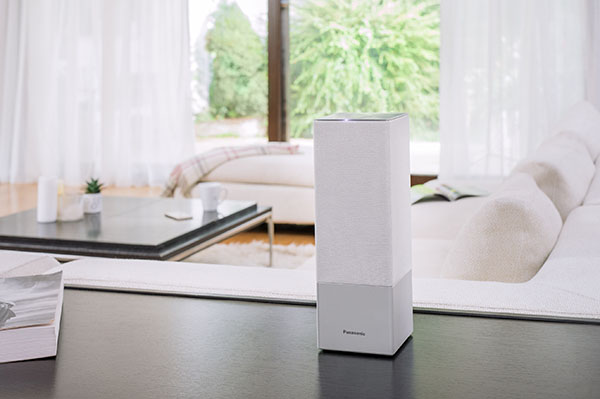 Why should computer companies have all the fun with smart speakers? The Panasonic SC-GA10 brings Panasonic’s audio experience into play in an OK Google smart speaker.

The Panasonic SC-GA10 combines Google Home functionality into a compact Panasonic network speaker. Reasonably compact. Looking from the top, it’s a 100mm by 100mm square, and it stands 284mm tall.

The bottom quarter has a brushed dark aluminium finish, with cloth over the rest. There’s also a white coloured version. The top has a set of touch controls. A row of LEDs on the leading edge indicates input, volume and so on.

As with other Google Home devices, you can tap one of the controls on top to switch off the unit’s microphones to ensure it won’t listen to you. In practice, you’ll probably forget so you’re in Google’s hands when it comes to any secrets you might inadvertently share.

Inside are two 20mm dome tweeters and an 80mm dual coil woofer. There is 40-watts of total power (1kHz, a huge 10% total harmonic distortion). It has a large power adaptor that would look at home with a notebook computer. It has a 3.5mm auxiliary input next to the power input so you can plug in old-school audio devices.

There’s also Bluetooth. The SC-GA10 supports the AAC codec for higher sound quality with Apple devices. But the main use is via network connectivity. In short, you can send Internet music to the speaker. Supported are Spotify, Deezer and TuneIn.

You can also send local music from your phone and network resources. It will play MP3, AAC (iTunes style), and regular and high-resolution FLAC, WAV, AIFF and ALAC formats. That covers nearly everything.

At the moment the speaker is standalone, although it can form part of a group under Google Home’s management. Panasonic says that a future firmware update will allow two of the SC-GA10 speakers to go stereo.

So, how hard was this speaker to set up? There’s not much to the connections: power and an auxiliary input. That means no Ethernet.

I plugged it in. After a few seconds, the speaker announced in the familiar female voice that it is my Google Assistant. She suggested I download the Google Home app. Which I’ve long since done, of course.

I fired up the app, and there was the Panasonic SC-GA10 speaker, shown right on the front page. The app said it was ready for setup. There were twenty or so seconds of bouncing geometric shapes on the screen, and then a tone sounded as the app asked if I’d heard it.

Then a few more steps. Did I want “Voice Match”? Remember, this is all Google Assistant stuff. That allows personalised answers for different people. My address (for weather and traffic information –  auto-filled anyway)? Select your default Chromecast speaker – if you have more than one.

Then it was all done. But was it? The next page said: “All set!” but added “Your Panasonic GA10 has been set up but can’t be found. Make sure that your phone and Panasonic GA10 are on the same Wi-Fi network.”

Ugghhh! I decided to ignore that for the moment. Back at the Google Homepage, it suggested I get the Panasonic Music Control app. So I did.

Google Home identified it as a linked device but not as a speaker.

Then I tried speaking to the speaker – “Okay Google, what’s the temperature today?” – and it worked. I fired up one of my music playing apps. There was the Panasonic GA10 under the name “Kitchen Speaker”.

As always. Be patient. I guess there was still some background sorting out going on when I first looked.

But you don’t need to be too patient. The whole setup, from taking it out of the box to having Spotify music playing by voice command took maybe five minutes.

There isn’t a remote control, apart from the app itself of course. But you don’t need the app to play music. “Okay Google, play some Deep Purple” resulted a few seconds later (as it happens) in “Child in Time” from Deep Purple in Rock from Spotify. No app needed, but also no remote control.

Except, “Okay Google, turn up the volume”. As easy as that. No hands needed. The LEDs briefly indicates volume levels.

But I did find that when I turned up the volume to a good room-filling level, the speaker could no longer hear me. I had to shout at it from so close I could reach out to the controls.

That apart, the Google Assistant side of the Panasonic SC-GA10 operated pretty much identically to a Google Home or Google Home Mini.

What can OK Google do?

Practical stuff: Like ask about the weather or set a timer.

Research: “Okay Google, how much is 7.4 trillion Japanese Yen in Australian dollars”. And an ever-growing list of other things. Google is busily working on broadening what its engine can understand.

Expect to experiment: “Okay Google, give me a list Google Assistant commands”. That’s what I said, but the device informed me that “Okay Google, what can you do” would do.

Mastery will take a while.

Music – how does it sound?

But of course, you can pick up a low-cost Google Home Mini if OK Google is all you want to do.

You buy a Panasonic SC-GA10 to make music sound good. It did that rather well with nicely balanced sound. There was decent mid-bass. You can get it to go fairly loud with a bit of Deep Purple from Spotify.

Just as importantly, when I played Schubert’s String Quintet from my network server (using the Panasonic app), it sounded smooth and dynamic. That was in FLAC format.

Aretha Franklin’s I Never Loved a Man the Way I Love You, was also in FLAC format with 24-bits of resolution and 192kHz sampling. It worked beautifully.

The Panasonic app is well organised. Its job is mostly to manage your music and individual speaker settings. You can change the bass and treble levels or choose a preset EQ. If you want to create groups of speakers for multi-room operation, then you use the Google Home app. And a multi-room system is not limited to a single brand.

The Panasonic SC-GA10 also showed up as a DLNA speaker and a Chromecast speaker in other apps, and as a Spotify Connect speaker in Spotify.

What it won’t do is AirPlay, so if you have an Apple-centric home, this is not the device for you.

GadgetGuy’s take – it adds value to the Google ecosystem

Panasonic has also Chromecast enabled one of its micro sound systems, and another couple are designed to switch on automatically if a Chromecast Audio device plugged into them receives a signal. So it looks like Panasonic is going fairly heavily into the Google Chromecast eco-system.

With Google Assistant support and respectable sound, the Panasonic SC-GA10 is a very good start on that.

GadgetGuy covered the launch of this and the 2018 Panasonic range of OLED and high-end LCD TVs here.

Panasonic is celebrating  100 years of reliability as well.