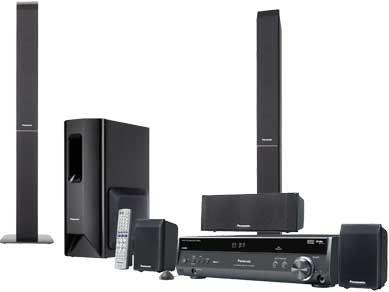 This system from Panasonic is a low cost ($769) home theatre in a box, to which has been added the SH-FX67 wireless adaptor ($219; pictured front). Before looking specifically at this system, let me describe the adaptor: a 2.4GHz wireless transmitter ‘card’ that you place into a slot on the back of the home theatre system, and a receiver/amplifier with a built-in stereo amplifier (rated at 125 watts per channel into 3 ohms at a very un-hi-fi 10% THD).

Because of the card transmitter, this product is tied very firmly to Panasonic products. However the company has quite a few units available that support the system, including the new Blu-ray home theatre system. This actually comes with two of the wireless units included which allows it to support all four surround channels in this 7.1 system (a switch is provided for configuration).

As far as the wireless side of things went, the system worked very well. With the rear speakers powered by the wireless adaptor, though, the surround sound amplifiers in the SC-HT65 (2 x 125 watts) have nothing to do, meaning you’ve paid for two channels of amplification that you can’t use.

The system comes with a calibration microphone and an automatic calibration routine that takes the pain out of setting up. The main speakers seem imposing, since the front pair comes with stands and heavy bases on which to mount them. However the front pair and the surrounds each have to manage with a single 65mm driver, while the centre channel gets two.

While there is a great deal of power claimed of the amplifiers, the sensitivity of the speakers is rated at just 80dB (82dB from the centre channel), so you need roughly eight times as much power as you would of speakers with average sensitivity to achieve the same volume level.

However, you can at any time change the speakers on this system to something better. The system does not support the manual setting of speaker sizes (it wasn’t clear if the auto setup did) so it would be wise to stick with satellite speakers. The subwoofer for this system is passive (that is, the amplifier is in the main AV receiver unit, not the subwoofer itself) so to replace this you will need a sub with speaker-level inputs.

Still the electronics performance was generally very good, so this makes a great low cost entry into home theatre, with the potential for future improvement.