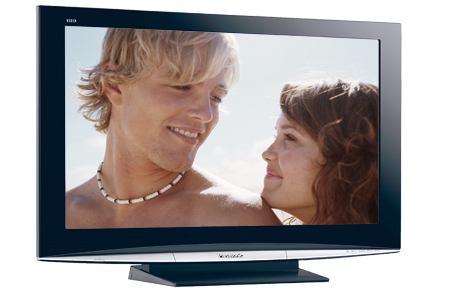 How much a new model can change things. Nine months ago I expressed here dissatisfaction with the then current 127 cm Panasonic high definition plasma TV. Now I am looking at the new model 107 cm model, and find myself in love!

Panasonic hasn’t caved into LCD dominance. It continues to insist that plasma is the best technology for 107cm and above TVs, and I would be hard put to disagree. It manages to pack full high definition performance into this panel and into this price category.

The TV comes with a full high definition TV tuner, plus an analog one. There is a good range of inputs and, concealed under a flap on the front panel is an extra set of AV inputs, including HDMI. Also there is an SD card slot, allowing you to directly display photos from an SD card.

When my first review of the old 127 cm model was published last year, I faulted it for failing to support ‘1:1 pixel mapping’. This is the ability offered by some 1080p displays to switch off any kind of resizing of the image so that each pixel from the high definition source is simply transferred straight through to the screen, providing the most accurate possible picture.

But the fault was mine. The option was there, but you had to look for it. Hard. As with this TV. It only appears under the ‘Setup’ menu if you have a high definition signal being delivered to the display at the time that you’re surfing the menus, and even then only if you have the correct ’16:9′ aspect ratio selected. Do choose this for your Blu-ray viewing. For some reason, though, even with this setting the left-most column of pixels were not displayed. This had virtually no effect on the picture.

The TV implements a 100 hertz motion smoothing system of the kind that has appeared in other leading brands. Called ‘Intelligent Frame Creation’, it worked quite well on PAL DVDs, but on my Blu-ray test clip, it quickly became confused, producing artefacts in the image, and then seemingly switched off during the most complex picture elements. It’s probably best to leave this switched off most of the time.

Among the picture modes available are ‘Dynamic’ (too bright and inaccurate), ‘Normal’ and ‘Eco’. Normal gives generally good results. Eco is not what it seems: this adjusts the settings according to ambient light. In a brightly lit room, it used nearly as much power as ‘Dynamic’, but this nearly halved when I switched out the lights.

Nevertheless, I did find the ‘Dynamic’ mode useful because I was able to change its settings. My office is brightly lit and this TV has reflective glass, so the picture was a little washed out by reflections in the room. Cutting the ‘Contrast’ setting on the ‘Dynamic’ mode from 100 down to 75, and changing the ‘Colour Temperature’ to medium, allowed the TV to show a lively bright image despite this.

With the lights off in my room I chose ‘Normal’ and enjoyed the smoothest, deepest blacks I have lately seen on any TV. Along with glorious clarity, truly life-like colours, and superb colour depth.

If the TH-42PZ800A is representative of Panasonic’s entire new range of plasma HDTVs, I would have to say that they are on a winner. Despite the seeming dominance of LCD TVs, this TV shows that plasma is still the best.