LG’s Optimus 3D combines a fast processor, Google’s Android operating system and technology for capturing photos and video in 3D and viewing them – without special eyewear – on its own 3D display.

LG’s Optimus 3D takes some of the things we know and love about modern smartphones, and gives it a three-dimensional twist.

Like competitive Android handsets, you’ll find a dual core processor, graphics chip, support for WiFi 802.11 b/g/n, DLNA, Bluetooth 2.1 with A2DP, a microUSB port for charging and data transfer, GPS, and generous internal storage, with 8GB on offer plus a microSD port for expanding the memory.

You’ll also find Google’s Android operating system here, albeit a slightly older version. Like the Optimus 2X before it, LG has equipped this handset with Android 2.2, also known as Froyo.

Then there are the new features, the ones that make the Optimus 3D a unique device in the overcrowded smartphone market.

A first for a phone released in Australia, the Optimus 3D has two 5 megapixel cameras on the rear of the handset, each capable of snapping 3D photos in either 3, 2, or 1 megapixel quality.  Video can also be captured in 3D at 720p quality. 3D is deactivated by pressing a button on the side of the handset, after which shooting in 2D affords 5 megapixel stills and 1080p video capture. A VGA camera also sits on the front, ready for video chat applications.

The 800 x 480 screen also differs from those found on more commonplace smartphones: a 4.3 inch autostereoscopic touchscreen. This display allows you to view images and video in 3D without have to wear special 3D glasses.

A micro-HDMI port has also been provided on the side of the handset, allowing you to share your 3D creations with a 3D TV.

Unlike the last LG smartphone to cross our test bench – the Optimus 2X – the Optimus 3D performs impressively. Flicking between screens, applications, web browsing, Twitter, Facebook, and running the odd game yields an experience that is intuitive and enjoyable.

It’s not just the overall speed of the Optimus 3D that pleases, it’s the feel. It’s nicely weighted, feels solid and, despite its plastic body, is easy to grip.

Battery life is surprising too, easily lasting through a day of social networking tasks, web surfing, checking email, shooting in 3D and playing the inbuilt 3D games. In fact, if you’re going to use the phone to make phone calls and take 3D images, you might even get close to two days work from the Optimus 3D.

The onscreen keyboard surprised too, but not in a good way. While LG’s modifications to Android’s keyboard make it responsive enough, we found that the user dictionary didn’t want to recognise Australian or English spelling, insisting instead that we adapt to the US vernacular. The limited dictionary options mean there’s little scope to address this, but most annoying of all was the handset’s insistence that the letter “i” never be capitalised. 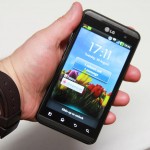 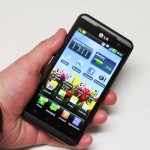 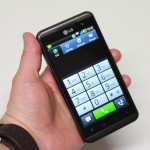 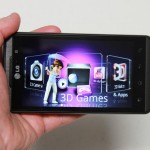 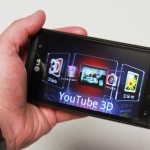 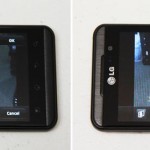 We can’t actually photograph how the 3D jumps from the screen, but we can show you how two images blend (left) to form a 3D image (right). 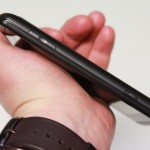 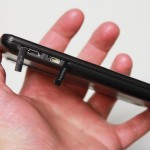 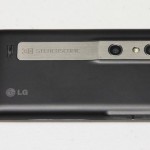 The Android interface is pretty standard, with four icons at the bottom of the screen – phone, messaging, contacts, and applications. Unlike other handsets, though, you can’t customise these.  There are also seven homescreens which can be sorted by pinching and organising. You can populate these homescreens with a few Optus service widgets, but this is about the extent of the customisation possible from this phone.

Call quality isn’t the most spectacular either, sadly. With more handsets beginning to support high definition voice quality, the LG Optimus 3D lags the pack. Sometimes we struggled to hear who was on the end of our phone calls, resulting in shorter than preferred conversations.

The key differentiator between the Optimus 3D and other Android smartphones is clearly the 3D function, but is it any good?

Picture stills actually impressed, with some images rendered in better quality and with more depth than those from the Fuji Real 3D W3 camera. Good ambient light is necessary however, especially as the flash doesn’t fire in 3D mode – though this may have been specific to our review model. The flash worked without a hitch in 2D, however.

Viewing images, however, is not as satisfying. You have to rotate the phone to a landscape view, for starters, which because one image is being displayed over the top of another, causes screen brightness falls away sharply.

We can't actually photograph how the 3D jumps from the screen, but we can show you how two images blend (left) to form a 3D image (right).

There is also an extremely narrow sweet spot. Once you’ve found it, the 3D illusion locks solidly, but you need to remain still to maintain it. In a moving bus or a train it’s harder to sustain, and images tend to ghost strongly. It can be pretty trippy.

Then there’s the content…or absence of.

Outside what you generate yourself and the four preloaded games – which exhibit little 3D effect and poor control schemes – there’s little to occupy here. LG’s own “App Advisor” program offers just two extra games – an augmented reality program and an archery game – and the company’s YouTube 3D space provides but a few trailers and a smattering of user-uploaded content.

It all adds up to a lack of commitment to the 3D idea. LG needs to back up its 3D hardware with a content service  – similar to that promised by HTC upon the announcement of its Evo 3D – to make 3D more than just a gimmick.

The 3D features on the Optimus 3D are an entertaining inclusion for creative types, but posibly not a strong enough inducement to buy on their own merit. Lucky for LG, then, that its latest handset is accomplished in its own right.

LG channels Nintendo with a glasses-less 3D phone in Australia

LG makes 3D portable with a tablet and a phone