Outside of the trusty stylus and a pair of headphones, the most useful accessory for the iPad is probably the physical keyboard, making it possibly to turn Apple’s popular tablet into an awesome 9.7 inch laptop. Logitech has released a few of these in the past year, and the new Ultrathin tries to make the keyboard more of a magnetic smart cover by combining the technologies.

The third iPad external keyboard we’re reviewing this year, the Logitech Ultrathin Keyboard Cover takes an external Bluetooth keyboard and throws it into a slimline aluminium case with a magnetic hinge.

It’s literally a snap-on keyboard, taking on the same style of magnetic hinge as what’s normally seen on the Apple Smart Covers.

Unlike these accessories, however, the magnetic hinge is made of plastic, connecting to a plastic keyboard resting in an aluminium case with a built-in battery.

There aren’t many buttons or ports to speak of, with only the standard microUSB port for recharging the keyboard, an on-off switch, and a Bluetooth connection button, all along the right edge.

The box doesn’t feature much outside of the keyboard cover, with only a small manual, microUSB to USB plug, and a tiny cleaning cloth.

One of the best accessories for the iPad came from the release of the second-generation model: the smart cover.

The concept of a magnetic cover that could switch the iPad on and off was a pretty cool idea, and now Logitech is mixing it with a tactile keyboard, making it possible to not only protect your iPad screen, but also let you type on the go.

Similar to one of the first Logitech iPad keyboards we reviewed, there’s a look here that echoes Apple design, with a slick aluminium chassis that tries its best to complete the iPad, compared with some of the more MacBook inspired designs we see from time to time.

The magnetic hinge does connect automatically, allowing the iPad to open up like a book and see the keyboard. You’ll still need to sync up the Bluetooth connectivity, however.

But this book-like hinge isn’t what allows you to type on the keys, however, with the magnetic hinge only providing a convenient way to carry the keyboard. Instead, you need to detach the keyboard cover and position the iPad in the supplied crevice, holding the iPad in place with a magnetic strip.

For the most part, the magnet holds the iPad in a slanted viewing position, making it easy to view what you’re writing. Typing is reasonably comfortable, though you’ll find a fairly shallow set of physical keys here, not surprising given how little thickness there is. Most people won’t mind the sacrifice, though, as you are grabbing a fairly thin keyboard that you can take around with you.

But just like when we reviewed the Logitech Keyboard Case for the iPad 2, intertia is still your greatest enemy.

If you’re sitting on a bus, aeroplane, or train, and the carriage jerks, there’s a high likelihood that even when the Ultrathin is sitting in the magnetic crevice, it will fall forward to you. It’s better than falling backward and having it crash to the floor, but sadly, the magnet just isn’t strong enough to keep the iPad in place.

We’re a little confused why Logitech didn’t think it was necessary to have some form of light on the keyboard indicating the Caps Lock key was in use.

Most of the iPad keyboards we’ve seen include a small light somewhere in view showing you when the Caps Lock key is pressed, but there’s nothing like that on the Logitech Ultrathin, so you’ll only know when it’s pressed when BIG LETTERS appear on screen, except of course when you type in passwords hidden by asterisks or small dots.

One other issue we have is what happens with the case when you decide to use your iPad without the keyboard.

Because of the solid aluminium build, the Ultrathin just isn’t flexible at all and snaps off from its hinged connection when you try folding the case back.

It’s completely different from the fold-back Smart Covers that we saw Apple create for the iPad 2, because even though the hinge is similar and connects automatically with the magnets found in the side of the iPad, the Ultrathin Keyboard is just too heavy and not flexible enough to fold back, so detaches in the process.

The magnets are strong enough to hold the keyboard for a short amount of time... before it detaches and falls.

It’s still not without its fair share of problems, though, and we’d suggest keeping some sort of a carrying case or backpack with you for when you don’t want to type, because otherwise you’ll be left with a cover and nowhere to store it. 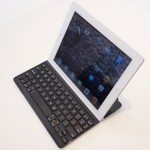 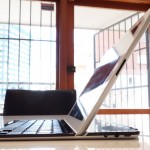 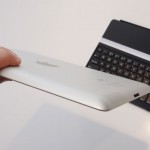 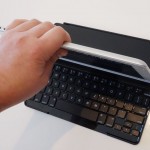 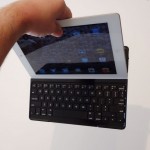 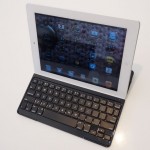 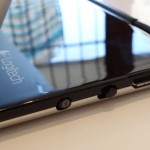 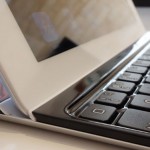 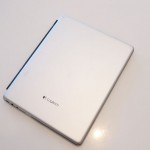 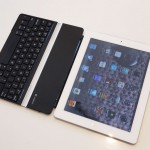 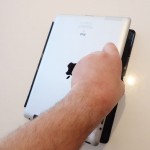 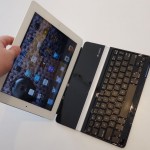 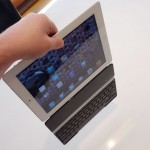 The magnets are strong enough to hold the keyboard for a short amount of time… before it detaches and falls.

Review: Logitech Ultrathin Keyboard Cover for iPad
Price (RRP): $99.95 Manufacturer: Logitech
Built out of aluminium; A reasonably thin iPad keyboard; Magnet holds iPad in place when typing in most situations;
No Caps Lock light; Intertia is still your greatest enemy; If you're not using the keyboard, the case snaps off when folded back;
Overall
Value for money
Ease of Use
Design
3.7Overall Score
Reader Rating 0 Votes
Share
Tweet
Share
Share
Tweet
Share