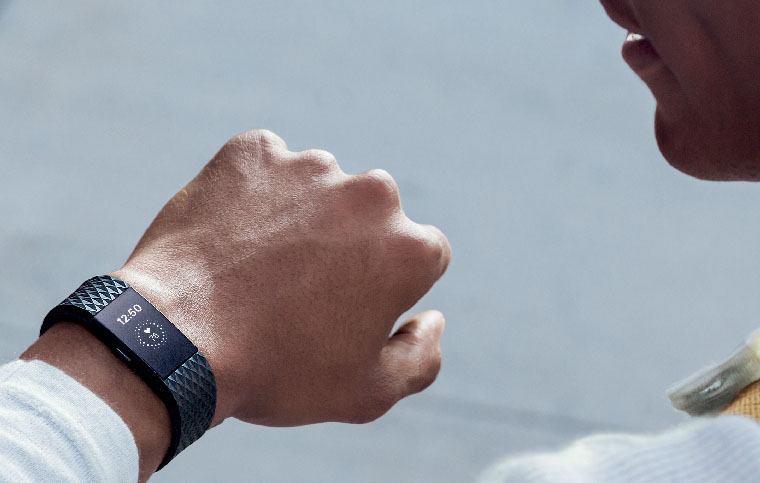 There are plenty of options when it comes to choosing an electronic fitness aid.  What kind of fitness regime do you propose for yourself? Does the gadget come with a sufficient range of related devices so that it will cover all your needs? Does the matching software provide all the functionality that you’d like?

I more or less stumbled into the Fitbit camp a couple of years ago without thinking about any of those things. Nonetheless it has been a satisfying experience on those criteria. I started off with a Fitbit Charge HR, a requested birthday present. It has served me well, and fairly soon I added the Fitbit Aria scales. Apart from a brief dalliance with a Fitbit Alta last year for the purposes of a review, that’s what I’ve been using until now.

But Fitbit has since released the Charge 2, and it turns out to be a huge upgrade over its namesake.

The “HR” in Charge HR stood for “Heart Rate” because it could monitor that in addition to the usual movements. That functionality has been retained with the Charge 2. Beyond that it has an improved display and an improved band.

The old one had a more on less one line display. It was clear, but limited by space. The Charge 2 has a rather flexible display some 11.5mm across by 28 mm down, as near as I can measure it. That allows it to show three or four lines of information at once. Which lines is your choice, more or less. There are quite a few options which you set in the app.

You interact directly with the Charge 2 by using the single button, or by tapping on the unit’s face with your finger. The button is on the left, if you’re left handed; the opposite of the adjustment crown on a conventional watch. There are options in the app to set the watch for right hand use. This flips the display. You can also set the hand it is on as the dominant or non-dominant hand. This adjusts the counting algorithm for more accurate results.

Unlike the Charge HR or the Alta, it doesn’t come with a dongle to allow it to work with a non-Bluetooth equipped computer. I guess Fitbit figures that pretty much everyone has a Bluetooth-capable device these days. I used it with a couple of different Android phones (one at a time, of course), but I quickly checked and found that it also worked with the dongle from my Fitbit Charge HR plugged into my desktop. But, really, you’re going to get more value from the unit if go with the phone connection because then the Charge 2 can draw on the phones power and functions and, for example, use its GPS for route tracking and mapping. Or for providing notifications – including displaying the contents of SMS messages on its screen.

So in what way is the band better than that on the Charge HR? Only in one way really: it can be switched. When the Charge 2 was sent to to me, apparently onIy one with the teal coloured band fitted was available. Teal is a kind of light green colour. But they took mercy on me and protected the general public from me presenting an even more unsightly appearance, sending down a brown leather replacement band with the Charge 2.

That itself was quite interesting in that the general consensus around here (which means my wife’s superior judgement) was that it looked kind of plastic. It was so smoothly finished that it was hard to see as being leather. But that’s what it said on the box. After a few days of sweaty exercise I decided on a likeIy explanation. I think the leather has been very thoroughly sealed to be sure it doesn’t become sweat stained. Successfully so.

That said, while it aIways retained its colour and tone, on a couple of particularly hot days my wrist was stained a little brown by the band by the conclusion of a 5+ kilometre walk. It washed off quite easily.

Anyway, perhaps the most important point is that you’re not stuck, style wise. You can purchase one of three leather bands (the brown one supplied to me, one called “Blush Pink”, and the dark grey “Indigo” – $119.95 each), or a different colour of the “Classic Band” (Black, Blue Plum, Teal or Lavender – $49.95 each).

Fitbit doesn’t give the Charge 2 an “Ingress Protection” rating on water proofing, but it does have advice on how much it can take. To used its words, the Charge 2 is “rain-proof and splash-proof and can stand up to even the sweatiest workout,” but you should not “swim or shower with your tracker”.

At its core it does the same stuff as any of Fitbit’s other trackers: count your steps. But it adds to this the heart rate monitoring and, thanks to a Bluetooth connection to your phone, access to GPS for accurate distance and route tracking. And of course the aforementioned notifications.

The most noticeable thing about all this was how unnoticeable it all was. For the most part it worked pretty much without fuss, pretty much as advertised.

To get rid of the remaining fuss you might want to change a couple of things. Like, for example, switch off the “Guided Breathing Sessions” the watch periodically suggests you undertake. This, and all other settings, are made via the app. You may also want to switch off notifications that the app sends to your phone. With me, around six each evening it would tell me how many steps I had remaining before reaching my 10,000 step daily goal. And this was just plain irritating because my major daily walk is later in the evening.

What if you’re not near your phone? How long can you go between syncs? I did not check this, but according to Fitbit the Charge 2 packs sufficient memory to save “7 days of detailed motion data – minute by minute” and “daily totals for past 30 days”. Also, the lithium polymer battery is said to last “up to five days”. I did a lot of walking and wearing it full time – including during the night so it could monitor my sleep – while continuously connected to an Android phone, the battery meter would still be on around 70% remaining after a couple of days.

As always, human/machine interfaces can be iffy things. So don’t take all the reading as inerrant Gospel. Don’t use the distance tracking for legal purposes. Don’t use the heart rate monitor for checking the progress of a disease.

For example, at one point I was sitting in a plane, writing on my Surface Pro 4 with my right hand while the Charge 2 was on my left wrist, largely unmoving, except for when that hand reached for my phone to photograph another startling aspect of the ground for below. Somehow this has caused the step count to increment from 8328 steps to 8472 steps. That makes the easiest 144 paces I’ve ever taken.

I’m having a bit of fun there. No system can yet perfectly distinguish between closely related movements, and for the most part it was accurate when I checked. I’d find myself having doubts from time to time, so I’d start counting, or even retrace my steps and find that it was right all along.

Incidentally, when I landed on that trip I was in a different time zone, but the watch function continued to show the old time. It took a bit of digging around in the app, but it turned out that the setting for automatically adjusting the time zone was off. When I switched it on, the time was fixed.

Of course, it tracks you pretty much the whole time, but you can also mark specific bouts of exercise with a long press of the Fitbit’s control button. Fourteen types are permitted, with up to seven able to be shown on the device for ready selection. Obviously these include things like walking, running, biking, and workouts on an elliptical machine, but also include things like hiking, “spinning” (?!?), yoga and golf. Presumably by selecting the specific exercise more appropriate algorithms are employed by the unit to assess the exercise.

The coolest feature had to be the route recording. If you have it linked to your phone and you have your phone’s GPS switched on and you take your phone with you, then your route will be recorded and presented on a map in the app on your phone or computer. This seemed very accurate. It only works when you start an exercise event.

There’s a stopwatch function which I thought was going to be useful, but you can’t get a precise start because you have to hold the button down for a couple of seconds to start it.

I wore the Fitbit Charge 2 pretty much 18 to 24 hours a day (that is, including some nights), for over four weeks. I managed to avoid smashing it into lamp posts (my regular way of accidentally damaging wrist wear), so I didn’t stress test it too heavily. Nonetheless, it seemed reasonably resistant to wear and tear. With a few puffs of breath and a wipe with a microfibre cloth, the face looked as good as new out of the box.

Finally, there’s actually a third way in which the Charge 2 is a significant improvement over the Charge HR, and that’s when it comes to charging. Rather than a very fiddly, very shallow plug and socket affair, the Charge 2 comes with a spring loaded clamp that holds the Charge 2’s body in the right spot for the contacts to align. Easy, fast and a lot less frustrating. The other end of this short cable of course plugs into a standard USB power device.

The Fitbit Charge 2 is third from the top in the Fitbit line up but it shares with them the same app and a very good choice of information displays. None of them are really “watch-like”, which is where the more expensive models may suit some people more. Nor do you get the wide range of functions available from a smart watch which adheres to a relatively open system like Android Wear.

But if your interest is in an economical fitness-focused band, I don’t think you can go wrong with the Fitbit Charge 2.

Overall
Features
Value for money
Performance
Ease of Use
Reader Rating0 Votes
Good range of displays, nice styling, good visibility of display, respectable accuracy, notifications, useful tracking function
You’re locked into the Fitbit ecosystem which isn’t a problem if, as I do, you like it
4.4