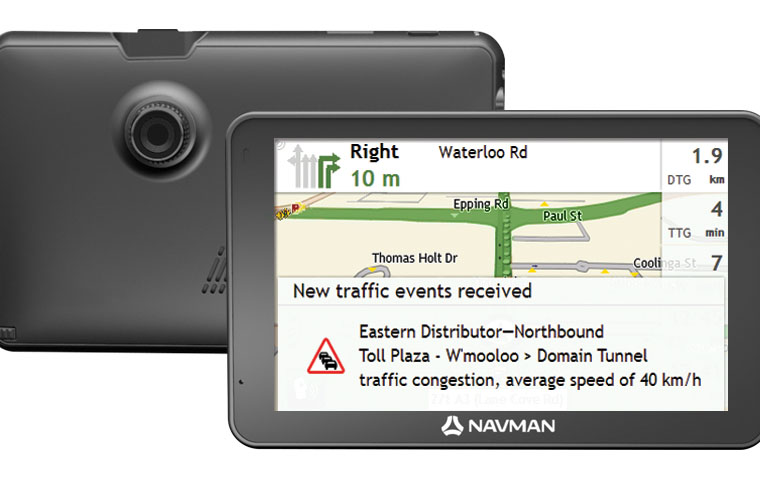 A car’s windscreen can get rather cluttered if you start sticking too many things to it. The Navman MIVUE Drive FHD solves that problem by combining a full high definition dashcam and GPS/navigation system into one compact unit.

The Navman MIVUE Drive FHD features a touch sensitive 127mm colour LCD screen for displaying menus and, of course, the map and directions. It comes with a two year warranty and free map updates for life for Australia (and New Zealand) on a monthly basis.

The unit features alerts for a wide range of “landmarks”, shows the speed limit for the road on which you’re travelling and can sound an overspeed alert. Of course it can navigate you to specified locations by both screen and voice and has a memory for lots of locations you can specify.

The full HD camera is mounted on the other side – a simple cylindrical protrusion of about a centimetre. The f/1.8 lens allows decent low light performance. It uses a microSD card to store recordings. A 16GB card is included. When the card is filled the earliest recordings are deleted.

The unit can also connect via Bluetooth to a phone for handsfree telephone operation.

Remember those suction caps that supposedly stick objects to smooth surfaces, but invariably fall off after a while? That’s not what the Navman MIVUE Drive FHD uses. It uses a suction cap that works. It works for three reasons. First, it’s a decent size, maybe 40mm across. Second, it is being applied to a very smooth surface, the glass of your windscreen. (You should clean it first.) Third, a built in lever applies a strong force to the cap to ensure that a very strong vacuum is maintained.

I stuck it on the windscreen and it remained attached, through some thirty degrees of temperature variation, for three weeks without the slightest hint of insecurity. Yet when it came time to pack it up for return, a pull on the tab had it off easily in a second.

A universal joint attached to the suction cap holds a mount for the unit itself. This attaches about one quarter of the width in from the left, and was flexible enough to allow a bit of give, particularly at the right hand side of the unit where there was the least support.

You’ll also need a power source, aka a cigarette lighter socket. The power cable plugs into the Mini-USB socket which you also use to plug the unit into a computer for software and map updates. It’s a touch under 1.3 metres in length to the head of the socket adaptor, so if your lighter socket is in an odd place, you should check whether it will reach. Another cable runs along the whole length of the power cable. I expect that is an antenna for one or another function, so you can’t lightly replace the power cable with an alternative.

The display screen was clear. It can switch brightness automatically between night and daytime operation. The map can be in 2D or 3D, with auto zoom if you like.

The swinging of the map as you round corners was fairly smooth with frequent refreshes rather than making big jumps.

Of course, the unit offers alerts for such things as exceeding the speed limit – you can set a five or ten kilometres per hour “over” allowance to avoid it being too irritating, or put it on “Auto”, where it makes up its own mind about the matter. Accident black spots, red light cameras, speed cameras, railway crossings are all alerted by default and can be individually switched off. Likewise for school zones, and you’ll want to use the switch-off option during school holidays.

The unit also supports broadcast traffic alerts. I received none during the review period. I’m uncertain if the system is even implemented in Canberra, but if it is the accidents and massive traffic snarls typically warned of are not a common feature here.

There are bunch of useful features, such as lists of petrol stations, food outlets, hotels and motels, ATMs and parking in your area, ordered by closeness.

Route selection was fairly fast. For some reason I’d inadvertently set my “Home” as somewhere in Adelaide (I actually live in Canberra). Choosing “Home” had a proposed route available in less than ten seconds.

The find facility was useful. I typed in “Riverside Plaza”, a small mall in the nearby NSW town of Queanbeyan, and the unit found it in about ten seconds, clearly searching through an expanding circle centred on my location. In the time it has taken me to type this paragraph so far the circle has expanded to over 300km (radius or diameter is unclear). When I selected it, the Navman presented the four travel options within five seconds: Fastest (18 minutes) through Economical and Easiest to Shortest (13.5km). For some reason, the Shortest was also shown to have a briefer travelling time (16 minutes). Perhaps travelling conditions changed in the couple of seconds between the two results being calculated.

Anyway, the proposed routes were typically sensible, and didn’t lead to me becoming submerged in Lake Burley Griffin, so that was fine. The audible instructions were clear.

A short trip home from where I’m sitting under a pine tree typing gave the same results for Fastest, Economical and Shortest (2.2 kilometres, six minutes) and a longer result for Easiest (3.1 kilometres, seven minutes). Why? The first three take you along a road with three particularly irritating speed bumps. The Easiest route avoids them. Sounds good to me.

(When I drove the way of the bumps, the unit offered no warning about them. That suggests that they aren’t individually recorded in the data, but that the road that they’re on has a higher “difficulty” score which is used in route calculations.)

As mentioned, you can pair the unit to your Bluetooth-capable smart phone and use the Navman itself for calling and then for handsfree talking. The pairing with an iPhone was smooth enough (you will need to enter the PIN which is 1234) and on first pairing the unit asks if you want to load in the contacts from the phone. It took only a minute or so to suck in the five hundred or more on mine.

Then you can make calls using the Navman. That worked fairly well in terms of acoustic clarity, but since there’s no voice recognition, I can’t see that many people are likely to use it. It’s the touch screen, you see.

We’ve all been spoiled these last few years with the touch screens on phones and tablet, which work with the lightest of touches and respond to multi-touch and sliding fingers. This one doesn’t. To scroll you have to poke an arrow. Selecting anything requires a reasonably firm touch, but there was a bit too much give one the right hand side of the screen to allow this without putting a finger behind the screen for support. All that made for very inefficient contact selection.

There are no settings for the Dashcam. It runs the whole time at full HD (1920 by 1080 pixels). The only option is to not have it running. If it is off, the mighty G-force induced by a collision will start it running. There isn’t a way of marking a specific recording for retention, so if there’s an incident you should save the recording fairly soon to another device.

Documentation on looking at the video taken by the device is extremely sparse. Nothing seemed to happen when I plugged the whole unit into my computer, so I popped out the microSD card and plugged that into a card reader. The files are standard .AVI ones, with full HD resolution (and sound) so you can play them back in lots of different players. The date and time, speed and GPS location are imposed on the bottom right of the video.

Each video is one minute long and used about 110MB of space. I used a 32GB card and it filled up until around 500MB was left before deleting old recordings. There were 279 recordings, so a 32GB card (the maximum recommended) is good for a bit more than 4.5 hours of recording.

For some reason the disc provided with software (for updating the maps and generally managing the GPS unit) doesn’t include the MiVue Manager software which provides enhanced viewing of the videos so you have to download that from the Navman site. This software only works in a fixed window size on your computer, or blown up to full screen (in the latter mode, you don’t get the additional info-graphics). In regular viewing mode the software shows speed, position, and forces upon the car. Click a button and you can see location on a map.

The picture isn’t going to going to win any Oscars, but it was clear and the colour was bold, and there was plenty of detail. The wide angle gave a good view, although I found with the unit mounted towards the dash (the best place for the GPS function) the bottom of the picture was occupied by the bonnet of the car. You can view the camera output on the navigation screen, so that can help you position things just so.

The Navman MIVUE Drive FHD makes for a largely convenient combination of GPS car navigation and dashcam protection, available at a very reasonable price. If you need both functions, combining them in one unit makes a lot of sense.

Overall
Features
Value for money
Performance
Ease of Use
Reader Rating0 Votes
Single compact unit for both navigation and dashcam protection, inexpensive, lifetime map updates included
Touch screen can be difficult to use
4.1

The future of portable car GPS navigation and dash cams