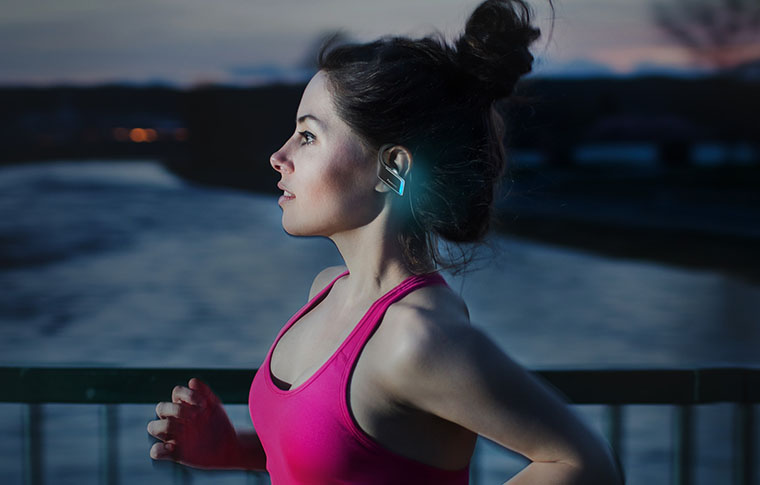 Somehow “Wings” does seem to be an appropriate product name for the Panasonic Wings RP-BTS50 BTS Bluetooth Sports earphones. The main bodies, one attached to each of the earbuds, are parallelograms in shape and simply scream superhero speed.

They are a little heftier than many Bluetooth earbuds, so perhaps that’s why they come with loops from the leading edge of each parallelogram into which one’s ears are inserted. The two sides are linked by a cable which goes behind the neck. That has a loop clamp which can be slid up to shorten this cable, allowing it to be brought up to rest on the back of the head rather than the neck.

And that’s good. Cables on the neck feel like they want to drag the ear pieces from one’s ears every time the head is turned.

There’s a small remote on the cable near the right ear with a multi-purpose button for on and off, pairing and call answering, plus two more buttons for up and down volume control.

The Wings are IPX5 rated, which means that they can cope with jets of water being sprayed at them. That in turn means: don’t immerse them, but if it starts raining when you’re out, you should be fine.

The earbuds are tipped with silicon and three sizes are provided. They weigh 22 grams. They also have blue LEDs which can be switched on for higher night time visibility for joggers.

They pack 90mAh Lithium Polymer batteries which are good for six hours of operation and take one and a half hours to charge. They are charged via a standard MicroUSB socket. A short USB adaptor cable is provided. As is a pouch.

The earbuds pack 12mm drivers. Unlike a lot of other makes, Panasonic has not skimped on the Bluetooth codecs. In addition to the standard SBC codec for music, they also support AAC (higher quality for many Apple products) and aptX (higher quality for some Android devices).

As is usually the case with in-ear earbuds with over-ear loops, it takes a moment the first time you use them to get them comfortable. On my ears when the earbuds were properly in place the loops didn’t really support any of the weight but, hooked behind my ears, they did add a feeling of security.

Switching on and offer was easy to do by feel, thanks to a pointy bit behind the control bar marking the centre. That in turn marked the position of the centre button on the other side of which was the play/pause/answer button. So thumb and index finger gripping over that made for easy operation.

Well, reasonably easy. The buttons are fairly heavily sprung, so a firm press is required. To switch on the LED – oh I suppose I’ll call them “safety lights” – requires a simultaneous press on the volume up and down keys. I was unable to do this without taking of the earphones and using two hands. The general operation of the volume controls was easy (again with firm presses required) once I’d remembered which was which: the end closest the earphone was “Up” while the other end was “Down”.

I used them extensively with an iPod Nano and a Samsung Galaxy S7 phones. In both cases pairing was unproblematic.

The sound quality was rather good. There was a fine overall tonal balance, with the bass in particular at the right level rather than being unduly emphasised. The deep bass extension was reasonable, and helped thanks to the good seal provided by the silicon tips. With some music there was a tendency to bring out some sibilance, such as with Jeff Buckley on his sole studio album “Grace”, but the treble sounded extended without being unduly prominent. Clarity was good on spoken word.

They went to a reasonable volume, but the ultimate level was gain limited. That is, there was no way I could run them into distortion, which in turn means that any material recorded at a low level might not be able to be turned up to a high enough level to be entirely satisfying. Most music, though, did go satisfyingly loud enough for me, but not necessarily those who wish to give themselves a real blast.

Let me repeat, most people will be perfectly satisfied with the volume level. Remember, too, that because the silicon tips seal off your ears, the sound receives little interference from the noises in the outside world.

The connection quality and range was good in general. The usual left-pants-pocket Bluetooth blind spot was in effect with these earphones, but they were inelegant in their handling of this. If the signal dropout lasted more than a couple of seconds the earphones appeared to disconnect, and while they reconnected automatically, that took several seconds.

The earphones automatically switch off after a while if nothing is playing. According to my stop watch, it’s after five minutes (and up to fifteen seconds if you want to be precise). Remember that if you’re planning on hands free use with your phone. Hands free works perfectly well in terms of stopping music when a call comes in so you can answer and talk. But you can’t just wear them around for hours with no music running for hands free calling because they will have switched themselves off. Likewise they don’t appear to work with Siri or Google Now.

The Panasonic Wings RP-BTS50 Bluetooth Sports earphones are a decent solution to the problem of listening while you’re being active. Being weatherproof is a definite advantage.

Overall
Features
Value for money
Performance
Ease of Use
Reader Rating7 Votes
Good sound, rain proof, good seal against outside noise, comes with pouch
Control buttons can be stiff, reconnection forced when there are brief dropouts
4.1