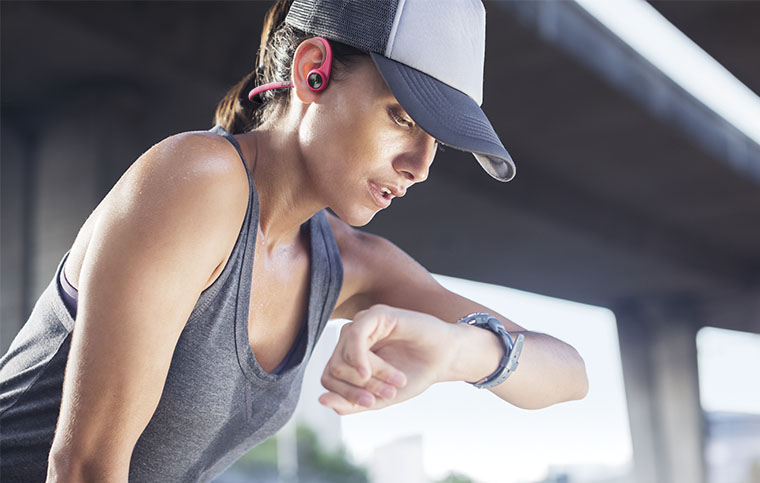 Continuing my long search for practical exercise-appropriate Bluetooth headphones, I’m having a look this week at the Plantronics BackBeat FIT earphones.

These are the ends of a single piece unit with a flexible silicon band and loops to go over the wearer’s ears. They come in a nice range of, as Plantronics calls it, “five bold new colours”. I was supplied with relatively conservative looking blue models (“Power Blue”).

Apart for what appears to be a quite robust design, they are waterproof with an IP57 rating. The “5” means dust proof. The “7” means able to be immersed up to one metre. That typically means that if you drop them in the drink and whip them out in a reasonable time then dry them off, they’ll be fine. It doesn’t really mean you should go swimming with them, and in any case Bluetooth doesn’t really work in water.

They are also finished in something called a “nano-coating” and we know that there’s nothing nano stuff can’t do. In this case, it is designed to make them sweat proof.

The ear pieces are fitted with silicon tips, one size only. That had me perplexed for a little while until I realised that I has trying to use them quite the wrong way. I’m used to jamming silicon tipped earphones firmly into my ears, but these just wouldn’t go. It wasn’t the tips so much as that the geometry of the ear loops held them so the tips were hovering right above the ear canal openings, gently touching but without any pressure or seal. After futilely trying to get them to stick in firmly, I realised that this was by design.

Plantronics does not mention AAC or aptX as audio codecs, so it’s wise to assume that the earphones are limited to the standard Bluetooth stereo music codec: SBC. In fact, the specification sheet says that it uses something called a “HQ custom SBC codec”. My understanding is that there is only one SBC codec, but I suppose it’s possible that Plantronics may have developed a decoder that does a better job of things.

They use 13mm speaker drivers with neodymium magnets and are specified to have a frequency response of 50 to 20,000 hertz, total harmonic distortion of less than three per cent and a sensitivity of 105dB for one milliwatt of input. A sensitivity rating is not of much use when the power output of the built in amplifiers is not stated. They weigh 24 grams in total.

Plantronics says that the battery life is eight hours on a full charge and fifteen minutes of charging is sufficient for an hour of playback time. Two hours is needed to deliver a full charge when the battery is empty. Indicator lights show when full charge has been achieved. The charging port is covered by a cap which was easy enough to swing aside without fingernail damage. A charge can be maintained by the earphones for up to six months when not in use.

The controls are a little unusual in operation. You increase the volume by pressing the stud briefly, as many times as necessary to achieve the desired level. You lower it by pressing and holding the stud. Skipping tracks involves a double-tap on the main button. Skipping backwards requires a hold, then double taps. You can’t fast forward or rewind using the BackBeat FIT controls.

A voice in your ear lets you know what’s going on when necessary. For example, when you hit the maximum volume, or when you power them on. In the latter case, the (cultured female) voice also tells you that you’re connected to the source device (if you are) and gives you a battery life estimate in hours.

I rather enjoyed the sound from the BackBeat FIT earphones. It was clean and clear, with good tonal balance across the upper bass, midrange and treble frequencies, and a very slight tendency to brightness. The fact that they did not seal off the ears from surrounding sounds lent the music they produced a nice airy feel.

The downside of all this was that while they were capable of going quite loud, loud environments could still sometimes overpower them. And the lack of an ear seal meant that mid-frequency bass, while pleasant and tuneful, was relatively low in level, while there was almost no really deep bass.

I now know (after reviewing the Beats Solo 3 headphones) that reliable, uninterrupted Bluetooth connections are possible with the playing device in a pocket. The question is, can a set of earbuds manage this? The BackBeat FIT set goes much of the way there.

In essence, connectivity was perfect when my iPod Nano, my Android phone or an iPhone were sitting on a regular surface and I was within the usual ten metres of the device, even with normal internal walls intervening. It was somewhat problematic in a pocket, though, or held in my hand.

The best position was usually the right hand pocket in my trousers, especially if I took trouble to make sure there was nothing plastic or metal (coins, for example) in the pocket, and wasn’t carrying a plastic bag of groceries in my right hand near that pocket. Right rear pocket was also often effective. This would generally maintain a solid connection, unless I turned my head too far to the left, which would cause it to drop out.

Drop outs were easy to identify as headphone issues rather than gaps in the source file, incidentally, because they had a characteristic in which the left channel dropped out an instant before the right, and likewise came back an instant earlier.

It was at its best, reliability wise, on a dry day (that is, with little humidity). On damper days, it seemed more prone to dropping out. Bluetooth is less effective with water on the signal path.

Bluetooth means computer stuff, so if your download the BackBeat FIT Companion app (iOS or Android – I used the former) you can check the firmware of your BackBeat FIT and update it to the latest. The Plantronics Hub app allows you to find your BackBeat FIT if it’s connected to something, and has a history function so you can see where it was last connected.

Finally, maybe there is something to this nano stuff after all. After six weeks of very regular use in very warm weather, with many hours outdoors involving such sweaty activities as mowing the lawn in thirty Celsius heat, the Plantronics BackBeat FIT still looks brand new.

Comfortable, light, decent sounding, practical and a reasonably solid connection (once you work out which pocket to put it in), the Plantronics BackBeat FIT Bluetooth earphones are a good fit for active people.