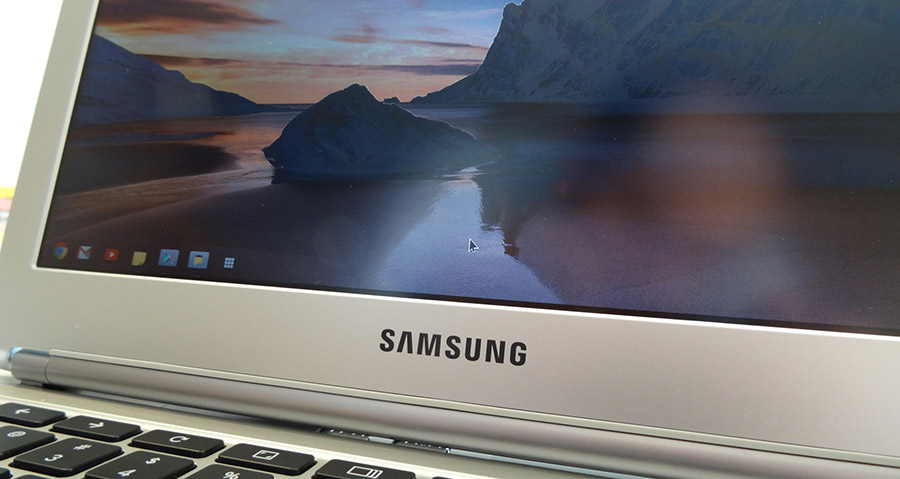 Whether you want to acknowledge it or not, the area once known as “netbooks” is more or less dead, but Google isn’t leaving it alone, and with the Chromebook movement, is trying to provide an option for people who don’t want to spend more than $400 on a web-capable machine. For fifty less than that, Samsung is offering its interpretation in the form of a slim and light notebook.

Launched just over a month ago in Australia, Samsung’s XE303C12 Chromebook doesn’t have a fancy name, but it does carry some specs that put it on par with tablets, provided you forget about that whole touchscreen thing.

One of these is the processor, and Samsung has stuck with something it knows can take a Google operating system: the 1.7GHz Exynos dual-core processor used in the Google Nexus 10, a tablet we have yet to see released in Australia.

Like the Chromebook released by Acer, Samsung believes only 2GB RAM is needed for the operating system, but unlike Acer, has gone with a 16GB solid-state drive for the storage instead of the 320GB conventional hard drive we found on Acer’s Chromebook.

Wireless connectivity is pretty standard here, with 802.11 a/b/g/n here, as well as that new fandangled 802.11 ac support, and Samsung has also included Bluetooth.

Wired ports are reasonably varied, with one HDMI, one USB 2.0, one USB 3.0, a headset jack, and an SD card slot, as well as the power port for charging the laptop up.

Two small speakers are included, and you’ll find a microphone and webcam on this machine too, for those times when you want to hangout with your friends online.

A SIM card slot can be found on the back of the Chromebook, though it appears to be disabled in this model and has rubber lodged inside to dissuade you from using it.

Finally, there’s Google’s Chrome OS, which is the platform that comes preinstalled here.

With only one Chromebook reviewed to date – the $299 Acer Chromebook – we’re still coming to grips with what a “Chromebook” actually is.

If you haven’t heard of one or seen it in the flesh, the concept is this: Google’s Chrome web browser as an operating system, with all of Google’s services united under it.

You can surf websites and have those tabs open up on a different computer, provided you’re signed into your Google account and using Chrome browser there.

If you’re creating and editing documents on a Chromebook, all your files will be saved online, ready for you to edit and/or print them out at another computer.

In essence, Google Chromebooks are a platform agnostic platform, a concept that means you can take your browser and its applications with you, work on the go, and as soon as you’re in range of a wireless network, synchronise everything for use later on.

There are some limits to how this actually works, but in practise, it’s a neat idea, and as we’ve mentioned before, there are people we can see this working for, especially since there are no viruses for this platform (not yet, anyway).

Acer’s Chromebook was the first we looked at, and while we liked aspects of that machine, there were elements that didn’t work out perfectly. Bits like the glossy screen, the massive hard drive, and a keyboard that had barely been redesigned from Windows were just some of these, and in Samsung’s first model, it’s nice to see these issues aren’t shared.

We’ll start with the keyboard and usability, because these are two areas which feel better overall, as well as the design.

While Acer’s reminded us of a rebadged “Happy” netbook, Samsung’s Chromebook is like a smaller and thinner version of its Chronos notebook.

With a depth around 17.5mm when closed, this isn’t a thick machine, and sitting at just over a kilogram (1.1kg, in fact), it’s not heavy either.

The ports are all located on the back by the screen hinge, which we suspect Samsung has done to make this notebook look and feel slimmer, and it works well. In fact, the screen hinge sits inside a crevice just before the back, providing a small ridge to hold the laptop when it’s closed, which makes it easier to grasp.