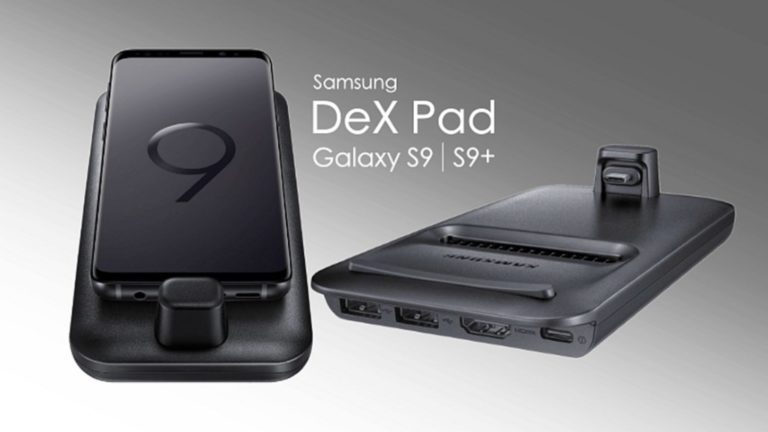 The Samsung DeX Pad (Desktop eXperience) can turn its Galaxy S8/+, S9/+ and Note8/9 into a very passable desktop computer. That is replete with an large 2K screen, mouse and keyboard.

I reviewed DeX Station back in May 2017, and it was quite impressive then. Turning your smartphone into a desktop running Android apps is a great idea. As those apps include Microsoft Office and Outlook it is even better.

For a time I travelled (a lot) with a Logitech K840 HTPC keyboard and trackpad and connected to any convenient TV or monitor via HDMI out. I could do most things that I did on a Windows PC.

My review comments then included:

Some things don’t change, so on with the review. GadgetGuy Val Quinn also announced it back in February.

The interface is a little more modern than the older DeX Station. I was able to test it with a Samsung Galaxy S9+ and a Note 8 (running Android 8.x).

The biggest difference is that the DeX Pad allows the smartphone screen use as a touchpad.

Up comes a full desktop screen looking suspiciously like a Windows screen. This is not Android but a full 16:9 landscape experience. You can switch between Android and Desktop mode.

For starters, apps open in separate windows, and you can resize them to fit several on a screen. Native Samsung and Google apps all worked well. Some apps refused to display more than a ‘phone-sized’ screen.

The performance was excellent. There was occasional cursor lag, but Galaxy class devices have top-of-the-range processors and RAM.

Connection to a D-Link AC5300 router was at 867Mbps. Everything from a WD My Cloud server was available via its IP address. Opening, copying and manipulating files was not far off gigabit ethernet speeds.

It can use enterprise-ready VDI (Virtual Desktop Infrastructure) solutions from cloud-based ecosystems including Citrix, VMware and Amazon. This might be the answer for road warriors. It is cool to see a full Windows 10 desktop running off an Android handset – if you are into that kind of thing. RDP support is standard as well.

GadgetGuy’s take. If you have a Galaxy phone, there is a good use case for it

There is a niche. And it is in the enterprise. It is for those who can afford the Galaxy Class device. Those who want to do presentations on the fly, check email or word process on a larger screen. It is the perfect ‘thin-client.’

Sure, Samsung is trying to convince business that its phones are good for business use. And they are with the DeX Pad. Its Knox Security is superb. As the only phone with a dock, it is a viable alternative to BlackBerry Key2 and iPhone.

No, it is not a desktop replacement although using Microsoft Office and One Drive could get you close to that. It is great in a hotel room viewing movies on a larger HDMI TV.