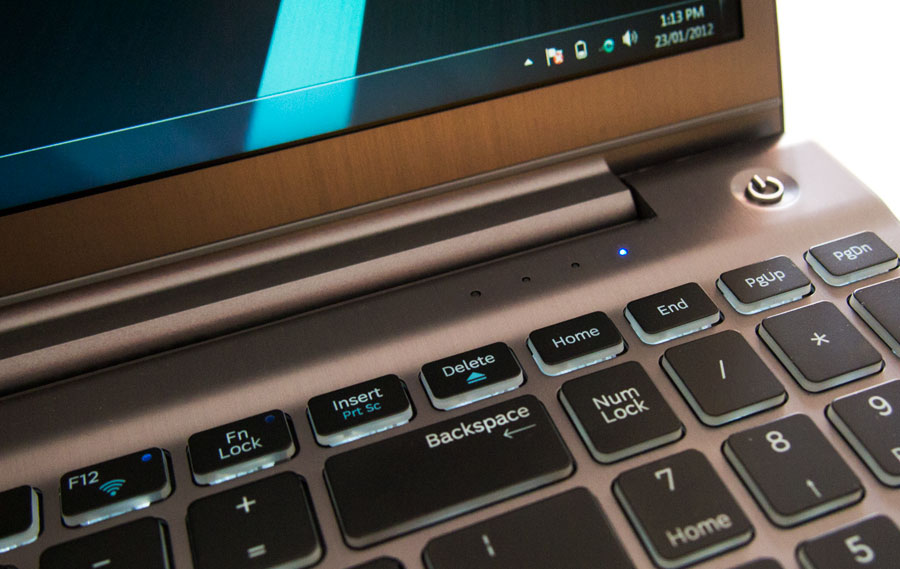 When you need a full-strength laptop packed with power and style, Samsung’s Chronos 7 may be just the ticket – a notebook that feels smaller and more powerful than a typical 15-incher.

Unlike the stripped-down, thin, light notebooks coming to market now, the Samsung Chronos contains power, size, graphics, and even an optical drive.

A second-generation 2.4GHz Intel Core i5 processor – reasonably fast, though not the fastest  – drives all operations, plus there’s 4GB RAM and a mid-range AMD Radeon 6750M dedicated graphics chipset with its own 1GB memory. Intel’s own graphics chipset is also included, and depending on the needs of the application being used, the Chronos is able to switch between the two.

There’s a lot of space here too, with 750GB of storage divided between two partitions. There’s also an 8GB solid state drive that, although not accessible by the user, helps speed up operations through the use of Samsung’s “Express Cache,” a technology that caches frequently-used files to speed up boot time and running programs.

Optical media is catered for as well, with Samsung eschewing the more common tray-based drives for a DVD-RW slot-loading unit.

Then there’s the screen: a 15.6 inch LED-edge lit matte LCD screen with a resolution of 1600 x 900 pixels. Slightly above the screen is a 1.3 megapixel webcam, useful for video conferencing. A microphone is also included, and this is found on the palm rest near the keyboard on the left side.

Connectivity is strong with this laptop, with three USB ports, two of which are the new USB 3.0 variety (backwards compatible with USB 2.0). You’ll be able to connect the Chronos up to different displays, thanks to the inclusion of a full-sized HDMI and mini-VGA out with an included dongle.

Networking options here include a wired Gigabit port, 802.11 a/b/g/n WiFi, and Bluetooth 3, while multimedia is catered for in the form of a combined headphone-microphone 3.5mm jack, and an SD card slot.

A Kensington Lock is also included.

Cosmetically, the Chronos 7 is fairly minimalist: the lid is presented in a brushed metal look that continues throughout the body of the notebook. There’s lot of grey here, with the only accent found in the black of the island-style keyboard.

The keyboard occupies the entire width of the notebook’s chassis – bar a few millimeters at the left and right edges – with the inclusion of a numeric keypad accounting for the keyboard’s extra-large footprint.

Directly below the keyboard is a large 12.7cm (5 inch) diagonal trackpad, with one giant button and multi-touch features. Backlighting is provided, making the keyboard easy to use in darkened environments.