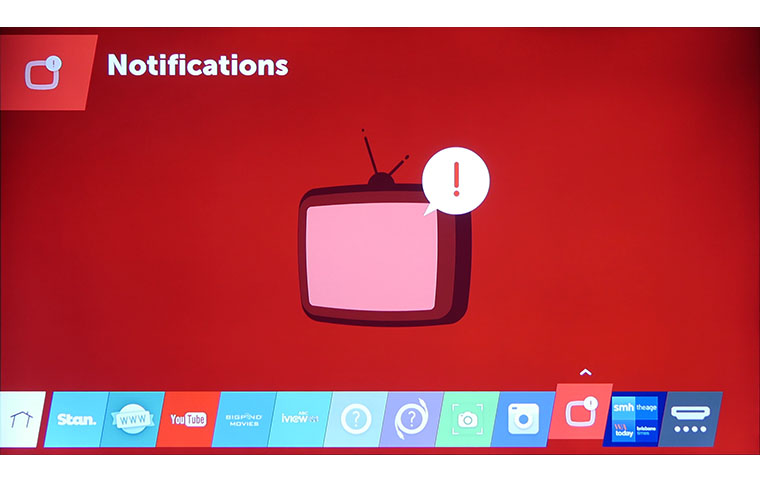 My main TV in the office is a 2014 model LG Smart TV running webOS. There was always a little oddity about it that had me puzzled: a “notifications” section which never seemed to have anything in it. Last evening I switched on the TV after quite a break, and it informed that there was a new notification. So I had a look, and found some rather interesting information.

First, Skype. “Skype Service Close on LG Smart TV” the notification is headlined. It turns out that Skype will not be supported on LG Smart TVs from December 2016. Back in June, says the notification, Skype “closed its technical support for Smart TV applications” and “In the future, the Skype service will be removed from all TVs by Skype’s policy”. Ah, so it’s not just LG TVs.

So there you go. I hope you don’t rely on your smart TV for Skype. It’s not much of a surprise. Most brands of TV stopped putting cameras on their premium model TVs a couple of years ago, and while some offered USB webcams as optional extras, even those were hard to come by. I guess it turns out that people preferred to use their computers, phones and tablets for their Skype communications.

As I scrolled down through the notifications I found an earlier one, foreshadowing the change, which contains an explanation:

Over the years, users have changed the way they use Skype, with the majority accessing it from a mobile device – including when in the living room. Skype wants to prioritize delivering the best possible experience to the platform users are asking for, which is why Skype had decided to focus efforts in other areas while supporting key functionality on Skype for TV for as long as possible.

That’s not the only notification. Another one is called “Bigpond TV – End of Life”. So, Bigpond TV has also said that it is “closing … on Smart TV platforms”. It was “unpublished on LG WebOS devices from September 18th.” This is not Bigpond Movies, which is still there.

Are we starting to see a pattern here? The shedding of rarely used functions?

Whoah, I should have been paying more attention! Scrolling down further, there are service termination and shutdown notices for Picassa, Twitter, the Disney Category in the LG 3D store, followed later by the whole LG 3D store, the Kids Land service, LG Cloud TV app service and the Facebook (that one happened way back in April 2015).

I remember way all the way back to four or five years ago when TVs were rolling out social media apps, some able to operate side-by-side with the TV picture. Their makers were reckoning Australians were going to be tweeting and facebooking about the shows they were watching by means of their TVs.

But as the dust has settled, what remains shows what people do value in their smart TVs. Oddly enough, it’s mostly TV-like things. That is, streaming services. Netflix, Stan, various free to air catchup services. I guess Bigpond TV – the content created specially for it – wasn’t used enough to justify its continuation. Many have competent network media players built in as well, useful for watching stored movies, playing music and displaying photos.

But odd things remain. Web browsers, for instance. Do many people use their TV as a browser?