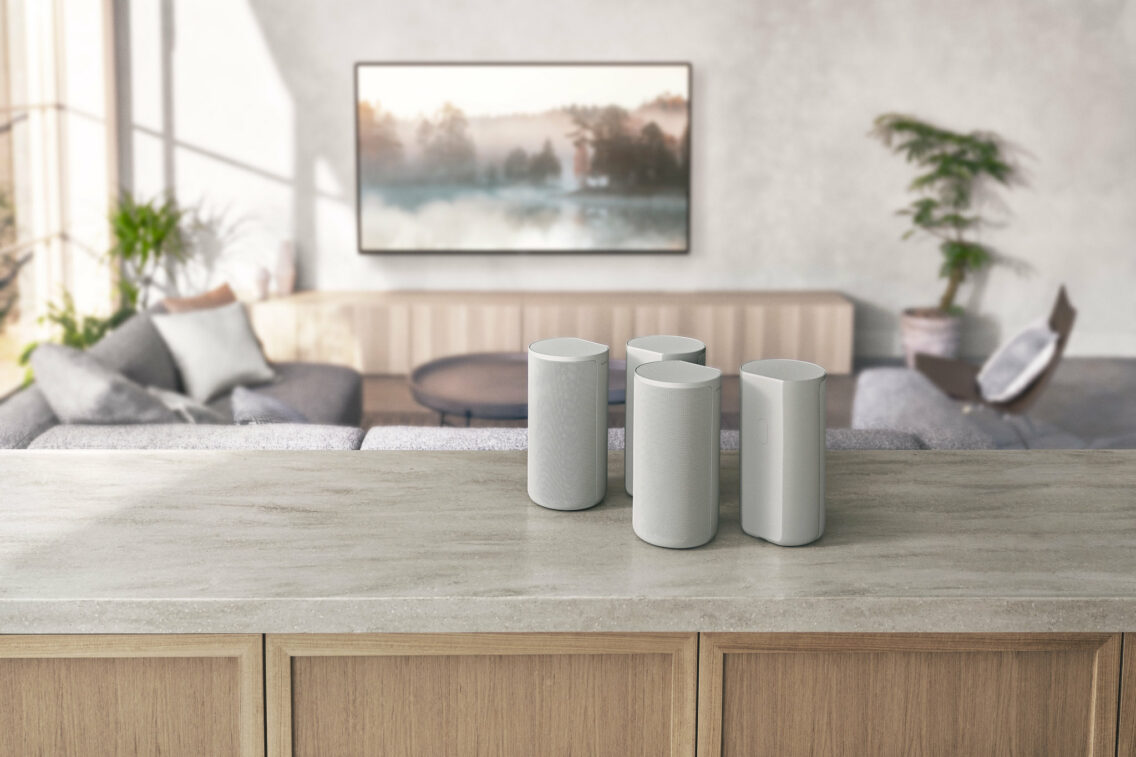 Soundbars have been the go-to for turning your living room into a home cinema without the clutter of a fully featured surround sound system. While there are a few great options out there, such as the Sonos Arc and Samsung’s Q950A, very few have come close to replicating that enveloping dome of sound you get from the full fat sound system.

Cue the HT-A9 from Sony, which not only delivers all the scale and dynamics you get from a dedicated 7.1.4 system, it does so with only four small wireless speakers that can be placed just about anywhere. But before we get any further into the performance, let’s take a look at what you get in the box and how it works.

Each of the four speakers are around 30cm in height and half the depth of a typical bookshelf unit. The rear surface of the speaker is also flat so it can fit against a wall. The pearl grey coloured grilles and compact design make it easier to blend them in to the decor of any living room, however, you will need to position them near an outlet as they all require mains power to operate.

All four speakers connect wirelessly to an Apple TV-style control box, which sports an HDMI 2.1 input. This can link to compatible devices like games consoles, and there’s an HDMI output for connecting to a TV’s eARC port.

The HT-A9 is effectively a 4.0.4 physical speaker system as there’s no centre speaker or subwoofer included, though you can buy the latter separately (more on that later). Each speaker consists of an upward firing driver for bouncing sound off the ceiling and back down to your ears. There’s also a front firing driver and a tweeter per unit.

Configuring the HT-A9 is straightforward and quick thanks to the easy to follow menu system. This steps you through a minute-long auto calibration process to map out the dimensions of the room. Unlike conventional soundbars and AVRs (audio video receivers) where you get a solitary mic for calibration, the HT-A9 uses the dual microphones built into each speaker to determine the distance between them. It also measures characteristics of the listening space such as the height of the ceiling. The system then creates its own virtual dome of sound using Sony’s 360 Spatial Sound Mapping.

This means that through a combination of psychoacoustics, digital signal processing and sound optimisation, the HT-A9 forms new directional wavefronts from up to 12 positions around the room into something that resembles a 7.1.4 system. Sony calls them ‘phantom’ speakers, but the company is essentially filling in the physical speaker gap through virtualisation with the goal of encircling the room in immersive spatial sound.

Unlike other virtualisation techniques that sound artificial and far from convincing, the HT-A9 actually delivers on the promise. It really does sound like you have 12 physical speakers carefully positioned throughout the listening space with objects smoothly panning around and above you. The fantastic soundstage performance is akin to a well-tuned 7.1.4 system and blows away traditional soundbars which typically sound front heavy and boxed in.

I set up the HT-A9 in my media room to test the performance with my dedicated 7.1.4 system. This consists of a pair of Klipsch tower speakers for the fronts and mounted bookshelf speakers for the rear, and surround speakers as well as four in-ceiling units. While running the HT-A9 in an enclosed smaller room wasn’t quite as impressive as in my open living room space, I was amazed at how close it matched the room-filling output of my larger and more expensive dedicated system.

The overhead audio effect wasn’t as defined as my four in-ceiling speakers, but the HT-A9 still did an outstanding job in delivering an immersive spatial audio experience.

The sheer resolution and detail retrieval of the HT-A9 was a standout. Firing up reference material such as the 4K Blu-ray of The Matrix, visual effects were given greater aural weight with punctuating gunshots that sound like they’re just missing you.

Switching over to gaming with Returnal on the PS5, I was immediately taken aback at how much clearer the sound of raindrops bouncing off Selene’s space suit in the opening level sounded on the HT-A9. Similarly, the sound effect of the Kerberon enemy’s tentacles swooping through the alien environment was really brought to the fore. These little nuances were entirely missed on my dedicated 7.1.4 system.

Without a physical centre speaker, Sony relies on its phantom speaker tech to deliver dialogue and, once again, it sounded clear and intelligible throughout. In many ways the centre fill sounded better, as it was less directional and more dispersed than what you would normally get with a dedicated centre channel.

Sony does give you the option to use its televisions as a discrete centre channel. This is called ‘Acoustic Center Sync’, and uses the included speaker mode cable. I tested this feature with a Bravia A80J and it sounded woefully unbalanced and dropped the overall sound quality. If you own a Bravia television, particularly an A90J that packs a more powerful inbuilt speaker system, I would recommend comparing the sound during setup.

Another area where the HT-A9 outshone my 7.1.4 system and every other soundbar for that matter was with music. Home theatre systems rarely sound great with music, which is why I default to using stereo output when playing tracks.

However, the HT-A9 was equally adept at handling two channel tracks as well as 360 Audio supported music through streaming services like Tidal. Although the HT-A9 lacks any EQ adjustment other than some included presets, the level of clarity and spacious soundstage meant that I was always enjoying what I was hearing. Audiophiles shouldn’t expect a neutral sound signature, with Sony favouring accentuated highs, leaner mids and punchy bass, but it does make music tracks lively and completely engaging at all volumes.

Less convincing was the HT-A9’s attempt to replicate a ‘phantom’ subwoofer which sounded anaemic at best, making the ‘optional’ wireless subwoofer that Sony sells separately a mandatory purchase. My review unit included the larger 300W $999 SW5 sub which sounded tight and articulate throughout and delivered all the low end oomph needed to drive the HT-A9. Sony also sells a smaller 200W SW3 sub for $699.

Another key selling point of the HT-A9 is that, unlike traditional home theatre speakers and soundbars, you can put the speakers just about anywhere. This means you don’t need to worry about having the speakers orientated at the same height and distance from each other.

I used a tall bookshelf for the left rear speaker, the rear right rested on a side table behind the couch, while the front left was on a media cabinet below the television and the front right speaker was on a coffee table closer to the ground. To my surprise, I didn’t notice any dropoff in audio quality when compared to having them in their ideal speaker positions (so long as the speakers weren’t being blocked behind another piece of furniture). Just keep in mind that you will need to run through the calibration process every time you move any of the speakers.

The HT-A9 relies on a high bandwidth wireless transmission to communicate with all four speakers and the sub, and as such, it is more susceptible to interference than other speaker setups. I didn’t encounter any dropouts when testing the HT-A9 in my media room, which also houses a wireless router. However, I did notice some of the speakers disconnecting from time to time when testing it in the lounge room alongside my active Samsung Q950A soundbar, which also uses wireless rear speakers. Turning off the Q950A from the power outlet resolved the issue but it’s something worth keeping in mind, particularly if you have a lot of wireless devices in your main listening space.

Sony’s HT-A9 has no right to sound as good as it does. With just four small wireless speakers that take up less space than traditional bookshelf units, and the not so optional wireless subwoofer, the HT-A9 outperforms every other soundbar on the market. It also rivals the performance bar set by a well tuned 7.1.4 dedicated system.

I still prefer the flexibility of being able to upgrade and improve your system over time that you get with separates (dedicated speakers with an AVR/processor), but for anyone that might be considering a soundbar for the living room where space and convenience are key, it’s hard to go past the HT-A9.

Sony HT-A9
Sony’s wireless HT-A9 setup uses psychoacoustics to create a dome of sound with a dozen “phantom” speakers with surprisingly convincing results.
Features
9
Value for money
8
Performance
9.8
Ease of use
10
Design
9.5
Positives
Delivers a level of immersive sound that other soundbars can't
Flexibility in speaker placement
Easy to setup and use
Speakers take up very little space
Living room friendly design blends in with most decours
Sounds just as good with music as it does with movies and games
Negatives
Wireless interference might be an issue for some rooms
Wireless sub should really be included with the package
All four speakers require a power outlet
9.3