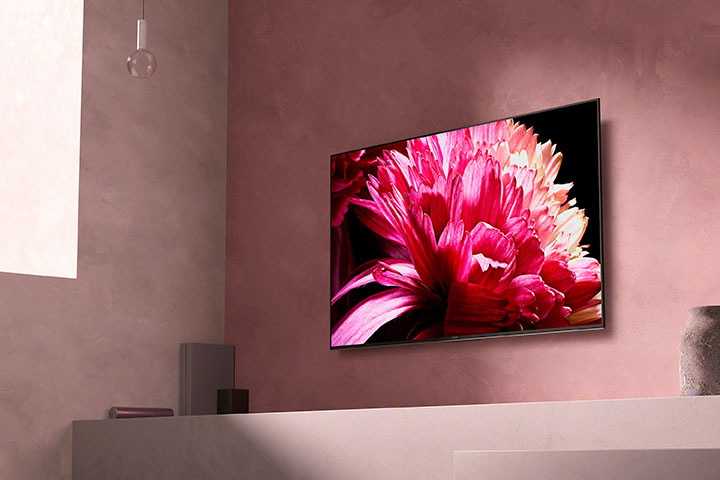 Sony has launched its premium mainstream TV range, tagged X9500G. Rather than sending TVs to various reviewers, Sony brought reviewers to the plush QT Hotel in Sydney to spend a night with the TV, so to speak. The one with which I shared a room was the Sony KD-55X9500G.

As the model number suggests, the Sony KD-55X9500G is a 55-inch TV with UltraHD – 3,840 by 2,160 pixel – resolution. But what did I mean about “premium mainstream”? Well, this TV incorporates all of Sony’s latest tech, but uses an LCD panel with LED backlighting. Its fully premium models are OLED. No doubt we’ll look at what’s latest on that front in the future. Meanwhile, LCD/LED provides an excellent picture at a reasonable price. This one is $2,699.

As with the lower model, this TV also supports the Dolby Vision, Hybrid Log Gamma and HDR10 picture standards.

You get voice search because for some years Sony smart TVs have used Android as their operating system. And that means it includes Google Assistant. On the lesser model, you talk by pressing a button on the remote. And you do that also on the Sony KD-55X9500G. But the body of the TV also has a built-in microphone, so you can just talk at it – “Hey Google” or “Okay Google” – as you would with a Google Home device.

I can’t say I used this feature exhaustively, but I did get a sense of how it worked in effect. First, Google’s voice recognition engine is probably the best there is. The TV was remarkably accurate at showing my words on the screen. Second, it was relatively slow. My Android phone was in the room, and since the TV wasn’t linked to my Google account, both the TV and phone answered my requests. The phone was giving me answers before the TV had resolved the words. Third, there were some things that either the TV wouldn’t do, or I couldn’t find the right words to invoke. I could switch it to HDMI 2 with words, or increase the playback volume, but it would not bring up, say, the picture settings menu or return to the home screen. The combinations of words I could think of just resulted in Google searches for videos relevant to those words.

Not that controlling the TV’s own functions by voice is a particularly useful thing. It’s usually far easier just to tap a button on the remote. Especially with this TV, because the remote control isn’t an infrared model. It connects via Bluetooth, so you don’t have to do such old-fashioned things as pointing the remote at the TV.

And even though the Sony KD-55X9500G TV’s Google Assistant functionality might be slower than that of a phone powered by a Qualcomm Snapdragon 845 processor, it was no slouch as TVs went. It switched between screens and functions snappily. The latest iteration of Android TV layout is a marked improvement over previous versions. It was intuitive and also highly controllable.

Pretty much any streaming service you can think of is available on this TV (assuming you have a subscription). I watched content from Netflix, from Stan and from Google Play Movies. The connection speed in the hotel room was between 11 and 21mbps, and picture quality was excellent.

The remote has dedicated “Google Play” and “Netflix” keys.

Broadcast TV? I can’t offer a valid opinion because the TV wasn’t plugged into a broadcast antenna, it being in a hotel room. But I would note two things. First, Sony TVs aren’t known for having any difficult with the core task of delivering broadcast TV. And all the catchup apps were loaded onto the TV so I could watch much of the same stuff streamed, rather than sent over the air.

As for the Netflix Calibrated Mode, apparently Netflix sends metadata along with the signal. I didn’t know this until informed by Sony. Switching this mode on (in picture settings) when you’re watching Netflix lets the TV make use of it.

Netflix streams at 60 frames per second, but since a lot of stuff – almost all movies, for example, and many TV shows – are shot at 24fps, they tend to look a little jerky in their motion. Much of this is disguised by motion smoothing. Still, amongst other things the Netflix Calibrated Mode can pick and choose amongst the transmitted frames and display only the original 24 frames in each second. That’s something I’ve seen on some high-end Blu-ray and DVD players for playing back US-format DVDs.

I gave it a try out on “Riverdale”, a Netflix Original I picked out pretty much at random. I can’t say I noticed any increase in motion smoothness. Indeed, I preferred the default Sony picture, which was a little more intense in colour and contrast. But it’s good to have the option there for enthusiasts. Chances are that the slightly reduced colour and contrast intensity are more accurate.

The standard LCD TV these days uses edge lighting. LCDs work by controlling at the pixel level the passage of light from a backlight. Originally the backlight was one fixed panel behind the LCD. When edge lighting was later introduced, it was often represented as some kind of image enhancement. In fact, it was simply a way of making the TV panel thinner. The mirrors used to spread the light were thinner than the lights.

OLED TVs don’t need that because they can go fully black at the pixel level. So, in effect, they have more than 8 million individually lit cells. With full array local dimming, the question becomes: “How many?” The more elements in the array, the more localised the dimming.

Earlier in the day, during a product demo, I asked the Sony representative how many elements there were in the array for this TV. He declined to say, suggesting that this is a kind of misleading figure since there are other important aspects of an array’s performance, such as the calibration of the brightness control. That’s true, but there are lots of figures specifying home entertainment equipment which are, taken naively, quite misleading. For example, just about every time the output power of some audio device is mentioned.

That evening, in the hotel room with the Sony KD-55X8500G TV, I paid close attention to the panel during the credits of a couple of movies. Credits typically used white text on a black background. On this 55-inch panel, I’d estimate an array grid of five across by four up and down. That is, twenty zones of backlighting.

That’s much better than nothing. But far from leading the field.

Nonetheless, watching regular program content, some of which contained some quite dark scenes, the black levels were generally quite satisfying, and it was rare for backlight  break-through to be noticeable.

Streaming is one thing. But do you use a PVR? A DVD player? A Blu-ray player? The Sony KD-55X8500G has a several HDMI inputs. I brought with me an UltraHD Blu-ray player and a few select discs to make sure I could test the TV with known material.

Unfortunately, that proved to be a disaster. Not because of the TV, but because my trusty UHD player seemed to suffer some invisible damage in the Qantas airplane. It looked fine on the outside. It switched on normally. Everything seemed to work. But it would no longer recognise any of my discs.

So rather than using certain movie scenes I’ve isolated which make clear particular aspects of picture performance, I’ve had to rely on general viewing of streaming material, plus some digital test patterns on USB. (This hotel reviewing thing definitely has drawbacks in comparison to having the thing to be tested in my office!)

As best as I could judge, the motion processing of the Sony KD-55X9500G TV was as good as it gets. In several hours of viewing, not once did the artefacts and distortions I look for appear. That speaks very well of the picture processor, since I’m quite particular on this front.

My UltraHD test patterns confirmed that with video content the TV was able to display full colour resolution – 3,840 by 2,160 pixels in each colour – with video. However, rather than offering up 4:4:4 colour with still photos, it fell back to 4:4:0. You probably won’t see the difference with real photos, but I can never understand why some TVs are more capable with colour handling from video than they are with stills.

The grey scale ramp showed good clean graduations between the levels, with no crushing of either blacks or whites.

I wouldn’t call the Sony KD-55X8500G TV a revolutionary improvement of what Sony has previously produced. But it is a very solid, very usable and very pleasing TV and a price that would have been unbelievable a few years ago.