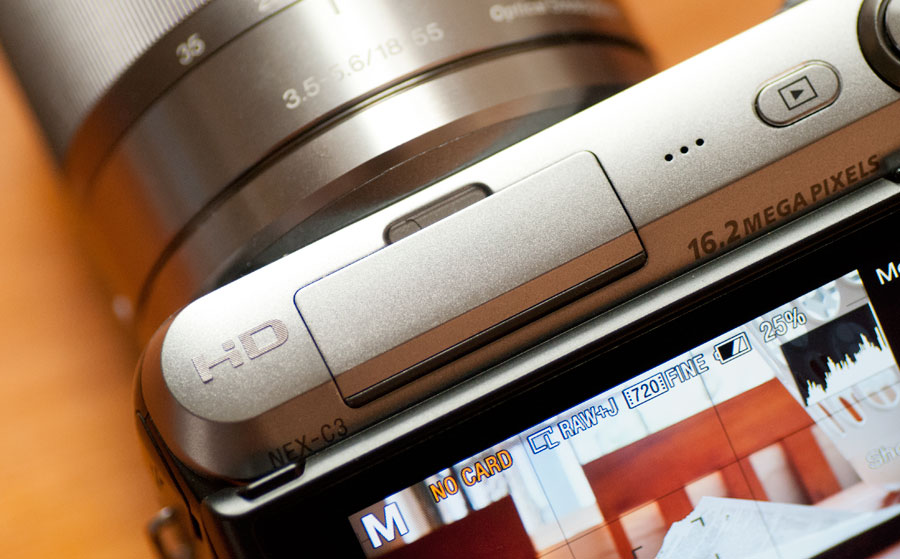 With a tilting screen, arty effects and DSLR-sized sensor, the Sony NEX C3 is an excellent and versatile walk-around mirror-less interchangeable compact camera.

Sony’s NEX C3 is different from Sony’s larger digital SLR bodies, taking advantage of the smaller E Mount. Lenses have been available for this system since the first breed of NEX cameras were released in 2010.

Inside the camera, Sony has installed a 16.2 megapixel APS-C sensor. This sensor class is the same sized sensor as that appears in many DSLR cameras, including models made by Nikon, Canon, Sony, and even the Samsung NX range of cameras.

A bigger sensor can lead to better image quality, regardless of how many megapixels it supports, usually because the larger sensor captures higher quality and produce less ISO noise. With a 16.2 megapixel sensor measuring 23.5×15.6mm – similar dimensions to the sensors found in Nikon digital SLR cameras – the NEX C3 is, on paper, already a good shooter.

The specs continue with an ISO range sitting at 100 to 12,800, support for RAW, video capture at 720p HD, creative filter modes, and manual camera modes for those who like to have a little bit more control.

A 3 inch tilting LCD screen can be found on the rear of the camera; it can be angled up and down, or positioned to sit flush with the body.

Several buttons sit on the back, including two buttons that change function based on the mode at the time, a scroll wheel with built-in a directional pad underneath, and a centre button. The top of the camera features a playback button, on and off switch surrounding the shutter, and a movie record button.

Ports are abundant on this camera, with all covered up by little plastic doors. You’ll find a mini-USB, and mini-HDMI port, as well as separate compartments on the bottom for the battery and SD card slot.

There’s no built-in flash on the C3, although an external unit with a screw mount is packaged in the box, able to be attached to the top of the camera. Also in the box are instruction manuals, software CD, battery, battery charger, power plug, lens hood, USB cable, and neck strap.