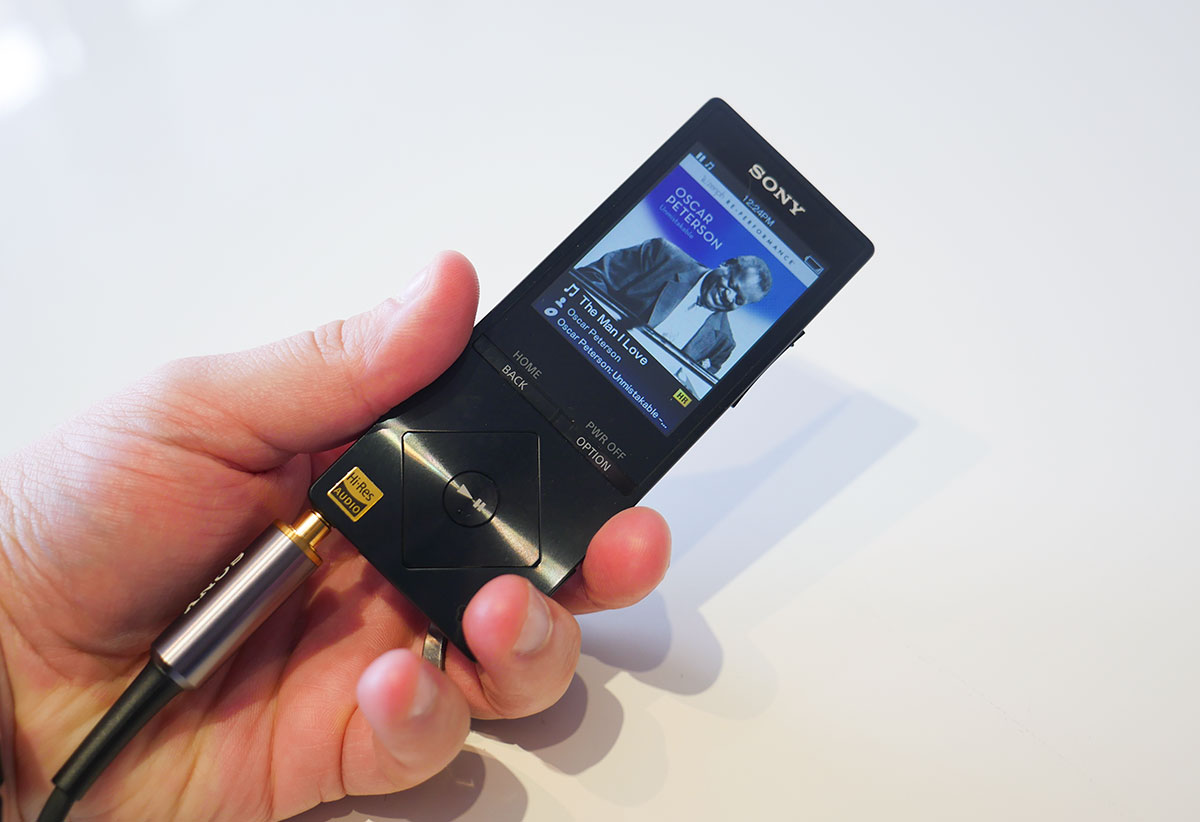 Smartphones may well be taking over the world, but not everyone wants one for dedicated music playback, and if you’re just getting into the joys of high-resolution audio, Sony’s new tiny media player may be just what the headphone doctor ordered.

Phones may well be killing the MP3 player, but there are plenty of people who don’t want the two connected, and might even find a reason to use one over the other. These days, smartphones can work as media players, but you don’t always get an impressive battery life or file format support, and so it makes sense for some people to separate.

Sony’s NWZ-A15 seems built for people with this way of thinking, with the unit being a small media player with a 2.2 inch display, headphone jack, support for Bluetooth, and an upgradeable storage amount that can take your MP3s, AACs, WMAs (people still use these?), and even some of that lossless goodness that is FLAC.

Sony’s A15 Walkman includes a few proprietary technologies, such as the “S-Master HX” technology, which is a tiny digital amplifier made to recreate a wide frequency response while minimising distortion, as well as a version of Sony’s “Digital Sound Enhancement Engine” which aims to bring tracks of the regular 16-bit resolution up to the 24-bit quality people expect out of high-resolution audio.

This unit is the size of a small older phone and much thinner, with a thickness of 8.7mm and a weight of 66 grams, making it a fairly light gadget, with only a couple of ports available here in the form of a 3.5mm headset jack for headphones or speakers and the connection for charging and data transfer.

You’ll find 16GB of storage built inside this unit, as well as microSD to expand that memory when you need it, because if you listen to a lot of music, 16GB isn’t enough, and microSDs are easy to find.

Checking out the design, and Sony isn’t exactly reinventing the media player wheel here, though it is skipping the jog- and click-wheels used by other media players for a diamond directional pad with a pause and playback button in the middle. This is a simple design that coordinates with a simple screen, and one that isn’t touch.

You read that right: the 2.2 inch display on the Sony NWZ-A15 is not a touchscreen, moving away from the typically touch-focused world of today and over to a directional pad that allows you to traverse a grid system that feels old, and yet still works fairly well.

It’s not as simple as touching the right icon to get in — you’ll have to press a direction a few times and then press the centre button to act on it — but it’s still easy, and you have clearly labeled “back” and “option” buttons to work with, which also work as “home” and “power off” when you hold them down for over a second.

On this menu, you’ll find music playback, the ability to read photos, watch videos on the very small screen, tune in to FM radio, look at playlists (though these need to be made on a computer), listen to podcasts, turn on Bluetooth, and see a few settings menus, as well as let Sony peek through your track list and create “SenseMe” channels which provide songs for a mood or emotion you’re feeling, even showing lyrics for some tracks.

Most people, though, will likely just load up some music using their computer, connecting the A15 using the supplied USB cable or throwing music in using a microSD card, listening this way.

Once you start doing this, you recall what it was like to use an old school media player, though with a few more options along the side. We’re particularly impressed with the ability to play back FLAC files, supporting 24-bit audio on the go, which is something only a few Android phones can presently do.

If you don’t have FLAC files, you can load the A15 up with the same MP3 and AAC files you’ve been using on other players, with Sony’s Digital Sound Enhancement Engine (DSEE) able to up-sample the quality of an older file to sound more like it’s a high-res audio source. We tested one and couldn’t really notice the difference, perhaps with a little more spatial difference in the up-sampled edition, though marginal at best.

That said, DSEE didn’t appear to do anything that would cause an issue, so we’d probably have no problem leaving this on if we needed to.

Beyond the MP3 playback, though, there are some serious positives to this pint-sized Walkman, one of which is the amount of volume on offer, with 30 points of volume, and enough to drive some seriously large headphones.

As a point, Sony send us some of its massive $800 MDR-Z7 headphones to test it with, and there was more than enough volume to drive these, with just enough for the Audeze LCD-2, a pair that generally only likes a headphone amp for music to be loud.

That is a tremendous effort from a tiny player, and we found oodles of sound pushed out when running both 16 and 24-bit FLAC files through the player, which is something phones supporting the high-res audio formats just couldn’t manage.

Recreation also sounded very good too, and while we’re still building a solid high-resolution audio playlist, our test panel of tracks from Miles Davis, Dave Brubeck, Muse, and Imogen Heap showed that this media player could handle high-resolution tracks just as well as the computers we normally ran the tracks from, usually with a headphone amp or high-end sound card in between to drive the headphones.

High resolution audio does come with the pitfall of requiring a lot of space — a 24-bit 192kHz 50 minute album can be around 1GB in size — and so while the 16GB space provided is likely going to be enough for most users, we’re delighted to see that Sony has included a microSD slot, meaning you can expand on what’s provided.

The battery is also pretty solid here, and Sony’s claims of around 50 hours of MP3 playback and 30 hours of high-res FLAC playback appear to be on the money, at least with the FLAC support. We tested for several days and found standby time was pretty solid across this, with a good 20 to 25 hours possible when we were listening to high-resolution tracks.

One thing we’re highly critical of on the Sony NWZ-A15, though, is the use of a proprietary port at the bottom.

Yes, this is another of Sony’s many attempts at a proprietary port, with a flat charge and data transfer port that feels like a smaller iPod dock connector, and yet isn’t. It’s not compatible with microUSB, even we really don’t know why Sony didn’t just go with the tried and true connector that can be seen on nearly every type of mobile gadget out there, barring the ones made by Apple.

There’s also no WiFi, which we’d have like to have seen, even if it would have made a dent on the battery. An option for it would have been neat, and might even have opened the NWZ-A15 to support for various wireless music services, such as Spotify, Rdio, and Google Play Music, all of which is missing here.

You do get native support for podcasts if you want them, and you can play back video on the tiny 2.2 inch screen if you want, though we wouldn’t, because your phone is likely a bigger and better bet than this minuscule display.

The display is also prone to easy scratches, so it would be nice to see some of Sony’s mineral strengthened glass in the next iteration if possible.

And finally, there’s the Sony “SenseMe” emotion-based music channels, which checks your music for qualities to make it fit in with an emotion or time of day like “relax” or “morning”.

We like the idea, we do, but even though you can jump between stations that feel like they’re already playing, the moment you select one and try to go somewhere else, say back to the home screen to look at photos or even on the playback menu to change the EQ, the station ends and your music stops.

This seems silly, since you’re listening to music, but we’ll have to wait for Sony to patch this via firmware.

Not everyone needs a smartphone, that much is clear, and if you like listening to music but that don’t necessarily need that feature rolled up with a smartphone, Sony’s NWZ-A15 offers a solid amount of playback options for people who regard audio quality with the highest degree.

What we’re pleased to see about this media player is that it supports more than your basic MP3s, because while most people rely on compressed media, the fact that this wee Walkman can handle high-res audio like a champion puts a huge smile on our faces, the ones held in place by very large earphones that require more power than most smartphones can offer, even those that also play FLAC files in 24-bit.

If that’s you, then it’s likely you’ll be interested to see what Sony’s tiny Walkman can offer, especially since it sits far below Sony’s other high-res friendly Walkman, but if you need more apps and a bigger screen, move along, because you won’t find much of that to work with here.