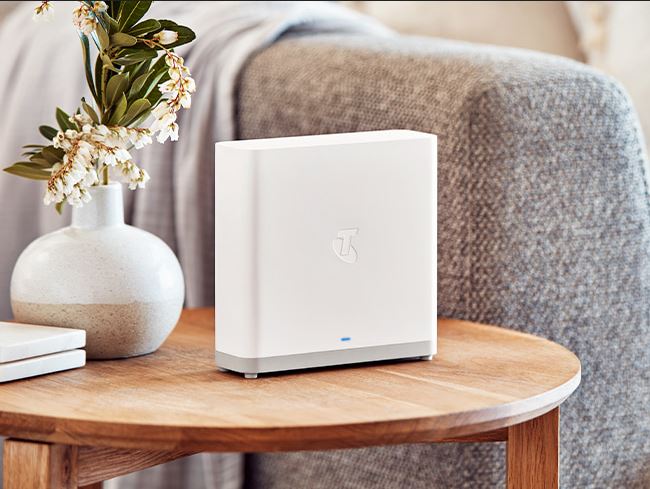 Features
8
Value for money
7.6
Performance
8
Ease of Use
10
Design
7.6
Positives
Absolutley easy to set up
Telstra guarantee for more units if you need them
Telstra is serious about helpiong to solve Wi-Fi blackspots for its clients
Can use it either with a 5Ghz Wi-Fi backhaul or Ethernet 1Gbps
Negatives
Telstra only solution
Not a solution for power users
8.2

The most often asked question is “How do I improve Wi-Fi black spot coverage in my home”? This review is about the Telstra Smart Wi-Fi Booster Gen 2, and it is only for Telstra Customers with the Gen 1.1 or 2 NBN Gateway modem/router.

Now as much as I have a love/hate relationship with Telstra, I am a Telstra NBN FTTN customer, and I have a Gen 2 modem gateway. Our reviews are 100% independent and fair – you cannot buy coverage – so let’s put that baggage aside and give it a good test.

Read this before you read further

A reminder that you need to be a Telstra NBN customer with a Telstra Gen 1.1 Arcadian or Gen 2 Technicolour modem/gateway with 4G fail-over.

These modems are Wi-Fi 5 AC dual-band with four Ethernet ports and a phone port. The overall speed is AC2600 (2.4Ghz/300Mbps and 5Ghz/2300Mbps), so it is not for heavy-duty use or more than about ten connected devices. The Wi-Fi aerial signal strength is accordingly lower, and you are flat our getting a strong enough 2.4Ghz/5Ghz signal at 20/10 metres line of sight.

You have two options to get a better signal further away. Both options include leaving the Telstra gateway in situ and connecting 1) a more powerful router or 2) a range extender like the Telstra Smart Wi-Fi Booster Gen 2.

But remember that the Gateway may also be a limitation in terms of processing power to share that valuable internet bandwidth. See our caveat later.

What is a Telstra Smart Wi-Fi Booster Gen 2?

It is a Wi-Fi extender. It receives both the 2.4Ghz and 5Ghz signal from the Telstra Gateway and retransmits that signal. The extender then adopts the single Telstra SSID so you can roam around the home and not have to log into other hotspots.

As much as I had hoped that seeing one would reveal all, it has not. Reading the box, it states

Booster – FAIL – I think not

I take issue with the term ‘Booster’. By law, you cannot amplify/boost any RF signal like 2.4Ghz or 5Ghz Wi-Fi. The Government sets Wi-Fi power limits so as not to annoy the neighbours!

At best it can transmit up to 100/30 meters unobstructed line-of-sight and about 30/10m inside a house. Every time it passes through a wall, door, cupboard or floor, the signal strength reduces by approx. 50%.

It takes the available signal strength (bandwidth) from the main router and retransmits that signal over its Wi-Fi. Remember the term Garbage-in/Garbage out (GIGO).

It cannot boost the signal strength. If the main router signal is, say 50%, then the Extender retransmits that 50% over its Wi-Fi. But there is a catch. Wi-Fi is half-duplex. So that 50% is really only 25% and by the time you get it in a dead spot it may be far less.

But all the Telstra Smart Wi-Fi Booster Gen 2 needs to do is give you internet connectivity at ‘somewhere’ up to a maximum of your NBN plan speeds. If correctly placed, it does that very well.

So, the Telstra Smart Wi-Fi Booster Gen 2 is a dual-band Wi-Fi extender that uses part of the signal from the Telstra Gateway.

Telstra is very cleverly marketing this with a Telstra Guarantee that will provide up to three extra boosters for wall-to-wall Wi-Fi coverage. Note that means coverage – not necessarily speeds and the ability to support more things.

If that does not work, then you can get your money back after returning the devices.

99% of the issues with home Wi-Fi relate to the original gateway modem/router placement. For example, NBN usually places the home termination box at the point closest to the road and the pit. That may be your garage, ground floor etc. – well away from 10-30 metre radius that Wi-Fi can transmit.

So, before you do anything, the best place to put your original gateway router is dead centre of a 10-15 metre diameter circle where most of the Wi-F devices are. The more devices you can connect via Ethernet to your router, the better. We have an article on Mesh router placement here but moving it involves getting Ethernet cable to the best position (either install a cable or use Ethernet over Power adapters).

The best place to put an extender is about halfway line-of-sight between your router and the dead zone. If you cannot do line-of-sight and then keep the Extender to within about 5-10 metres (no more than two rooms away) or the signal it receives may be too low to be useful (GIGO). You also need 240V power.

The front light will glow Blue if paired and working or Amber if the signal is not strong enough. If it shows a red light – it has not paired.

* It is best to let the Gateway and Extender manage 2.4Ghz or 5Ghz connections under one SSID.

Wi-Fi signals higher than -60dBm are practically useless. This shows the Gateway does not have as strong an antenna signal as the ASUS ROG Rapture AX1000 tri-band, but then it is a brute of a router with eight antennas.

Regardless the ASUS simply cannot penetrate the blackspot whereas the Telstra extender can as it is in the next room. That is a big PASS.

BUT, the figures above only show the speed from the Samsung to the Extender (or gateway/router) and not throughput.

For that, we need to go to the Telstra Gateway diagnostics page.

It reveals that the Extender is retransmitting a 2.4/5Ghz 65/72Mbps signal. That is enough to get 50/25Mbps or more NBN speeds.

Remember that to initially set it up you had to connect an Ethernet cable between it and the Gateway?

Well, you can run it as an access point with the same SSID if you can get an Ethernet cable to the place you want to locate the Extender. What that means is that instead of using a 5Ghz W-Fi backhaul (in this case 72Mbps) you have a 1000Mbps full-duplex Ethernet to play with. That would be perfect for placing an extender on another floor or further away than it can get a signal from the Gateway.

We used a $269.95 pair of D-Link Powerline AV2 2000Mbps (1Gbps full-duplex) Ethernet-over-Power extenders (you could use any brand of Powerlines or the cheaper 500Mbps versions as well) and we were able to stream 4K Netflix where we previously had no Wi-Fi signal.

I mentioned earlier that the Telstra Technicolour Gateway is AC2600 dual-band (as is the Extender). Frankly, it lacks the horsepower to effectively handle more than a dozen or so Wi-Fi or Ethernet-connected devices.

The first trick with this Gateway is to move all the bandwidth-hungry devices to Ethernet connections instead of Wi-Fi. It has four Ethernet ports, and you can attach a separate Gigabit Ethernet hub/switch to one of those.

But if you are like me with 40+ devices including smart lights, security cameras, video doorbells, smart locks, smart speakers, laptops, smartphones, media centre and 4K TVs etc. you really need to look to a more powerful alternative.

For that, I attach via Ethernet an ASUS/D-Link/NETGEAR AC router (whatever I have on review test) to the Gateway and then attach all the IoT to it. These routers can handle 40+ devices easily and just pass the internet traffic to the Gateway – problem solved.

If you have the Telstra Gateway and it is doing all you need apart from some blackspots this is a good solution. At $288 it is a tad expensive when you could use range extenders from most brands as access points. But then it would not be as simple as Telstra’s plug and play offer.

So Telstra – you can do something right!

From a marketing perspective, apart from calling it a booster, it does what it claims. Telstra really wants you to have ubiquitous Wi-Fi coverage.

From a hardware viewpoint, it is a lower-powered, AC2600 dual-band mesh extender. While it does what it claims and is uber-easy to set up, it is not for power users. There are far stronger and better alternatives – it is not a one size fits all solution.

Warning – If anyone calls something a booster it’s a scam. We strongly warn you against SuperBoost Wi-Fi repeater that is not only a useless piece of crap that does not work, but readers have had credit card details stolen as well as non-delivery.