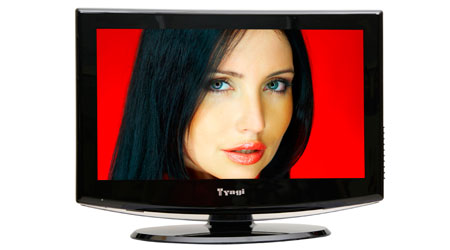 It has two HDMI inputs plus the usual analog video and audio ones, including support for a computer. It also has both analog and high definition digital TV tuners built in, and the TV knows that it is in Australia (in setting the time zone, you get a choice of Australian capital cities).

The digital TV performance was very strong, producing a clean, bright and colourful image. The sound from the speakers was disappointing, though, sounding quite pinched, even when I tried adjusting the bass and treble controls. Still, for watching the news it was okay. The TV has a coaxial digital audio output (and stereo analog), so if you have a sound system it would be worth connecting it to that.

The electronic program guide worked well, showing as many days as were available, and it retained the EPG information for each channel even after you changed to a different one, so that you could see what was on without necessarily having to change stations.

Black levels were not especially strong, to the point where I preferred to leave the room lights on, making the blacks seem stronger by comparison. But they were even. PAL DVD performance was fine, although the picture looked a little cleaner when fed in progressive scan format. Blu-ray performance was restricted a bit because the TV appeared to convert the 24 frames per second output to 60 fps internally, making some on-screen movement look a little jerky.

By my measurement, the TV was frugal in operation, scoring 3.5 stars and about 536kWh per year (there was no label attached to the sample).

Still, this was a respectable 107cm TV at a very good price.