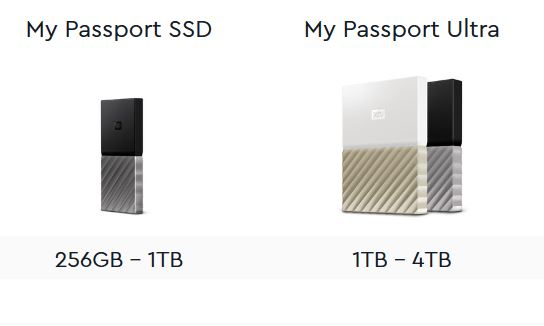 Portable storage seems to be a battle between capacity and speed. SSD provides speed and capacity to 1TB. Ultra uses a spinning hard disk and capacity up to 4TB.

In a few years’ time, SSD will be at cost parity per GB with hard disks – there will be no more need to compromise.

The test unit capacity was 512GB, and we used a Microsoft Surface Pro 4. Cable connection was via a USB-A 3.0 to USB-C adaptor (supplied). We would expect faster results on a USB-C 3.1 Gen 2 device. If possible, we will update these figures with a Thunderbolt 3 device.

The figures below are very respectable for a portable device. Interestingly reads from the disk are usually faster than writes to it.

We compared it to a 1TB Samsung T3 SATA 600 (now superseded by the T5). This is the fastest (and most expensive) portable SSD. While the Samsung figures blow the WD out of the water for raw speed remember that you are using this as a backup device and speed needs only to be respectable for typical use. If you were backing up large GB files, then speed becomes important.

GadgetGuy’s take – My Passport SSD it a great portable

A great little backup device with capacities up to 1TB.

Look online for bargains. There is no issue buying a parallel import of this product.

Note this is the new model with a ‘wave’ design case.

Let’s assume that it does almost everything the SSD does and has similar software. Just don’t drop it as there is a spinning disk inside.

The test unit was a 4TB – capacities range from 1TB

No matter how fast the USB 3.0 interface is, it will be limited by the read/write speeds of the hard disk.

While Crystal Disk Mark shows a reasonable (to be expected from a hard disk) internal read and write speed the aging USB-A to micro-B interface really lets it down for large file transfers giving speeds from .5MB/s to 1MB/s.

99% of review don’t bother to run data transfer tests like Crystal DiskMark. While no test is a perfect recreation of real world use, it is at least a benchmark.

So, we have answered the conundrum. SSD for speed/durability and hard disk for capacity.