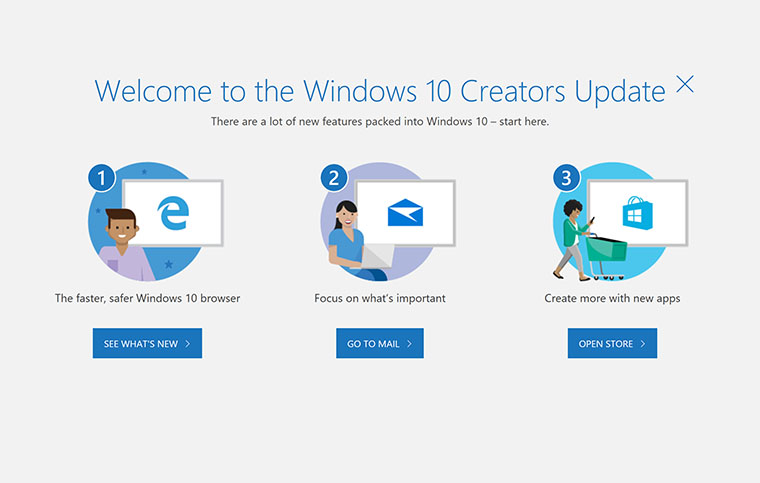 The other day my Microsoft Surface Pro 4 informed me that the Window 10 Creators Update – the first major update since August last year when version 1607 was rolled out – would be … What? Coming soon? Would start downloading in the background? It wasn’t entirely clear, and I too late thought of grabbing a screen shot. Nothing much happened so I forgot about it. But on Good Friday my device informed me that the update was ready to install.

First impression? Microsoft is being conciliatory. After some bad customer relations in recent times over semi-forced upgrades to Windows 10, and some ongoing irritation over the inability to defer maintenance upgrades to a time when one’s deadlines make it practicable, this update certainly started with kindness. It was ready to be installed, I was told, so did I want to go ahead now with a restart? Or wait for some other time? This update, it said, would take longer than usual.

I decided not to wait, but apparently I glided my mouse pointer over the wrong thing and the update screen went away. But it was easy to go to Windows Update in Settings, and there it was: “Feature update to Windows 10, version 1703”. Again, nice language: “This update is ready to install! We need your help deciding when to restart so we can finish up.” Followed by a “Restart now” button or an option to “Schedule the restart”.

The scheduling isn’t open ended. I could set any time for any day up to a week from now. That ought to provide sufficient flexibility for anyone. We all have to sleep sometimes.

But I just clicked “Restart now”. And then there was the wait and the blue “Restarting” screen was displayed with its dots chasing each other around a circle.

My Surface Pro 4 is the lowest specified model available: M3 processor and 4GB of RAM. So it’s not going to be the fastest at upgrading. But it does have a solid state drive, so it’s likely faster than any computer which uses a hard disk drive as its C: drive.

After a couple of minutes a “Configuring update for Windows 10, 16% complete” message appeared. By four and half minutes it reached 35%. Then it did the usual Windows thing of sitting there for a couple more minutes before suddenly racing through 66%, 71%, 81%, 87%. After sitting on 100% for a minute or so (I’m not sure Microsoft and I fully agree on the meaning of 100%), the system rebooted. That was just over nine minutes after the start.

But that didn’t mean it had finished. A second round of bluescreen updates started. “Working on Updates: 3% [it says as I type]. Don’t turn off your PC. This will take a while.”

At some point between 33 and 38 minutes from when I hit the “Restart now” button (I stepped out to descale my washing machine, as one does) all that stuff finished and the computer wanted to log me on. After doing that, it delivered some uplifting messages on the virtues of Windows 10 while it performed background tasks, and then after a minute or so, had my desktop open with a “Welcome to the Windows 10 Creators Update” message opening in Edge, the Microsoft web browser (along with an invitation for me to change the default browser to Edge, since I have that set to Chrome.)

So, it’s a “Creators Update”. There are plenty of new features, including Windows Paint being upgraded to support 3D, a games mode in the Xbox app to make sure your game gets most of your computer’s power rather it being spent on background processes, a blue light reduction feature (the current fad which is popping up everywhere) and significant advances in “inking”. I shall explore some of these in coming days and weeks, but there are a few nerdy things that popped out at me which I’d like to mention. Some are welcome, at least one not so much.

First, the Windows-X pop up menu. You know about that don’t you? Windows key and X and a menu appears over the Windows logo at the left of the task bar, giving you quick access to a number of useful systems type functions. It can also be brought up by right-clicking on the Windows logo.

Some of the items have been renamed, but two items have been switched. Instead of the Command Prompt (plus the Admin) version, you’re now offered PowerShell. Command Prompt is basically a DOS box in which you can type commands like “dir” or “type file.txt ! more”. PowerShell is an enhanced version of that more suited to people familiar with Unix/Linux and other power users.

But the other changed items is that access to “Control Panel” has been changed to “Settings”. No, Control Panel has not yet been eliminated and there are plenty of its settings which have not been migrated across to the Settings app yet, but you’ll have to start it by typing “Control” (or “control.exe” or “Control Panel”) in the Win+R box or the Cortana box.

The Settings app has been slightly reorganised into a more sensible order. App control has been pulled out from the “System” section and give its own heading. Carrying through with kinder handling of updates, you can now schedule them for up to seven days away after they are downloaded, and set your daily working hours (which is when an update won’t be conducted) to up to 18 hours, a big improvement over the maximum of 12 hours permitted in the old Windows.

There have also been some general usability enhancements. For example “Windows Hello” – the face recognition logon system – is now dazzlingly fast. I don’t know how many idle seconds I’ve wasted in the past just waiting for it to do its stuff. Only a few seconds each time, but they are frustrating. Now gone.

And now when I touch the pen in a text box, say to enter a file name, the keyboard pops up automatically, just like on an iPhone or an Android phone, instead of having to be manually invoked. As someone who uses the pen for writing when I’m flying, that’s going to be a great time saver.

Finally, there’s the theme of respect for the user. Sometimes software companies seem to believe they need to make their customers do what the company thinks is good for them, rather than what they want to do. Microsoft has in the past been guilty of this. Take, for example, viewing pictures in Windows.

For years – from at least Windows XP – you did this with the Windows Photo and Fax Viewer app. But beginning with Windows 8, Microsoft introduced a prettier, modern app called Photos. No doubt it has certain virtues – for example, it’ll play your videos as well, and you can have it show File Information (resolution, date, even a map of where the picture was taken if it has encoded GPS coordinates, as most phone photos do).

But for ages it would not allow you to zoom the photo to 1:1, which as someone who is dealing with graphics all the time I find vitally important. This capability was introduced at some point recently. I thought it was with the Creators Update, but I see that my Desktop computer can now do that as well (it’s still running the previous version of Windows).

More importantly, with Windows 10 Microsoft “deprecated” the old Photo Viewer app. It was still part of a Windows installation, but it wasn’t offered as an “Open With” option when you right clicked on a photo file, nor could it be easily associated with any graphics files except for TIF files … even though it still worked with JPG, PNG and so on.

“You will take your medicine!” Microsoft was apparently saying. The Internet abounded with Registry hacks to restore the function.

No need to now, it’s back! Microsoft has relented. It appears in the “Open With” context menu and can be associated with GIF, BMP, PNG, JPG, TIF and a few other formats.

I’m pretty much reconciled to using the new app these days. It is prettier and my computer’s fast, so it’s not much slower. But the important thing about this is that it seems Microsoft is listening to its customers. And responding.

And that’s good news for us, and for Windows.