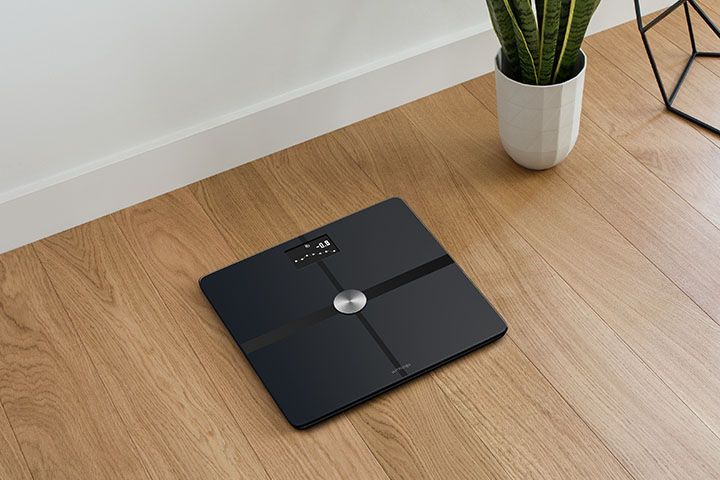 Designed in France, the Withings Body+ smart scales ought to prove useful to anyone planning a healthy lifestyle. This model – numbered WBS05 – tracks your weight for you, and indeed for your whole family. Along with some other interesting stuff.

Why smart scales? It’s easy enough, I suppose, to use any old digital scales and simply record your results in a spreadsheet. But smart scales automate this and somehow, at least for me, that makes it easy to include weighing myself part of my morning routine.

Withings, has a fitness ecosystem. A long-standing one. We reviewed an earlier model of Internet-connected scales almost ten years ago. (Good news: the price since then has fallen from $299 to $180). And Withings also has a smart watch (which, I noted in my review, lasts nearly a full month on a charge).

As for the Withings Body+ scales, they of course measure your weight but also your body composition in terms of fat and water percentage.  I’d been under the impression that those things were typically deduced from other measurements and your history. But the instructions make it clear that you must be bare-footed while weighing yourself for those things to be detected. Skin conductance?

use the Bioelectrical Impedance Analysis (BIA) method. The scale sends a tiny current that allows it to measure your impedance which can then be used to calculate an estimate of total body water.

Total body water can be used to estimate fat-free body mass and, by difference with body weight, your fat mass.

The Withings Body+ scales can be used by up to eight people, apparently distinguishing between them by their weight. It can pass their measurements to the one master app, or to the individual Health Mate apps installed on their own phones.

The scales connect to your home Wi-Fi and automatically pass on your weight and body composition results to the Health Mate app on your phone.

The scales also show those things on the clear, bright, 62mm by 42mm display. Plus, they show a graph of your recent weight measurements and can also display the weather forecast for that day. (Why? So you can plan an active day ahead.)

In fact, you can use the app to select which things the scales do show, so you can also have it show muscle mass and bone mass as percentages. Or get rid of anything you don’t like.

As always, it’s best to take those things as general guides. As the fine print on the box says, the Withings Body+ “is not a medical device”.

The scales themselves seem sturdy. They measure 327mm square and are fairly weighty. Four wider stick-on feet are included on the box. They are for use on carpeted surfaces. The Withings Body+ scales are powered by four AAA batteries – good quality Eveready Max alkaline batteries were already installed. You just pull out the plastic tab to power up the scales. They are rated to last eighteen months.

The Withings Body+ scales are impressively fast. They’d typically settle on a weight within one second. They show little arrows on the corners of the display to help you balance your weight properly. I rarely saw them. I think you have to be quite off-centre to need their assistance.

The results of a weigh-in typically got to the app on my phone within a minute.

Setting up the Withings Body+ scales

You set up the scales the first time with the app, including managing the scales’ connection to your Wi-Fi. That failed a couple of times when I tried to set them up in my home, which is serviced by a good quality router configured to work as a Wi-Fi access point. So I took them to my office which houses the main Wi-Fi router (they all use the same SSID for seamless network switching) and the setup worked perfectly first time.

All that was going to be a negative, of course. Except that today I took the scales back inside and put them in the second bathroom, which is about as far from the Wi-Fi access point as you can get in my home, and they immediately started working perfectly. So who knows what the earlier problem was.

And that was going to be my only complaint.

As I said, I’m not certain how accurate the body composition measurements are, but the weight measurements seemed to be spot on. They matched my own calibrated scales within the 100 grams resolution the Withings Body+ scales afford.

Be a little careful if you decide to purchase the Withings Body+ smart scales. There are two links to online retailers on the company’s product page. The one to Amazon takes you to the Nokia Body smart scales. Now it seems that these scales are indeed available branded as either Withings or Nokia, and otherwise don’t vary. But I wonder if the Amazon scales are the same. I think they are the cheaper “Body” model, which has few features. It’s also apparently a lot cheaper – Amazon is selling it for $98. So before handing over money, check out the feature set to make sure you’re getting the right one.