Acer brings touch to a Chromebook and a tiny tablet 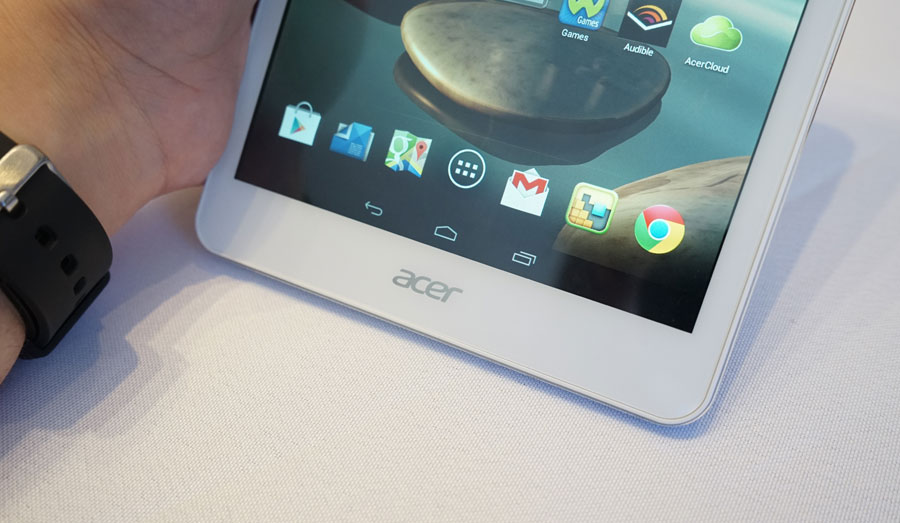 Portable computers look set to improve this month, as Acer releases a budget tablet destined to take on Apple’s iPad Mini, and a new Chromebook that lets gives your fingers some more fun.

Two newbies look set to grace store shelves with their presence, as Acer brings the fight to portable computing with gadgets under the $500 mark.

We’ll start with the least expensive of the pack, and that’s a new Android tablet arriving very shortly from Acer, with the A1-830, a new 7.9 inch device sporting the same 4:3 aspect ratio of the Apple iPad Mini, and even the same screen size and resolution as the model without a Retina-grade screen.

Under the hood, though, Acer has gone with Intel’s Atom processor to make it fast and decent on the battery side, providing as much as 7.5 hours of life, along with some solid gaming performance for Android entertainment titles.

“Tablets have changed the way the world thinks of computing,” said Acer’s David Sunton, General Manager of Marketing at the company’s Australian arm.

“At Acer, we have found that our customers want a tablet that is small enough to be portable without compromising on performance. The Iconia A1-830 fits the bill as it is ideal for schools as a teaching tool, in businesses to improve efficiency or purely for use in daily life.”

Design-wise, Acer has moved away from the plastic bodies we’re so used to seeing in the Android tablet space, with an aluminium casing surrounding the 7.9 inch IPS display which looks pretty good from all angles.

Acer has also managed to keep things relatively thin, with an 8.15mm thickness, and two speakers on the back, which the company hopes to improve sound when you’re not using headphones.

WiFi, bluetooth, and two cameras are also included, putting it on par with most devices out there today, though built-in mobile connectivity is not provided. A Bluetooth keyboard will also be made available for the tablet, optional, of course, and capable of providing a stand for the tablet using folds like the Asus and Moshi origami cases.

Pricing for the Acer A1-830 comes in at $249, with availability likely within a week.

Also getting the gift of the grab (see what we did there?) is Acer’s C720 Chromebook, which will be updated to the C720P this month.

This minor refresh brings Acer’s Chromebook attempts up to a fourth model, and while it keeps the Intel fourth-generation Haswell based Celeron processor, as well as the 16GB solid-state storage, it increases the memory to 4GB and replaces the 11.6 inch HD screen with one that is the same size and resolution, but now supports touch.

There’s also a splash of paint applied, with grey lightened to white, and the plastic design looking like it’s been firmed up just a touch.

But touch is one of the key features here, and Acer’s C720P will actually be the first Chromebook in Australia to support the technology, and the second Chromebook in the world outside of Google’s own experimental Chromebook Pixel, the latter of which never came to Australia and fetched a pretty un-Chromebook price of over a grand in US dollars.

“We are thrilled to be able to bring touch technology to our Chromebook lineup,” said Daniel Goffredo, Acer’s Head of Commercial Client Products in Australia.

“The 10-point touch display brings the Chromebook interface to life like never before, making it so much more immersive and fun to use.”

While touch is one of those things that you may not yet need in a Chromebook, when developers jump on board, it’s possible we’ll see more apps and websites engaging with Chrome’s touch capabilities.

But it’s more than about being able to touch a web browser or zoom with your fingers, as Goffredo told GadgetGuy that it’s also about durability.

“The biggest thing in education is cracked screens,” said Mr. Goffredo. “The first thing you get from a touchscreen is a stronger display.”

Hands on with the device this week, and what we’re basically seeing is just what Acer has suggested: a slight refresh on an already great Chromebook. We liked the C720 when we checked it out last month, and the updates here look like they could improve the performance (thank you extra memory), though we’ll have to see if the touchscreen is better for users, and better for colour.

The last one we’re not sure about yet, and the quick play we had with it suggested the screen of the C720P hasn’t improved much beyond what we saw on the C720, but a review will let us find out for sure.

If you can’t wait for a review, though, Acer’s C720P should be arriving in stores across the country shortly, priced under $500.