Acer shows off its new Swift computers at IFA Berlin 2016 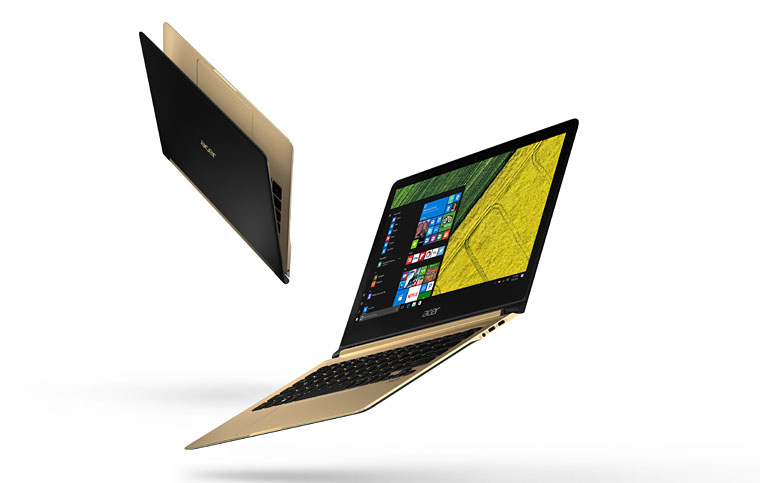 Light weight ultrabooks are definitely one of the hot things in computers at the moment. Acer, one of the world’s computer notebook biggies, took the opportunity of the IFA Berlin 2016 show to highlight its new ultrabook “Swift” range, which consists of four models (and, of course, lots of options for each).

The Acer Swift 7, says the company, is the first laptop in the world to be under a centimetre thick. It beats the mark by – get out your micrometer! – 0.02mm. By way of comparison, a MacBook Air is 17mm thick. The company also launched the less slim Swift 5, Swift 3 and Swift 1 models which cover a wide range of needs. The Swift 1 models, are “light and budget-friendly”, powered by Pentium or Celeron processors, but still pack a claimed twelve hours of battery life and come with 32GB to 128GB eMMC storage.

The super thin Swift 7 is clearly designed for portability. Built with a dual tone – black and gold –aluminium “uni-body”, and with the 13.3 inch full HD display protected by Corning Gorilla Glass, it weighs 1.1 kilograms.

The Swift 7 will run a 7th gen Intel Core i5 processor (this is from the forthcoming “Kaby Lake” range), a 256GB solid state drive, up to 8GB of memory and 802.11ac MU-MIMO WiFi. Two USB Type-C ports provide for additional displays, data transfers and charging. Battery life is rated at nine hours.

The Swift 5, relieved somewhat of the constraint of extreme slimness, has more options and power available, even though it still weighs just 1.36 kilograms. And it’s still less than 15mm thick. Storage can be up to 512GB (SSD of course) and a full HD 14 inch display is provided. With more space a bigger battery is included, rated at up to 13 hours of use.

The Swift 3 goes a touch thicker at just under 18mm and 1.5 kilograms in mass. It also can be fitted with SSDs up to 512GB, with 14 inch displays optionally in HD or Full HD. A built in finger print scanner assists with quick logons.

Even the Swift 1 is only 1.6 kilograms in weight and still less than 18mm thick.

Acer talks of “budget-friendly” and “compelling” prices, but doesn’t have any pricing information available yet. Word is that the Swift 7 will be just under a thousand dollars in the United States, so I’d expect north of $1500 here, but I’d love to be surprised.