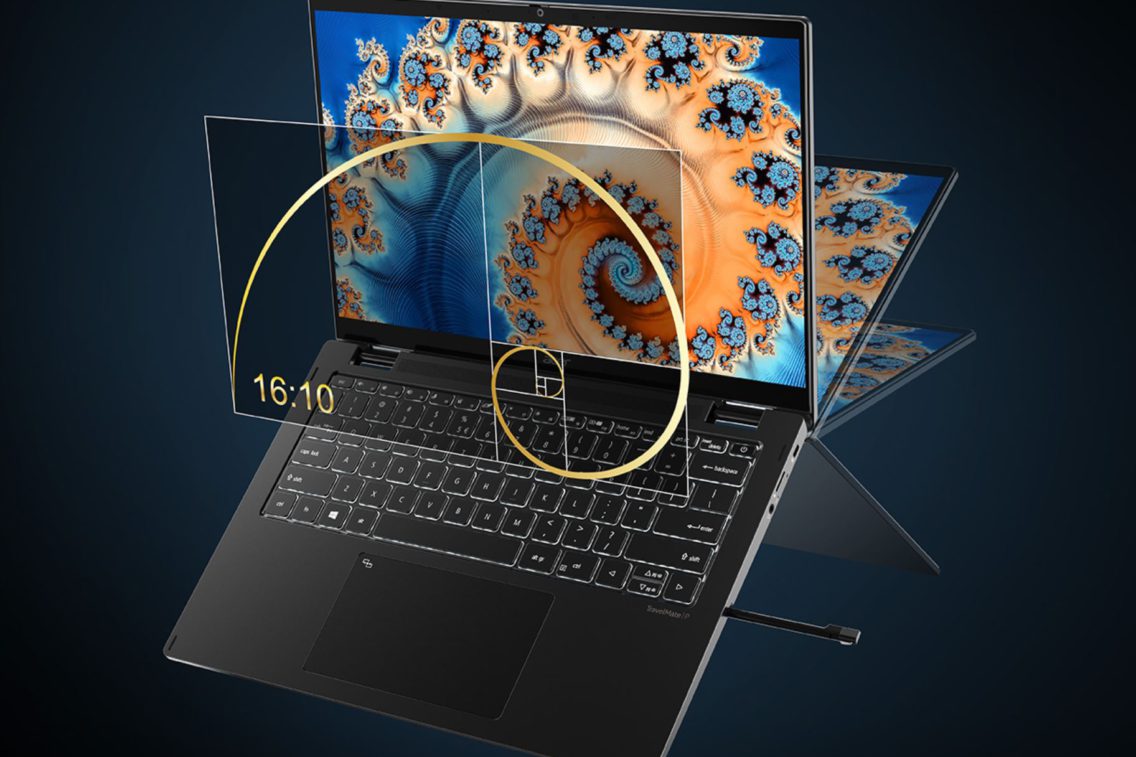 The Acer TravelMate Spin P6 – MIL-STD 810H Intel Evo class notebook (what a mouthful) is what we like to call ‘almost perfect’ because it has everything you could want in a small, thin, light, 14” touch/stylus, business-class notebook. SOLD!

Spin means it has an x360 hinge design, so you can use it as a clamshell, tablet, presentation mode and tent. It is touch and has a Wacom AES standard active stylus.

Acer has been around a long time in Australia. It makes a range of consumer and business desktops, notebooks, monitors, Predator gaming and ConceptD ‘creators’ powerhouse devices.

In the consumer notebook field, it has Swift, Spin, Aspire, Nitro and Chromebook.

We are trying a new format for notebook reviews. Each segment has its specifications, and our tests and comments follow each. Note that a pass mark is 8/10, and we add points where it exceeds that – or vice versa. If you want to skip the tests and go straight to GadgetGuy’s take at the end.

Note that we tested a pre-release model of Acer TravelMate Spin P6 that may not be what the final release will be. We are pretty sure fingerprint, privacy screen and 5G will be the main options.

It is an all-business style, and I love the x360 format – it is particularly useful in tent mode as an extra screen when using a Thunderbolt Dock and multi-monitor setups.

It has small side bezels, and the top is just thick enough to accept a Windows IR camera and dual mics.

It is an Intel EVO class processor which assures you of the best performance and battery life in a notebook. It has configurable Thermal Design Power from 12-28W, meaning that while you may get 20 hours of low-end use, it can go as low as 5 hours on maximum load.

The Iris Xe is also a competent performer and should pay most PCX games at medium to high frame rates. A nice feature is support for up to four monitors.

Memory is soldered to the motherboard, so we suggest ordering it with 16GB to be a little future safe – 8GB is fine for most users.

It is a fingerprint magnet – as is the matte finish black case.

The Wacom AES stylus conveniently docks and charges in a garage under the right-side keyboard. It is active, and a single charge lasts many hours. We tested with Windows Ink, and it was excellent.

Webcam – I can see and hear clearly!

At last, a webcam that rises above the rubbish 720p camera ‘afterthoughts’ on so many laptops. It is also for Windows Hello Face ID.

The dual mics use Intel Smart Technology that beam forms on your voice so you can be sitting off-angle. There is mention of four mics and far-field capabilities, but the review unit did not have this.

Acer usually has ‘average’ chiclet keyboards. I am pleased that this is spill-resistant and has a slightly deeper 1.2mm throw (1.5mm is ideal) and 45g actuation (good). Backlight is auto (as you type) or off. It is fine for most everyday work.

Sound – bright vocal is not great for music

Now Acer would like you to believe the specs above, but in its native state, it has no low/mid/high bass, slowly building from low-mid at 200Hz then peaking at 1kHz where it drops back and is pretty flat until 10kHz and then gradually drops away to 20kHz. Bright Vocal (bass recessed, mid/treble boosted) – for vocal and string instruments, but makes them harsh.

The sound is ‘tinny’ so forget rhythm and blues. The sound stage is very narrow, coming from dual up-firing speakers in the keyboard deck under the screen. And if you use the device in tent mode, the speakers point away from the screen.

Now, this device is supposed to have DTS Audio, but we could not find an app or equaliser to test that. Note that it does have the Dolby Access app, but it costs $25 and is for Dolby on headphones only. At this stage, we have to fail the sound until we can test the missing DTX app. It is optimised for clear voice. You can read more about sound signatures here

It works with any USB-C PD 65W or greater charger or upstream from a Thunderbolt 3 or 4 Dock.

Battery life is always dependent on use, but you should get a day out of it. Fast charge is nice.

The HDMI 2.0b port supports an external 4K@60Hz (or lower). We tested with a Plugable Dock using the latest Intel Titan Thunderbolt Chipset supporting TB4 and USB-C 3.2 Gen 2.

The dock could power two additional 4K@60Hz monitors and deliver full bandwidth and 5V/3A downstream to the USB-C ports.

Build – made to last

It is light and tough, and the MIL-STD 810H tests give certain confidence. Maintenance is possible via the removal of several micro-Torex screws, and Acer is generally field serviceable. That means you should be able to upgrade the SSD and replace the battery later in its life.

The finish appears anodised, so it should be reasonably scratch resistant.

If we have one complaint with Acer, it loads lots of bloatware that you are better off removing. Although if you ever do a factory reset, it all comes back.

It has Windows 10 Pro (upgradeable to W11 at no cost) and a load of Acer apps that a system administrator could use for device management.

It is nice to see Windows Hello fingerprint (not on the review model) and Face ID. It can also sense when you leave the room and locks itself.

I have been an Acer fan since the 80s and managed a fleet of Acer TravelMates in the early 00s. They have always been relatively trouble-free, and if you have an issue, support is ex-Sydney – they even have a 1300 support number.

In the beginning, I said the Acer TravelMate Spin P6 is ‘almost perfect’, and apart from a sound issue (with the review unit) and soldered RAM, it is.

I would go so far as to say it is what I would buy – x360 hinge, 2 x TB4 ports, HDMI, touch screen (although I am spoilt by a Surface Pro 7), plenty of power, good battery life and MIL-STD.

So far, all the EVO reviews have scored very well, and this is no exception.

Its competition is more on price – Dell, Lenovo, HP, Dynabook, and even LG have EVO notebooks, all with similar base specs.