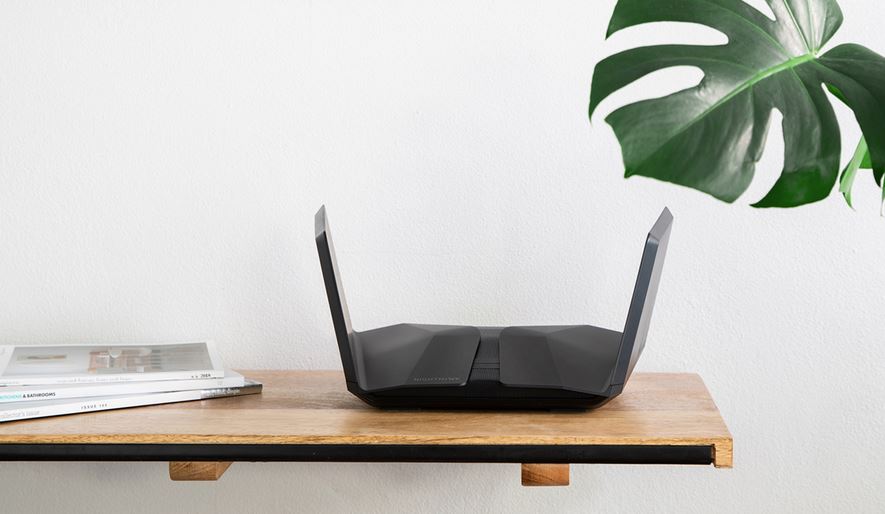 The Netgear Nighthawk RAX200 tri-band AX11000, 12-channel router is the stuff nerds dream about and with good reason. It is the best, fastest, and meanest router on the planet right now. It is the perfect engine for any large home or smart home setup.

In everyday parlance, the Netgear Nighthawk RAX200 is a V12 engine with turbochargers. It will support more 2.4Ghz devices in 4×4 300Mbps Tx/Rx stream, distributing 1200Mpbs to them. This can control hundreds of Wi-Fi smart devices.

The typical Telco-supplied dual-band AC1900 to AC2600 router usually has no more than 4-streams and pretty weak signal strengths. Pathetic really and not suitable for more than 10-20 Wi-Fi connections and 10-metre range.

It is a trusted company – no spyware, backdoors, or data collection other than what it needs to provide the service. NETGEAR has a zero-tolerance policy for both forced labour and human trafficking. It constantly assesses risks related to its supply chain and compliance with the NETGEAR Supplier Code of Conduct. For these reasons and that they make excellent and reliable gear, Netgear and Arlo have GadgetGuy’s 100% support.

The Netgear RAX200 tri-band AX11000, 12-stream router is the backbone of the connected home

First, if $899 knocks the wind out of your sails, you need to know that there are some other fantastic Netgear Nighthawk RAX range. Here is a summary

Netgear sells via computer resellers and major CE retailers. Shop around, and you will find the RAX120 for $660 and the RAX80 for $539.

We have likened the Netgear Nighthawk the Flying Nun – Sally Fields and Star Wars Kylo Ren’s Command Shuttle. The Wings contain some of the antennae and fold ‘up’ to function.

These are big routers and can wall mount with the ports then at the top or bottom if you like cables hanging down the wall.

Even the most powerful router only has a circular 20-metre (diameter) inside home coverage area for 5GHz and 30 metres for 2.4GHz. You can get longer distances in uninterrupted line-of-sight. Or add an extender or mesh satellite.

First, read our one-page Kill Wi-Fi Blackspot guide to tell you where it is best to place the router. Let’s just say the worst place is in the garage or at either end of the house. It needs to be the centre of attention.

You can use the Android or iOS app for easy setup. Or just connect via Cabled Ethernet to 10.0.0.1 or Wi-Fi.

It checks for a firmware update and then, after a few minutes’ reboots. Then you log in again with the new password and SSID.

Now, this is a beast

The figures above are impressive. They show an outstanding router antenna design that holds the signal out to the limits of the 5MHz band.

The Mesh Extender shows that while it is capable of AX6000 it will support a throughput of 488Mbps (2.4GHz) and 1441Mbps (5Ghz) = 1929Mbps in its current location. This is one of the few devices that tell you that actual bandwidth available. And for once, it is faster than a Gigabit Ethernet 1000/1000 backhaul.

Note: Using an Ethernet backhaul limits the device to an Access Point with a separate SSID.

It has the usual parental controls and more at extra cost. You can set profiles for each family member, set schedules, time limits and bedtimes, automatically blocking a child from using any of their devices past a specific time. More here.

The Netgear Nighthawk RAX200 tri-band AX11000, 12-stream router is overkill for most – any of the Nighthawk RAX routers will suit most homes. But it is enormously satisfying to have the world’s fastest and strongest router powering the smart home. And a router is generally a 5-year plus purchase; it is worth it.

The EAX80 (in Mesh or Access Point mode) solves Wi-Fi blackspots. The router is easy to set up, and the defaults are fine. For nerds, there are many customisable configurations. Other features like the Muti-Gig internet port (for those that can afford the NBN plan) and 2 x USB-30 Ports make it a very well-equipped router.

To mesh or not

Mesh – lots of little routers joined together is a comprise when compared to the RAX200 and a mesh satellite. But they all have a place in different sized homes and different smart home setups.

It is the best yet, although we have only reviewed one other AX1000 router – the ASUS ROG Rapture GT-AX11000 and it too is a beast. It scored 9.4/10. While it has a gaming focus, both routers performance is pretty much on par. ASUS has been around a little longer, and it is now selling for as low as $729 at mWave.

Netgear edges ahead because it is a network focused company, and its batwing design is far better than eight spider leg antennas.

You can read other router reviews here.