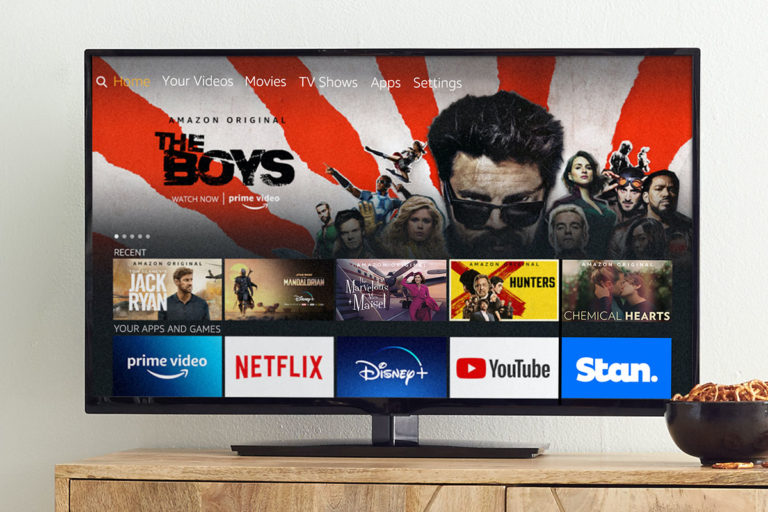 As with so many other “TV”s, the Amazon Fire TV Stick Lite isn’t really a TV. You have to supply the screen. And it doesn’t actually receive any TV stations. But it is nonetheless a cheap, cheerful way to stream video from all manner of providers. And it has some useful features to help you with that.

The Amazon Fire TV Stick Lite consists of the streaming tech inside, well, a stick. Said stick is 86mm long, 30mm wide and 13mm deep and weighs only 32 grams. On the end is a HDMI plug. Halfway up one side is a Micro-B USB socket for power. A power adaptor and cable are included in the box. As is a HDMI extender. This short HDMI female to HDMI male cable is there to allow the Amazon Fire TV Stick Lite to reach HDMI sockets in tight locations.

To complete the package, it also comes with a slim Bluetooth remote control and a couple of AAA batteries to power it.

Inside it has a 1.7GHz quad core processor, 8GB of storage, dual band, dual antenna Wi-Fi supporting all the standards up to 802.11AC, and Bluetooth 5.0. The remote has a microphone key. Hold that down and you’ll find that Amazon’s Alexa voice control system is implemented on the Amazon Fire TV Stick Lite.

Since ABC iView for one supports streaming live TV, perhaps I was hasty in saying that the Amazon Fire TV Stick Lite doesn’t receive any TV stations.

Setting up the Amazon Fire TV Stick Lite was fairly easy. Plug it in and switch to the appropriate TV input. The unit guides you through the process with its on screen display. First it pairs the remote control, then you select your language, and then choose your Wi-Fi network. The only slightly irritating part was keying in the Wi-Fi password using the onscreen keyboard. Arrow, arrow, arrow, arrow, click; arrow, arrow, arrow … and so on. That done, it immediately called home and checked for firmware updates. Of which there was one, of course. The download was fast and the thing undated itself in a couple of minutes. And then it was right to go.

I initially tried to power the unit from a USB port on the TV I was using. It started up okay and let me get past the remote pairing stage, but then announced that there was “Insufficient USB power detected” and instructed me to use the included cable and adaptor. It did give an option to continue anyway, but I figured I’d better do as told.

As is the way of these things, when you fire up the “TV”, it will present on the screen of your actual TV a bunch of things for you to choose from. The Amazon Fire TV Stick Lite organises the screen basically by “Your Videos” – things that you’ve put on your watch list – Movies and TV Shows. Let’s say you click on Movies, you’ll then be presented with another grid, this time of movie titles. The grid’s nearly four tall by five-and-a-little-bit wide. You can arrow down or across. There are Recommended Movies, Featured Movies, Recently Added Movies, a bunch of genres and so on.

What I found interesting is that while, perhaps not surprisingly, the Amazon Fire TV Stick Lite leaned towards Amazon Prime content, it also presented Netflix content. I subscribe to both Amazon Prime and Netflix, but not to Stan or Disney+. At one point I did notice a show that seemed to be available only on Disney+.

If you click on a movie (or TV show), the unit may allow you to stream it on Prime, give you a choice (in my case) between Prime and Netflix, or offer it on Netflix only. In other words, it’s more content focused than platform focused.

One of the useful bits of information it provides for most of the content is the IMDB rating. That is, the rating the movie has from the voters – that could be anyone, and it includes me as a long-time IMDB member and voter – on the Internet Movie Database. IMDB started off in the very early days of the Internet on a listserv, and was then transferred to the Web when that became a thing. Eventually it was bought by Amazon, so it’s not surprising that it is being drawn upon by an Amazon gadget.

Not surprising, but very welcome. I find the IMDB rating imperfect, but way more reliable than various professional critics, including the Rotten Tomatoes score.

Now, many of the shows and movies available if you have an Amazon Prime membership – as I do – are free. Likewise, those available through Netflix are free (as, I imagine, are those on Stan and the others). And of course the stuff on ABC iView and the other catchup TV services, is free. But some content isn’t available for free, but can be “rented” (a limited time period for viewing) or “purchased” (you can watch as many times as you want, indefinitely into the future). So when you click into those items you get to choose whether you want to pay, say, $4.99 to rent the item, or more to buy it.

Perhaps I’m a cheapskate – in fact, it’s almost certain that I’m a cheapskate – but with very rare exceptions I don’t want to pay extra for content, given that I’m handing over a significant number of bucks monthly to Prime and Netflix. I would have appreciated a dollar-sign icon shown on the paid content on the grid pages, rather than having to click through to them and be disappointed.

That said, there is a simply enormous amount of quality free content. Just one random one: for at least a decade I’ve been keen to see the 1947 movie The Best Years of Our Lives, but had never found it on a streaming service or on an Australian-compatible disc. But there it was on Prime Video, delivered by the Amazon Fire TV Stick Lite, and free. Oh, I did enjoy it. Also free, His Girl Friday. But other classics such as Key Largo and The Treasure of Sierra Madre and The Princess Bride were available, but cost $4.99 to rent, $14.99 to buy. (Some others I searched for, such as Arsenic and Old Lace weren’t available. Luckily I have that one on DVD.)

I went a little berserk just there in looking up various movies (along with a bunch I didn’t mention). In large part that was because the Amazon Fire TV Stick Lite made it very easy. How? That microphone key on the remote. The gadget implements Alexa. You can use it in the same way you might use an Amazon Echo smart speaker. Hold down the microphone key and say “what’s the weather today” or “tell me the square root of pi”. Or just say The Treasure of Sierra Madre, and there it is on the screen.

I had the device plugged into a HDMI input of a Denon AVR-X3500H home theatre receiver, rather than directly into a TV’s HDMI input. The various shows and movies I dialled up were delivering their audio in two-channel PCM format. I explored the settings and these suggested that things like Dolby Atmos and lesser forms would be passed through to the audio gear in original format. But it just didn’t happen. To double check, I ran the same movie from Netflix – Spider-Man: Homecoming – on a Panasonic DP-UB820 UltraHD Blu-ray player. It fed the native Dolby Digital Plus audio through to the receiver. So the system was working properly.

But in view of it apparently being limited to two channel PCM, it’s probably not the best choice for those with a surround sound system.

Features
Value for money
Performance
Ease of use
Design
Brilliant value for money
Snappy performance
Clever content organisation
Couldn’t get native surround sound out of it
4.5