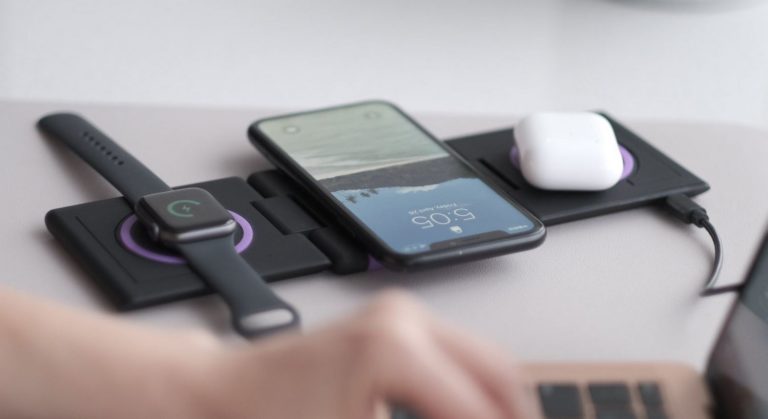 The Ampere Unravel AW+ unique proposition is the ability to charge three devices at the same time – iPhone, iPod and watch – oh, and Android users can get a 3+1 version with three charger pads and a 5W USB-C output.

We put the Ampere Unravel AW+ through its paces and it passed with flying colours – just as well as it comes with a choice of fire emoji red, pure black, glow in the dark green, sky blue, coral and navy highlights.

Ampere Unravel AW+ – this is the product Apple tried to build but could not!

It is a little larger than expected at 88 x 88 x 30mm (stacked) or 270 x 88 x 10mm (flat) x 248g (plus a charger). That is not a bad thing as the pads (about the size of a thick drink coaster) need to be large enough to place an iPhone on. It is quite solid too, with large hinges and screw-together construction -– quality, not cheap!

If you want to use all three pads, you need at least a 30W USB-C PD 2.0 (or later) charger but we recommend a 60W (if only because you can, and it does not cost a lot more). Or you can use any other USB-C PD charger above 30W.

You may be tempted to use it flat for three devices, but the clever Z-hinge and a magnetic clasp allows for FaceTime charging, or watch only, or one pad.

The 10W pads have a non-slip charging ring, and the centre pad has non-slip edge pads. The 2.5W watch pad has the Apple Magnetic holder.

The only issues we found are

While a 30W USB-C PD works with all three devices at the same time, charging time is over eight hours. If you use a 60W charger, then that reduces by about 30%.

Note Qi charging is not as fast as cable charging – it is more an overnight thing. Unravel claims 3.1hours to charge the iPhone X with a 60W PD – we assume that time is for the iPhone only.

Works with phone cases up to 3mm thick.

Like so many Kickstarter campaigns it got off to a well-funded but shaky start with early shipments not quite delivering on the Apple Watch promise – Guys under-promise and over-deliver!

The finished product does what it says, although it is not perfect. For example

Still, it is well made and it will do what you want. I suspect Apple users, however, will want something a little more ‘Applesque’ perhaps in rose gold, silver and space grey.

Android users need to be aware that the 3-in-1 version has only a 5W USB-C output and that is not a lot of use as a charger port except for watches and other low wattage devices.

Our rating assumes a price of around A$200-250 – any more it is out of the ball-park. You can explore other Qi chargers that GadgetGuy has reviewed here.

Ampere is also releasing Unravel 2  – 2 x 15W pads with “up to 60W passthrough”. But do the math – each 15W pad takes about 20W (at typical 75% Qi efficiency), so it can only pass through the left-over power! But they have taken our advice and it comes in Apple’s faux Rose Gold, Silver and Space Grey!

Features
Value for money
Performance
Ease of Use
Design
Reader Rating0 Votes
Can simultaneously charge three devices
Go for the 60W charger version and order an Australian Plug (or you will get a US plug)
Well made
Charging times are longer than claimed so buy the 60W version
Apple users expect ‘Applesque’ products
4.7