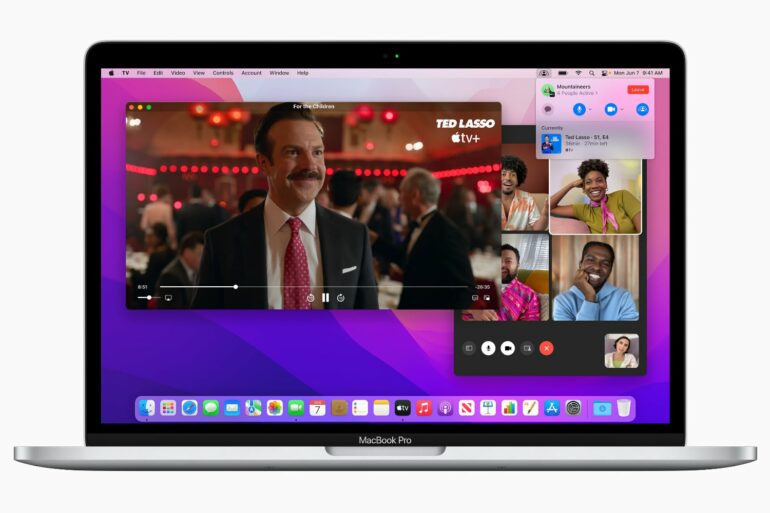 Mac owners can finally watch TV, listen to music and play games with family and friends over FaceTime, as Apple adds SharePlay to macOS Monterey 12.1.

Watch party services don’t involve content sharing, each person in the party requires their own access to the content that everyone is listening to, watching or playing.

Now, Apple is bringing SharePlay to macOS Monterey 12.1, allowing FaceTime watch parties with up to 32 participants across Apple’s macOS and iOS devices.

Shared controls give everyone in the party the ability to pause, play, rewind or fast forward while everyone’s stream remains in sync. Smart volume automatically lowers the audio of a movie, TV show or song when someone speaks, so people can still talk to each other over FaceTime. Split View makes it easy to arrange windows, so you see the FaceTime video call and movie side-by-side.

SharePlay was designed to work with first-party apps like Apple TV, ‌Apple Music‌ and Fitness+, but Apple also offers an API for developers, so third-party apps can also use ‌FaceTime‌ for shared games and other experiences.

Along with adding SharePlay to macOS Monterey 12.1, the update also includes support for the Apple Music Voice Plan, new safety features for children and parents in Messages, redesigned Memories in Photos and more.

The new $5.99 per month Apple Music Voice Plan can only be accessed via Siri. It offers access to the service’s full catalogue of 90 million songs, with tens of thousands of playlists. This includes hundreds of brand-new mood and activity playlists, personalised mixes and genre stations, as well as Apple Music Radio.

Subscribers can request music across all of their Siri-enabled devices, including HomePod minis, AirPods, iPhones and Macs, as well as when using CarPlay. They have full playback controls, including unlimited song skipping through Siri.

In addition to the new map, Siri Natural Language Guidance offers more natural-sounding directions which are easier to follow, such as “At the next traffic light, turn left”.

Additional features in Maps include: