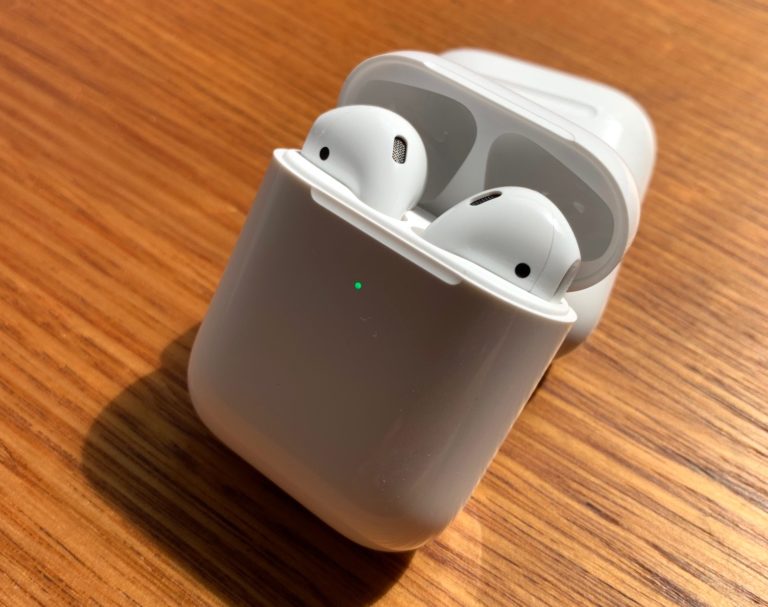 Clumsy cables are just not in fashion when it comes to earbuds. Apple’s ‘fully wireless’ AirPods were launched over 2 years ago, and its trademark white ‘ear-pegs’ are now often seen sticking out of many a commuter or gym-goer’s ears.

Apple has recently updated its AirPods with a new wireless charging option, along with some other quality-of-life improvements.

For those that don’t know, AirPods consist of left and right earbuds that are completely free of cables to connect them together. They also don’t require a lead to connect to your device, as they use Bluetooth wireless communication instead.

The buds fit into a portable charging case that has its own battery. So, when you return your buds to the case after using them, the case tops up the little batteries in each bud. The case itself can be charged (along with the buds) by connecting it with a lightning cable to mains power.

Apple is not the first to offer an earbud case that can be wirelessly charged. Samsung’s Galaxy Buds do it as well, and were launched earlier this year. So why would you want something like this?

For those who wirelessly charge their phones, you can now drop your AirPods onto the same charge pad, assuming it’s the popular ‘Qi’ standard, to top them up. The new wireless charging case also has a Lightning connector, so you can plug it in too.

The case is compatible with your old Generation 1 buds too, and is practically the same size and shape. The only way to tell it apart is by the small LED on the front, the position of the sync button, and the sliver hinge appears to be matte silver rather than glossy.

AirPods get a new H1 chip

Another key difference with the new AirPods is Apple’s revamped H1 headphone chip. Apple introduced its W1 version in the Generation 1 buds to provide a better connection experience compared to regular Bluetooth.

The H1 chip provides a number of improvements to the wireless signal, both in terms of transmission speed and the stability of the connection between the buds and other devices.

Now supporting the Bluetooth 5 standard, the new AirPods can switch between devices twice as fast as before, according to Apple. Also, they are 50 percent quicker to connect to calls being transferred from your iPhone.

If you’re a gamer, there’s a 30 percent drop in gaming latency, so sound effect synching issues are nearly imperceptible. The net result of all of this is that your overall audio experience should be better, whether you’re playing a game, listening to music or answering a call.

The H1 chip also means battery life improvements. Expect 50 percent more talk time, so that’s 3 hours of talking on a single charge versus the Gen 1’s hour and a half. You can also expect about 5 hours of listening time from a full charge, which can be topped up to 3 hours in 15 minutes in-case charging. In total, with the charging case with you, you can get about 24 hours of listening time before you need to recharge the case.

Also new is the AirPod’s ability to respond to ‘Hey Siri’ verbal commands. The Gen 1 AirPods needed you to tap an earbud to wake her up. Now you just say ‘Hey Siri’ and you can request all sorts of things like “play my Chill Mix”, “turn up the volume”, “how do I get home?”, “call Dad” and so on.

Another feature that we love about AirPods is that they will pause your music or video when you take one or both earbuds out of your ear, and resume when you put them back in. It’s a little thing, but sometimes the small details make all the difference.

There are other clever features too. Using accelerometers and optical sensors, the buds will start playback as soon as they’re in your ears, and can skip tracks when you tap on them. The AirPods can also recognise when you’re speaking versus listening, and filter out external noises.

Since the case is compatible with Generation 1 AirPods, the shape of the buds haven’t changed. While they may not fit everyone’s ears perfectly, they’re pretty good for most shapes and fairly comfortable to wear. We were hoping to see a shorter ‘ear-peg’ that doesn’t stick out of your ear as much, however, no changes here. The pics below show very subtle design changes to the Gen 2 (front) and Gen 1 (back) versions.

On the audio front, when comparing to the Gen 1 pods, we really couldn’t detect any obvious differences in sound quality. AirPods are already quite good, and apart from better connection speeds and stability, they are largely the same.

The AirPods will work on non-Apple devices that are compatible with Bluetooth, however, not all of the features will be available, such as Siri.

You can also opt for the value-driven JBL Free X wireless buds, which have a similar 24 hour total listening time – but without the wireless charge case. These can be picked up for about $200. Click here for our full review.

Also, Apple-owned Beats has just released the Powerbeats Pro. These are a more sports-centric choice, with an adjustable fit and sturdy ear-clip. They also feature Apple’s new H1 chip and presumably all of its low-latency and stability benefits. The Powerbeats Pro cost $349.95, so are a more expensive option. We’ll be reviewing the Samsung Galaxy Buds and Beats Powerbeats Pros soon, so watch this space.

Wireless charging is a handy option for those who already have a Qi-compatible charging pad and like to charge their phones this way. Also, with Apple’s upcoming iPhones tipped to have ‘reverse wireless charging’, you’ll be able to charge your AirPods with your iPhone’s battery.

While there are improvements, the new AirPods are quite similar to the first generation, which is no bad thing. Still, a black, space grey or Apple ProductRed™ colour choice would be nice!

Features
Value for money
Performance
Ease of Use
Design
A wireless change option for those that want it
Rock solid wireless connectivity
Very easy to set up and use with Apple devices
Still on the pricy side
4.6