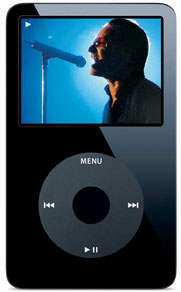 Apple dithered before finally releasing a video capable version of its incredibly popular iPod, first testing the water with the iPod Photo. The video version has a small screen, 6.5 cm, and low battery life, just over two hours.

Apple is now offering music videos and episodes of popular TV shows through its iTunes stores and will promote the idea of video Podcasting in the hope that it takes off. However, despite the clear picture it is hard to get around the fact that the screen is too small to make viewing for more than short periods a common practice.