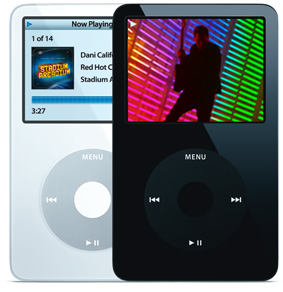 Apple has resolutely followed the same path with its main iPod brand over the years, slowly – often painstakingly – improving minor features and upping the storage. The 80GB iPod does just this; it’s obviously got more storage than any other iPod, and improvements to the screen and the search interface have been made. It’s a bit disappointing that Apple still hasn’t worked out how to cram a radio or voice recorder directly into the iPod’s not exactly sleek body, but the iPod 80GB is still an excellent music and video player.

The 80GB of storage that the iPod – available in either black or white, although there’s no sign of an 80GB “U2” iPod yet – carries can store up to 20,000 songs. While the battery would die long before you got there, that’s (at conservative estimates) a bit over 41 days of continuous music. Eighty gig also gives you a good quantity of storage for video files; the 80GB iPod supports MPEG4 video in the correct display ratio for the 6.35 cm, 320 x 240 pixel screen, but you’ll need to track down a utility to convert your video before sending it to the iPod; iTunes won’t do video conversion for you.

While the smaller Nanos and Shuffles ship in boxes that you’d expect to find housing watches, the bigger “classic” iPods still ship in reassuringly large cardboard boxes. Reassurance only lasts up to a point, however, because even though they’re the same sized boxes that iPods with iTunes on CD have shipped with for years, the newer iPods omit the iTunes CD. If you’re already using iTunes this is no big problem, but if you’re giving an iPod to a computer-phobic friend, you might want to download the iTunes installer first – without it, the iPod is just a moderately attractive glowing plastic brick.

If you’re an old hand at the iPod world, the two major changes that the latest iteration of Apple’s “Video” iPod bring to the table are a significantly brighter screen – adjustable to save battery life – and an integrated search utility that quickly scans your entire media library with a simple letter-based search.

One of the real strengths of the iPod brand – beyond the “hip” factor of the brand itself – has been the easy to understand scrollwheel interface, and Apple’s definitely taken the “if it ain’t broke” approach with this; anyone who’s used an iPod before will be up and running with the 80GB version, and novices shouldn’t struggle for very long at all.

The new brighter screen is a blessing and a curse; it’s now much easier to see video on the iPod’s small screen, and that combined with the improved battery life make the iPod a real contender in the portable media player space. At the same time, the increased glow shows off a problem that plagues most shiny technology – the 80GB iPod (or at least the white version we tested with) is a real smudge and scratch magnet, and a brighter screen makes this all the more painfully obvious.

Apple rates the 80GB iPod as having up to 20 hours battery life for music playback and up to 6.5 hours video playback, presumably with the screen brightness turned right down. We managed around 18 hours with a selection of 192kbps MP3 audio files, still comfortably ahead of competing players from the likes of Toshiba.

If you get past the arguments about whether it’s worth buying an iPod for the brand appeal alone, you reach the realisation that the 80GB iPod is a solid performer. It’s not really something that outperforms the older iPods to such a degree that it’s a mandatory upgrade for existing iPod owners, but for those with dead iPods, or those making the plunge into the portable player space for the first time it’s a very worthy option indeed.