Hands on with Apple’s iPhone X 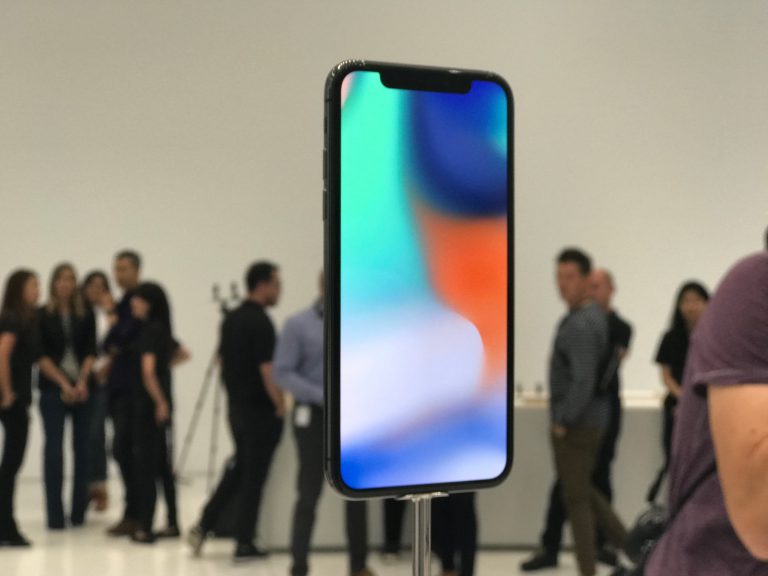 Now that the wraps are off of the new iPhone X, what’s it like to use? We were at the launch event at Apple Park in Cupertino, and had a chance to try it out.

The first thing that strikes you about the iPhone X is the screen size and lack of bezels. While the phone’s body is smaller than the iPhone 8 Plus, which has a 5.5 inch display, the X has a larger 5.8 inch display, albeit in a smaller package. This means that you get more screen and less phone, which is great for those who want a lot of display real estate without carrying a big device.

The screen itself is a dream to look at. The Super Retina Display means that blacks have a complete absence of light, and there’s more detail available to see in darker regions of photos and videos. We were in a brightly lit environment, and the screen’s brightness still cut-through the glare from the overhead lighting.

Otherwise, the fit and finish was top notch. Gorgeous curves, glossy surfaces and the glass-back contributed to the premium feel of the device, and the volume and power buttons on the edges were well positioned and a bit larger than the iPhone 7. Both silver and space grey bodies looked very nice as well.

Using the X is different than other iPhones – since you can’t unlock it with the now-removed home button, you tap the screen to wake it up, then it analyses your face (or you type in a pin code) to access the home screen. You swipe left and right as usual to view your apps, however, to return to the home screen you now swipe up from the bottom of the display. This does take a bit of getting used to, however, it’s not a deal-breaker.

Otherwise, the 18:9 aspect ratio of the new display gives you another row of icons and feels very roomy.

Apple’s new A11 Bionic processor looks to be very powerful. The phone is incredibly responsive and snappy when opening apps and navigating around. Accessing the camera was also extremely fast with no apparent lag. We were shown some photo processing tasks where the phone analysed an image to separate the foreground object (a person) from the background, then transpose the object to a different background. All happened very quickly with no perceptible processing lag.

We tried out the Animoji feature in iMessage. It only took a second for the Truedepth camera system to identify my face and apply its facial mapping algorithms. The system can identify 50 facial expressions including eyebrow lifts, side-smirks and much more.

Once locked in, there was very little latency between my expressions and the corresponding Animoji’s expressions, and it even mimicked my head turning away from the camera. Once you turn your face away past a certain point, the face mapping stops as it can’t see enough of your facial features but once you face the cameras again, it resumes. You can record your voice along with your gestures to send in an iMessage, which will undoubtedly earn a few laughs. It’s also good to see that ‘poo’ is an included Animoji, as it’s one of my favourites, along with the fox, kitty and others.

We didn’t have a chance to try the facial recognition, or Face ID, which will unlock the iPhone X as well as authorise iTunes downloads and Apple Pay purchases. However, we did see the setup process, which is fairly quick and involves mapping your face straight-on as well as from the side.

When speaking to Apple about how easy the facial recognition would be to spoof, they were confident that using a photograph of the mapped face or a very detailed mask, would not unlock it, nor an identical twin or if the person was sleeping or deceased. While they didn’t reveal details of how they tested this out, they did say that Hollywood mask makers were asked to create lifelike masks, complete with eyeballs, to try and fool the system. Since the Truedepth system consists of an array of sensors, it’s possible that the system looks for heat as well as facial contours to make a positive match with a stored face.

It should also be noted that, similar to Touch ID, which is Apple’s fingerprint system, Face ID converts a face to a mathematical signature, only this time using specialised neural networks, which is then stored on the phone in a ‘secure enclave’, or memory module that is designed to keep it safe. This means that Apple doesn’t keep a ‘photo’ of you, or sends anything to the cloud. Overall, Apple says that while Touch ID had a 1 in 50,000 chance of a random person’s fingerprint unlocking the device, Face ID has a 1 in 1,000,000 chance so it’s considered much more secure that fingerprint scanning.

All up, we were very impressed with the iPhone X. It’s an extremely powerful device that has all the ingredients to set the stage for future augmented reality apps, and will undoubtedly influence other Smartphones as time goes by. While some of the technology, such as OLED screens and facial recognition have been available in Android phones, Apple’s has re-engineered and integrated these features extremely well. We’re looking forward to writing an more in-depth, comparative review once we have a change to spend more time with it. You’ll be able to pre-order the iPhone X in Australia on October 27 with prices starting at $1579, and it will be available on November 3rd.

For a closer look, check out Apple’s latest video: