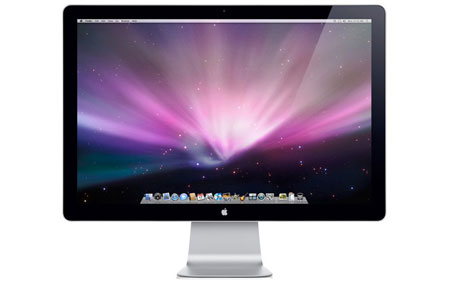 Look at the forums on Apple’s website, and you’ll find a number of people who bought the 24-inch LED Cinema Display only to return it soon afterwards. Why? It simply didn’t work with their equipment. So it needs to be said first up that the LED Cinema Display works ONLY with Apple’s latest batch of MacBooks with the new Mini DisplayPort.

The LED Cinema Display won’t connect to older MacBooks, Mac Pros, Mini Macs, iMacs – or any Windows PC for that matter. At the time of writing, I haven’t been able to find other products that use the Mini DisplayPort either. Also, there doesn’t appear to be an aftermarket adaptor that allows the LED Cinema Display to work with the DVI or VGA ports found on PCs and notebooks.

To be fair, Apple has, from the beginning, made it clear that this product is meant only for its latest range of laptops. People are being caught out by the assumption that any new display will work with a fairly recent notebook or PC – and I don’t blame them. Sure, the Mini DisplayPort could eventually become a popular video standard, especially on notebooks and small portable devices, but not for a while yet.

Considering the LED Cinema Display’s gorgeous looks, you can understand why someone could take one look at it and buy it without first checking to see what video connector it uses. The design is stunning, with great curves, a slender profile and solid metal base. The brushed aluminium surfaces look classy, and the face presents a smooth, uninterrupted look, with glass extending all the way out to the edges. Concealed behind the glass is the 24 inch widescreen LED backlit screen and integrated iSight camera.

The new MacBooks share the same materials and design ethos, and make a harmonious pairing. There’s even a dedicated spot atop the stand’s foot for resting your laptop, although care needs to be taken to make sure one doesn’t scratch the other.

The three different connector cables wrap together to form a single cord that attaches to the rear of the display. On the other end is the USB 2.0 plug, MagSafe power connector and a Mini Display Port. With a MacBook tucked onto the curved shelf formed by the base, all three plugs can be neatly connected to the notebook’s left edge.

As the MagSafe cable charges your laptop, this frees up the one that comes with your MacBook for use somewhere else. The USB connector acts like a port replicator, and links your notebook to the three USB plugs located at the rear lower right-hand side of the display. This is conveniently placed for connecting in your iPhone, external Time Machine backup drive and USB mouse all at once.

The USB connector also links audio signals with the LED Cinema Display’s speakers and microphone, and video with the iSight camera. While sound quality from the 2.1-channel speakers is reasonable, it’s not going to fill the rooms around you. Oddly, as the speakers are at the back of the unit, sound is projected from away from you – so keep this in mind if someone has a desk behind your display.

Video conferencing with the iSight camera and built in microphone worked without a flaw, although your head should be positioned fairly close to the top edge where the camera is, otherwise, you’ll appear a bit short. A useful addition here could be external, non-USB headphone and microphone jacks, but you can resort to the ones on your notebook.

Unlike Apple’s other external displays, this is the first to use LED backlights. Advantages of this technology over fluorescent backlights include lower power consumption, a brighter, whiter image, more accurate colours and a potentially thinner design. Much of these advantages appear with the LED Cinema Display. Whites are very bright, colours are vibrant and pure, and black levels are whisker-close to true back. The display also demonstrated smooth shade graduations between light and dark greys, and colour depth is extensive.

Like its name suggests, the LED Cinema Display is great for watching movies – and does so with dazzling colours and fluid motion. The 1,920 by 1,200 resolution means you can watch 1080p (full HD) videos without losing any detail. However, it’s a shame you can’t plug a Blu-ray player directly into the display, as there are no HDMI, S-Video or component connectors, and MacBooks don’t yet come with built-in Blu-ray disc players.

On the downside, the screen has a glossy finish, which attracts reflections and is something to consider if you plan to use your monitor facing a window.

If you appreciate, and are happy to pay for, a screen that looks wonderful and will enhance any design-conscious environment, then the LED Cinema Display is a good choice. As a MacBook ‘docking station’, the LED Cinema Display is clever, functional and a perfect complement. If you’re the type to buy a MacBook in the first place, you will be familiar with the premium paid for Apple gear – and it’s here that the display loses some appeal.

At $1,499, plus another $155 for a three year AppleCare Protection Plan, there are many other less expensive, equally well-equipped products to choose from. Also, the lack of compatibly with older Apple and non-Apple equipment limits its versatility.