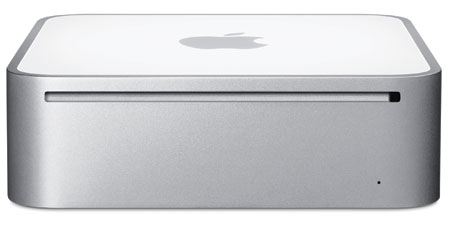 Apple’s long-awaited update to the Mac mini addresses just about every concern a Mac Mini fan of old could have had. The pricing for the upper-tier model is a little high, but it’s otherwise an excellent general purpose computing system.

The new Mac mini looks an awful lot like the old Mac mini, which in practical terms means it’s got the same design as it had several years ago, and doesn’t look a whole lot like any other Mac any more. The iMacs have moved on, and the new MacBook and MacBook Pro lines have largely gone over to the “unibody” Aluminium design. It does still share some design ideas with the entry level MacBook, and that design is actually more than skin deep.

From the front, the Mac mini still presents the same clean design, with a slot loading DVD drive – upgraded to a writer this time around in all models – and ports galore to be found at the back. From left to right, you get power, ethernet, Firewire 800 (upgraded from 400 in the older models), Mini DVI and MiniDisplayPort connectors, five USB 2.0 ports (an increase of one port over the older model) and standard headphone and microphone jacks. It’s a simple design that’s easy to install with pretty much any keyboard, mouse or monitor. The MiniDisplayPort connector gives it compatibility with Apple’s newer Cinema Displays, and a MiniDVI to DVI connector part is included in the box, so you can hook it up to any DVI-compatible LCD monitor, which is most of them. A DVI to VGA adaptor is available, but Apple will charge you $45 for it.

The bigger changes to the Mac mini are internal, and they’re long overdue. It’s been two years since the last upgrade, and that’s a long time in computing terms. Practically an ice age, and most Mac fans had all but given up on the entry level Mac mini, which had become progressively worse and worse value as Apple let its technical specifications fall behind the PC crowd. The new update addresses just about every criticism that could be thrown the Mac mini’s way. The processor shifts from a T5600/T7200 Core 2 Duo to a P7350 Core 2 Duo running at either 2.0 or 2.26Ghz, with faster memory (either 1 or 2GB), a DVD writer, 120 or 320GB hard drive and the inclusion of NVIDIA’s GeForce 9400M graphics processor, grabbing either 128 or 256MB of memory from the system. As with current Mac lines, the iLife ’09 suite is included and pre-installed. All told, the Mac mini offers a very similar solution to the one you’ll find in Apple’s entry level plastic Macbook at the moment, and while it’s a definite step up for the Mac mini, it does introduce one particular challenge. Our review system was the upper tier Mac mini with a 320GB hard drive and 2GB of memory, although it didn’t have the truly top-tier 2.2.6GHz processor.

It shouldn’t come as a huge surprise that the new Mac minis are faster than the old ones. You’d expect that. As a base level “headless” Mac, the mini’s well situated as a general purpose PC, and the style of the unit does make it somewhat suitable as a living room PC, although clearly it’d be more enticing with the addition of a TV tuner and/or a Blu-Ray drive. The former could be added, but the latter remains a pipe dream – for now.

To get a comparative idea of the Mac mini’s performance, we ran the OS X benchmarking suite Xbench over the Mac mini and several other models in Apple’s range. Xbench returns an overall score that doesn’t represent any particular application, but does provide a good comparative detail between Mac systems. The Mac mini managed a respectable score of 118.25. By comparison, a 2006-era MacBook bumped up to 3GB of memory scores a 92.04 on the same test, a new 2009-era top of the line iMac 199.34 and last year’s iMac managed a score of 169.98.

Apple’s pricing for the Mac mini – and especially the $1,399 top end model we reviewed – does present something of a challenge, and once again we’re drawn back to the plastic MacBook. It’s $250 more, and has slightly less hard drive storage, but you could easily spend that on a decent keyboard, monitor and mouse, and there’s nothing stopping you hooking up that same plastic Macbook to an external screen you already owned. The same isn’t true of the entry level $1,049 Mac mini, which makes it somewhat curiously better value.

If you’re after an entry level way to get into OS X and you’ve already got yourself a decent screen, keyboard and mouse, Apple’s refresh of the Mac mini is very welcome indeed, but at the same time, it’s worth considering all your Mac options when shopping if you’re looking at the higher-end model.