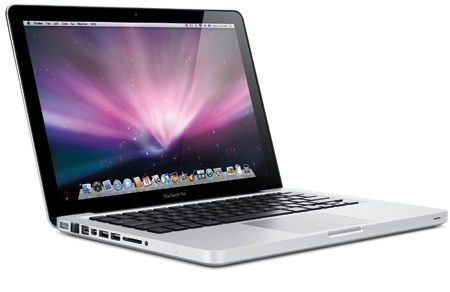 The new Apple MacBook Pro – Apple’s latest refresh of its Macbook lines now gives the smaller screen models the “Pro” moniker, heralds the return of Firewire and greatly improves battery life at the cost of ease of replacement. For upgraders and new Mac buyers alike, this is an exceptionally capable system with tons of appeal.

While Apple still sells something that’s called a “Macbook”, that unit is based on an older plastic body design, and given its modest specifications and aged architecture, it’s a tough sell against the new 13″ “Macbook Pro” lines. These are pretty clearly the evolutionary descendants of the first aluminium “unibody” Macbooks introduced in October last year that drew criticism dropping Firewire and having slightly poorer screens than their “Pro” counterparts.

Having picked up the “Pro” moniker, Firewire returns and is quicker with a single Firewire 800 port, as well as a new feature in the form of an inbuilt SD card reader. In the PC space, this is nothing new, but it’s an interesting inclusion from Apple, and available across the entire Macbook Pro line. The backlit keyboard is now standard across the Macbook Pro lines, but annoyingly the choice of glossy or matte screen isn’t, and if screen glare annoys you you’re left with only the 17″ Macbook Pro line offering it. One oddity is that there’s a single input for audio line in/out, so audio recorders will need to utilise USB connected microphones or headphones as they work.

Apple offers the 13″ Macbook Pro in a two basic configurations — an $1999 entry point model (2.26GHz Core 2 Duo, 2GB RAM, 160GB HDD) and a $2,399 model (2.53Ghz Core 2 Duo, 4GB RAM, 250GB HDD). It’s also possible to upgrade memory at the time of purchase, although given the hideous prices Apple charges for memory upgrades you’d do well to shop around. Both of the 13″ Pro models feature integrated NVIDIA GeForce 9400M processors with 256MB of onboard memory, a slight step below the optional 9600M GT chip that can be optioned on the 15″ and 17″ Pro models.

There’s a lot to like about the Macbook Pro 13″ design aside from the aesthetics. While notebook keyboards will never be ergonomically wise, the Pro’s keyboard is still comfortable for the most part, and the backlighting works well and can be adjusted incrementally. The multi-touch capable trackpad that acts like a single large button does have something of a learning curve to it; some will love its simplicity while others may find themselves with tied fingers for a while.

On the pure performance front, the 13″ Macbook Pro impressed us.

Our review model was the entry level system 2.26GHz system. Using the free Xbench suite of testing tools (www.xbench.com), the Macbook Pro 13″ 2.26GHz reported an impressive overall score of 122.43. To give that a comparative basis, a 3 year old white plastic Macbook with a 2GHz Core 2 Duo and 3.3GB of RAM gives a score of 94.03. Given the general three year Applecare warranty, this does indicate that the new Macbook Pro 13″ will make a pretty decent replacement for ageing Macbooks already in service.

As with other Pro line Macbooks, the new 13″ models now feature an integrated battery. The annoyance of the battery not being removable varies depending on who you ask, but it’s clearly less convenient than being able to pop out one battery and replace it, whether that’s for repair purposes or just taking along a secondary battery.

Having said that, Apple tries to compensate for the inbuilt annoyance with bold battery claims of “Up to seven hours wireless productivity”. We put this to the test in a rigourous fashion, leaving a refreshing web page open on a wireless connection while playing a DVD back full screen, full brightness and at moderate volume. Our fully charged review sample managed an impressive four and a half hours before conking out. Given the DVD playback is by far the most taxing part of that test, for once a battery life claim might just live up to the hype, and we’re impressed.

If you’ve been holding off on upgrading an older Macbook, this is an excellent upgrade choice. If last year’s slightly underwhelming Unibody models didn’t impress you, these will. First time Mac buyers will find a lot of value here too. Despite its “Pro” marking, the 13″ Macbook delivers a lot of wide appeal.